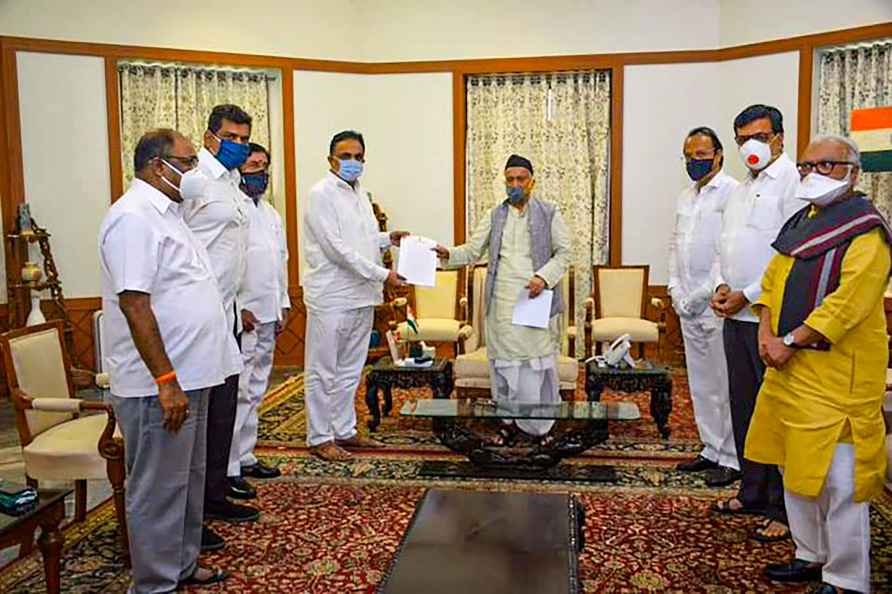 Mumbai, Nov 28 : Certain media reports claiming that the beleaguered Maharashtra Governor Bhagat Singh Koshyari was planning to quit are 'pure speculation', official sources said here on Monday. The sources were referring to reports that the Governor had hinted to certain persons of his desire to be relieved of the post after he had been under fire for over a week after his comments on Chhatrapati Shivaji Maharaj. However, the sources have scotched all such speculative reports and said no credence should be given to them. Five days ago, the Nationalist Congress Party(NCP)'s Leader of Opposition Ajit Pawar had also revealed how the Governor had told him that he was no longer interested in the post and wanted to be relieved from his duties. "He had himself told me that he is no longer interested in continuing in Maharashtra and was keen to be relieved of his post," the NCP leader claimed at a media interaction on Nov. 23. "I told him (Koshyari) that he should simply request his seniors to give him some other posting," Pawar contended, while saying he prayed to the Almighty to give 'sense' to the Governor, who was appointed to the state in September 2019. Pawar even wondered whether Koshyari was "deliberately making such contentious statements to compel the Centre to transfer him" away from this state, though there was no rebuttal from the Raj Bhavan. In today's media speculation, Sena Sena (UBT) Chief Spokesperson Sanjay Raut termed it as "great", even as the Opposition Maha Vikas Aghadi is planning a state-wide 'shutdown' to protest against the Governor. NCP MP Supriya Sule commented what is the point in just offering to quit. "He should just send in his resignation to the President". Koshyari, 80, has been under a fresh assault for his statement that Chhatrapati Shivaji Maharaj was "an icon of the old era" and persons like the late Dr. B.R. Ambedkar or Union Minister Nitin Gadkari are the modern-day icons. The comments evoked sharp reactions from all political parties -- the ruling alliance of BJP-Balasahebanchi Shiv Sena, the opposition Congress, Nationalist Congress Party, Shiv Sena-UBT, Maharashtra Navnirman Sena, the direct descendents of Chhatrapti Shivaji Maharaj, organisations like Maratha Brigade, Jijau Brigade, etc, who demanded his ouster from the state. Chhatrapati Udayanraje Bhosale, the 13th direct descendent of the great Marath warrior-king, attacked the Governor, calling him a "third class" person who deserved to be shunted out of the state or to an old-age home for his statements, as protests continue in the state since a week. In his tenure here, the Governor managed to raise the hackles of the then Maha Vikas Aghadi government on several occasions, besides statements on Mahatma Jyotirao Phule, the contributions of the Marwari-Gujarati communities to the development of the state, and now on Chhatrapati Shivaji Maharaj, etc. /IANS