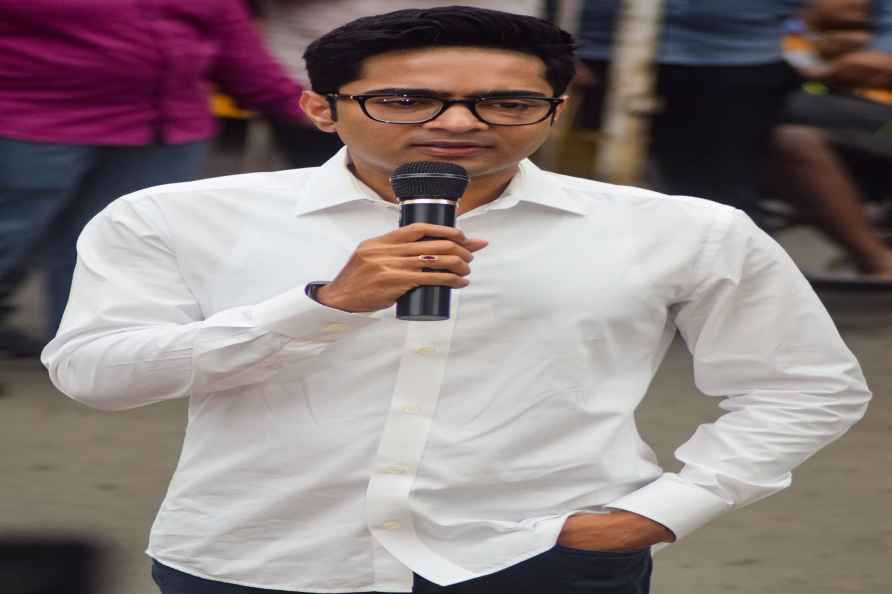 [Kolkata: Trinamool Congress (TMC) MP Abhisekh Banerjee speaks with media after meeting a police officer who got injured during BJP's 'Nabanna Abhijan' protest march on Tuesday, outside a hospital in Kolkata, Wednesday, Sept. 14, 2022. ( /PTI] Kolkata, Sep 14 : Trinamool Congress national General Secretary Abhishek Banerjee on Wednesday praised the patience shown by the police in handling the situation during BJP's march to state secretariat Nabanna on Tuesday, saying that had he been in the place of the police, he would have shot the 'miscreants' who resorted to vandalism in the head. Banerjee, who represents the Diamond Harbour Lok Sabha constituency, went to the state-run SSKM Medical College and Hospital on Wednesday to meet Debojit Chattopadhyay, an assistant commissioner of police undergoing treatment at the hospital after he was severely injured during the clashes on Tuesday. "I salute Debojit Chattopadhyay for showing such patience. Had I been at his place, after a police vehicle was torched, I would have shot the miscreants in the head. The police could have easily resorted to firing. But under Chief Minister Mamata Banerjee, the police are restrained," Abhishek Banerjee said after coming out of the hospital. Reacting to Banerjee's statement, state BJP President Sukanta Majumdar said the Trinamool leader is speaking the language of a typical hooligan. "First the Chief Minister and now her nephew is encouraging people to be trigger-happy," Majumdar said. Meanwhile, Abhishek Banerjee also ridiculed the leader of opposition in the West Bengal Assembly, Suvendu Adhikari, on his resistance on Tuesday from being handled by women police personnel. "Probably Adhikari has a fascination towards men. Probably BJP leaders do not accept bribes from women," Abhishek Banerjee said. On Tuesday, Adhikari had alleged that women police personnel were deliberately deputed to handle him. He was also seen shouting at the women police personnel trying to put him in a prison van. "You are a lady. Do not touch my body," Adhikari was heard shouting. Reacting to Abhishek Banerjee's comments, Majumdar said that such remarks reveal his shoddy culture and mindset. "How can he make such slating comments about the leader of the opposition. Actually, he is out of his mind because of the imminent fear and hence he is losing all control over his language," Majumdar said. Abhishek Banerjee is facing a probe by the ED in connection with the coal smuggling scam in the state. /IANS