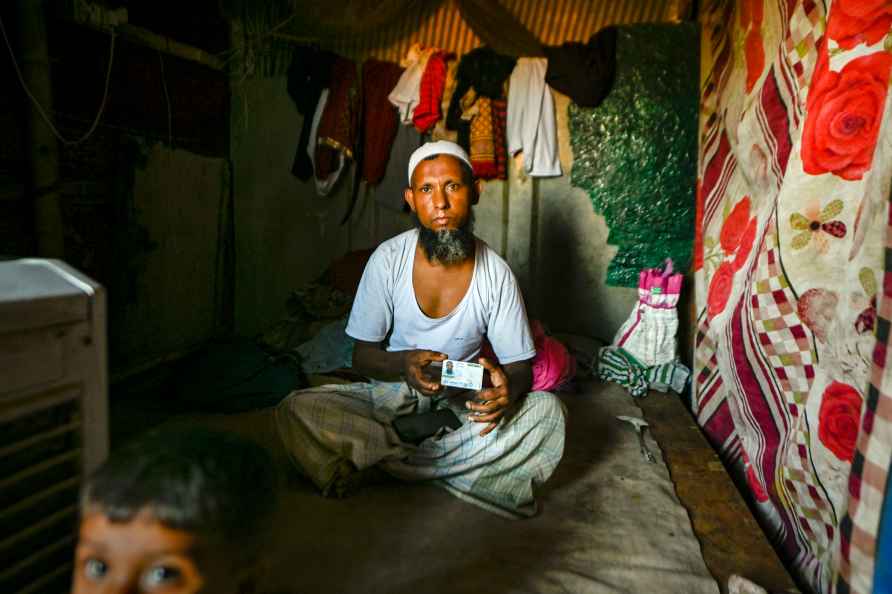 [**EDS: TO GO WITH STORY** New Delhi: Kabir Ahmed showes his UNHCR ID card at the Rohinya refugee settlement area in Kalindi Kunj, New Delhi, Wednesday, Aug. 17, 2022. The MHA made it clear that it has not given any direction to provide EWS flats to Rohingya Muslims in Delhi. ( /PTI] New Delhi, Aug 17 : The Vishwa Hindu Parishad (VHP) on Wednesday expressed shock at Union Urban Development Minister Hardeep Singh Puri's statement on settling illegal Rohingya migrants in the country and said that the Rohingyas should not be provided housing facilities and must be deported. This statement by the VHP comes after Puri's statement created a huge furore which was later clarified by the Home Ministry on Wednesday afternoon stating that it has not given any directions to provide economically weaker section (EWS) flats to illegal Rohingya migrants at Bakkarwala in New Delhi. The clarification came after the Union Minister lauded a decision to shift nearly 1,100 Rohingya refugees in Delhi to flats equipped with basic facilities. With respect to news reports in certain sections of the media regarding illegal Rohingya migrants, the Ministry of Home Affairs (MHA) has clarified that it has not given any directions to provide EWS flats to illegal Rohingya migrants at Bakkarwala in New Delhi, said the Home Ministry. The Ministry added that the Delhi government proposed to shift the Rohingyas to a new location. The MHA has directed the Government of National Capital Territory of Delhi to ensure that the illegal Rohingya migrants continue to live at the present location as the MHA has already taken up the matter of their deportation with the concerned country through the MEA, it said. "Illegal foreigners are to be kept in detention centres till their deportation as per law. The Delhi government has not declared the present location as a detention centre. They have been directed to do the same immediately," the MHA added. Earlier, Puri in a tweet had said, "India has always welcomed those who have sought refuge in the country. In a landmark decision all #Rohingya #Refugees will be shifted to EWS flats in Bakkarwala area of Delhi. They will be provided basic amenities, UNHCR IDs and round-the-clock police protection." However, the VHP's international joint general secretary Surendra Jain told IANS that any such decision to shift the Rohingyas will not be aligned with the spirit of the Citizenship Amendment Act (CAA). "The people know that the Rohingyas have been involved in anti-social or anti-national activities. We should also see that Hindu refugees from Pakistan and Bangladesh are still living in deplorable conditions at camps. This is against the spirit of CAA," said Jain. The VHP's central working president, Alok Kumar, said, "We are shocked to hear a statement of Union Urban Development Minister Hardeep Singh Puri terming the Rohingyas as refugees and allotting them the EWS flats in Bakkarwala, Delhi." "We might remind Puri of the statement made by the Union Home Minister Amit Shah in Parliament on December 10, 2020, declaring that the Rohingyas will never be accepted in India (Rohingyas ko kabhi bhi sweekar nahi kiya jaega)." /IANS