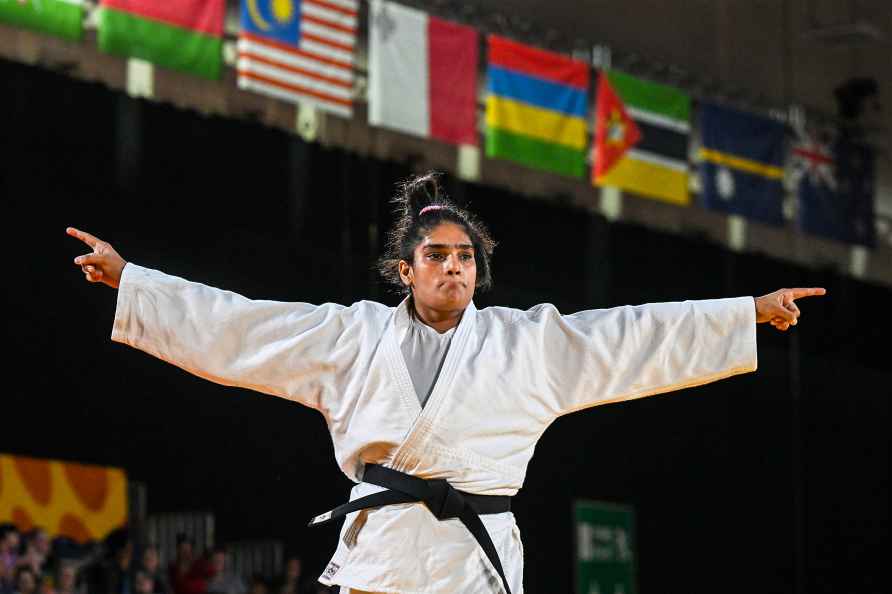 [Birmingham: India's Tulika Maan reacts after winning the semi-finals match against New Zealand?s Sydnee Andrews in the women's 78 kg category Judo event at the Commonwealth Games 2022 (CWG), in Birmingham, UK, Wednesday, Aug. 3, 2022. ( /PTI] Birmingham, Aug 3 : India's Women's Fours lawn bowls team, which is being hailed for winning a historic maiden gold medal in the Commonwealth Games, came into the event in Birmingham without playing a single competitive match on natural grass in the run-up to the event. The players would probably not even remember when they last played on natural grass, since international events are mostly held on synthetic surface. They had not even practiced much with the new balls that they bought after reaching London so as to avoid the high excise duty back home, officials claim. Yet, the team went on to spring one surprise after another to win a historic maiden gold, beating a strong South Africa team that had won silver in the 2018 edition. At home, the team had its training camps at the Yamuna Sports Complex in Delhi, which has synthetic turf for bowling, while the event held here at the Royal Leamington Spa was played on natural bowling greens. Despite the handicap, which is significant given the speed at which the balls travel on synthetic and natural grass, they had the determination to overcome the hurdle. Though the team had a five-day camp in London just before reaching Birmingham for the Commonwealth Games, adjusting to the new surface was a big challenge. "The only natural grass bowling greens in India are at the Royal Calcutta Golf Club, while the ones at the Yamuna Sports Complex in Delhi and in Ranchi, from where two of the four members hail, are synthetic turfs. They had a short camp in London before reaching Birmingham. So, it's a great performance by the players as they had not practiced a lot on natural grass before coming to England," informed Krishan Bir Singh Rathi, the treasurer of the Bowling Federation of India, who is in Birmingham as manager of the men's team. Another official claimed that they purchased the balls with which they bowled only after reaching London. In lawn bowls, the balls are made with composite material and are made in such a way that they have extra weight, called bias, at one side, so that it can swing toward the direction of the extra weight and either swing towards or away from the jack so as to score points. The balls also have specific weight and size so as to fit the palm-size and therefore do not fall down when the hand is taken back to roll them down towards the jack So, practicing with the balls is a must so as to get used to the bias and palm size and grip. All the Indian players managed to get accustomed to these technical details during the 5-6 days of practice they managed to get by booking bowling greens at a club in London on an hourly basis. "And the tactic seems to have worked as the players got used to the speed of the natural grass. The players were given a free hand this time to choose their partners and work out their plans," said Rathi. He said the sport, brought to India by the British as a recreational activity for their subjects in the Raj, was for those who couldn't participate in more strenuous sports like cricket, football, golf or horse riding. It was re-introduced in India by former India Olympic Association (IOA) secretary-general Randhir Singh at the start of this century in time for India's participation in the home Commonwealth Games in 2010 when they got a host quota. Most of the players that have taken up the sport come from poor backgrounds and started late as age and physical fitness are not the criteria. With little support from the government, through SAI and the Sports Ministry-funded schemes like Mission Olympic, Target Podium Scheme etc, the players used their own resources and those provided by the IOA to participate in the Asian and Asia-Pacific competitions. Despite all these hardships, the players have exceeded all expectations by the sheer dint of their handwork, dedication, determination and devotion. /IANS