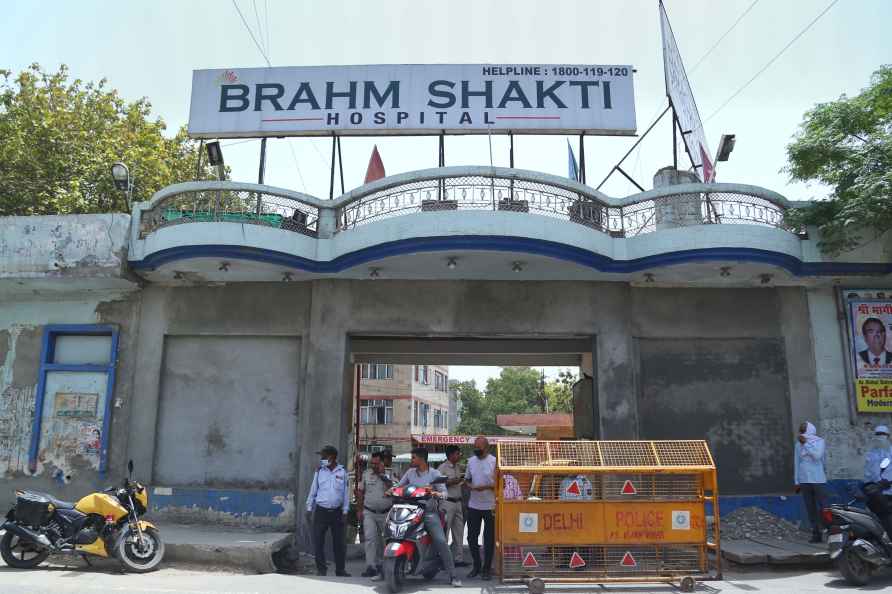 New Delhi, June 20 : A car caught fire after it rammed into a divider of a road in the national capital on Monday morning, a Fire Department official said. The official informed that they received a call about the car catching fire around 9.45 a.m. on a road near Moolchand Metro station bus stop in south Delhi after which as many as two fire tenders were immediately pressed into service. The car was going in the direction of Chirag Dilli from the Lajpat Nagar side. "The fire was doused in 15 minutes by 10.05 a.m.," the official told IANS. Meanwhile, the 26-year-old woman driving the ill-fated car received minor injuries and was shifted to nearby hospital for treatment by the passerby. "She is currently admitted to Moolchand hospital where her condition is said to be stable," the official added. /IANS

73 dead as migrant boat capsizes near Syrian shore
[Tripoli: Mourners carry the coffin of Palestinian Abdul-Al Omar Abdul-Al, 24, who was on a boat carrying migrants from Lebanon that sank in Syrian wa

Fire at factory in Delhi's Narela, no injuries
New Delhi, Sep 23 : A fire broke out at a footwear manufacturing factory in the Narela area of the national capital on Friday, a fire department offic

Chennai, Sep 23 : Strict measures are in place to retrieve a bronze idol of Kalasamhara Murthy of Sri Kasi Viswanatha temple at Muthamalapuram in Thanjavur from Christie's in the United States, the id […]

New Delhi, Sep 23 : The Supreme Court on Friday said it will list the pleas challenging the Centre's decision to abrogate the provisions of Article 370, which gave special status to Jammu and Kashmir, […]