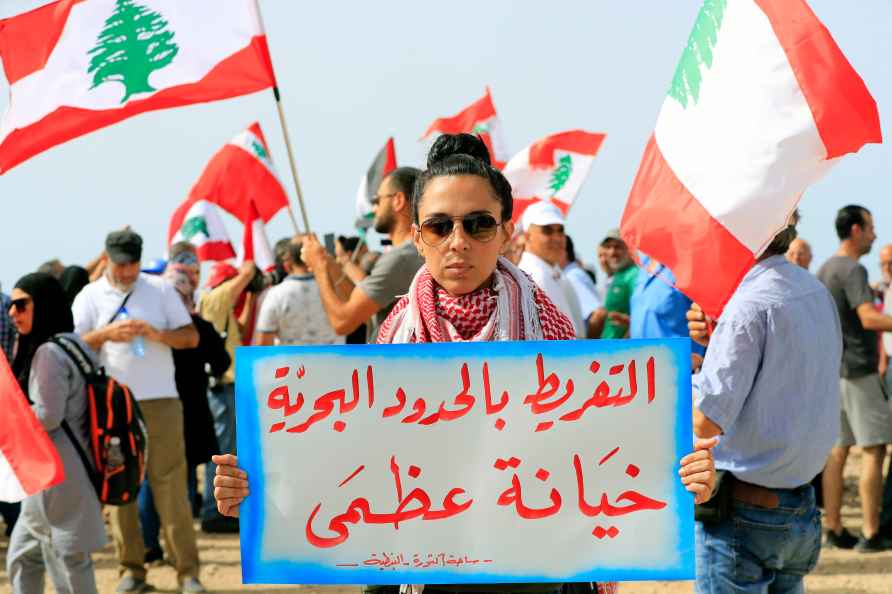 [Naqoura: A Lebanese activist holds a placard in Arabic that read: "Forsaking our maritime borders is a great betrayal," during a protest in the southern border town of Naqoura, Lebanon, Saturday, June 11, 2022. The protest was held to demand a clear and unified Lebanese position that preserves Lebanon's right to marine gas wealth, including Line 29 which refers to the disputed maritime boundary between the two countries. /PTI] Beirut, June 11 : The Lebanese Labor Minister has called for international support for Lebanon in securing a quick and safe return of Syrian refugees inside the country to their homeland, the National News Agency (NNA) reported. "Lebanon can no longer bear the burden of hosting Syrian refugees as the country has suffered heavy economic losses, not to mention its high unemployment and crime rates, as a consequence of hosting the largest number of displaced per capita," Mustafa Bayram was quoted by NNA as saying on Friday. The Lebanese Minister made the remarks during his virtual participation in the 110th session of the International Labor Conference held in Geneva, Xinhua news agency reported. "It is the right of Syria to take back its citizens for them to rebuild their country with international organisations giving them aid inside their country," Bayram said. He also urged international compensation for Lebanon's losses in having hosted Syrian refugees for more than a decade. In May, Lebanese Social Affairs Minister, Hector Hajjar told an international conference that Lebanon wants a compensation of $30 billion for hosting Syrian displaced people. Lebanon remains the country hosting the largest number of refugees per capita, with the government estimation of 1.5 million Syrian refugees. /IANS

Los Angeles, Sep 14 : Oscar-winning documentarian Laura Poitras slammed the Venice and Toronto film festivals for "providing a platform" for the Clinton family to engage "in a kind of whitewashing." […]

New Delhi, Sep 14 : Apple has fixed fresh vulnerabilities in iOS and macOS, including a zero-day flaw being actively exploited by hackers. The zero-day flaw, known as CVE-2022-32917, allows a ma […]