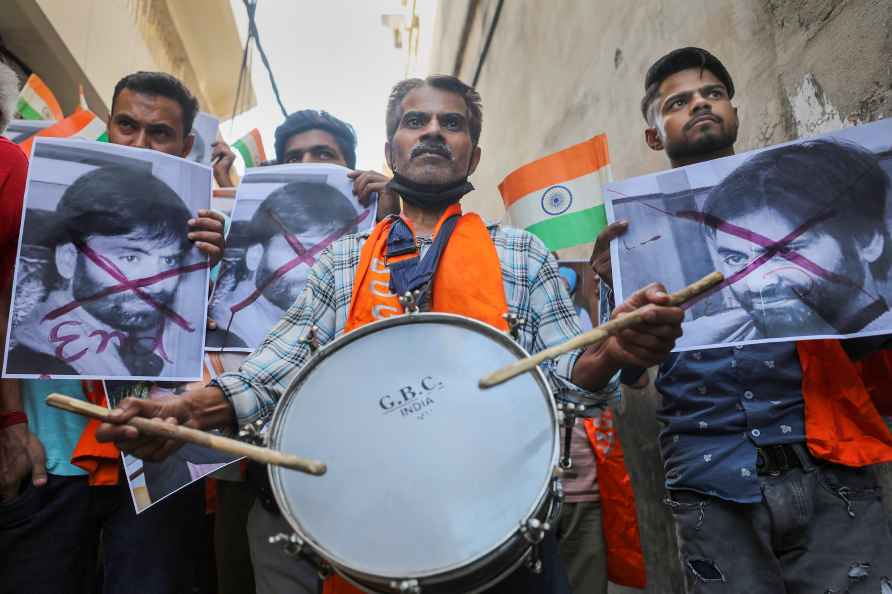 [Jammu: Activists of Shiv Sena Dogra Front play drums during a celebration ahead of the sentencing of JKLF chief Mohammad Yasin Malik in a terror case by a special NIA court in New Delhi, in Jammu, Wednesday, May 25, 2022. ( /PTI] New Delhi, May 25 : Kashmiri separatist leader Yasin Malik, who has been convicted in a terror funding case, on Wednesday told the court that he has been following "Gandhian principles" after giving up arms. Malik, who is awaiting the quantum of punishment for the offences in the case, was produced before the Special NIA judge, Patiala House Court amid tight security. During the course of the hearing, Malik said: "After dropping weapons, I have followed principles of Mahatma Gandhi. Since then, I have been following non-violent politics in Kashmir." The National Investigation Agency (NIA) argued for the death sentence for Malik. The court also had directed the NIA authorities to assess his financial situation in connection with the terror funding case prior to Wednesday's hearing. The accused is facing a maximum punishment of the death penalty, while the minimum sentence can be life imprisonment in the cases in which he is involved. Malik has been charged with hatching a criminal conspiracy, waging war against the country, other unlawful activities, and disturbing peace in Kashmir. He had pleaded guilty in the matter. On the last date of the hearing, he told the court that he was not contesting the charges levelled against him, including section 16 (terrorist act), 17 (raising funds for the terrorist act), 18 (conspiracy to commit terrorist act), and 20 (being member of a terrorist gang or organisation) of the UAPA and sections 120-B (criminal conspiracy) and 124-A (sedition) of the Indian Penal Code. The present case is related to the various terrorist outfits Lashkar-e-Taiba (LeT), Hizbul-Mujahideen (HM), Jammu and Kashmir Liberation Front (JKLF) and Jaish-e-Mohammed (JeM) backed by Islamic State perpetrating the terrorist and secessionist activities to disturb Jammu and Kashmir. /IANS

Monkeypox likely to cause more deaths: WHO

New Delhi, Aug 1 : Amid four deaths due to monkeypox outside Africa, including India, the World Health Organization (WHO) has said that the infectious disease is likely to lead to more fatalities. […]

After death threats, Salman Khan gets a gun license

Mumbai, Aug 1 : The Mumbai Police have granted a licence for a personal gun to Bollywood star Salman Khan following death threats in June against him and his father, veteran writer Salim Khan, officia […]

Surat, Aug 1 : Goldi Solar, India's most quality-conscious solar brand, on Monday announced its support for the government's 'Har Ghar Tiranga' campaign making it the first company to pledge to distri […]