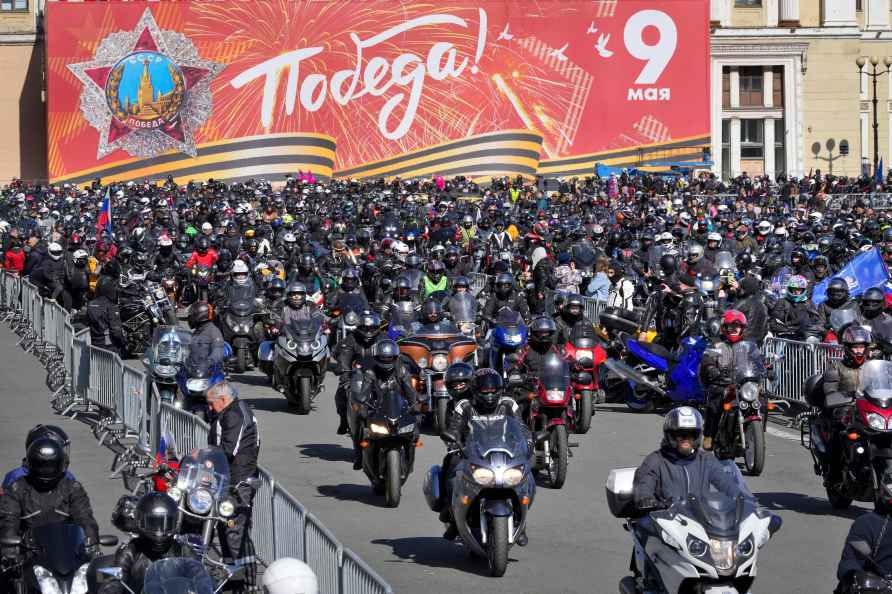 [St. Petersburg : Bikers ride at the Palace Square decorated for the Victory Day military parade which will take place on May 9 to celebrate 77 years after the victory in World War II, during a festival marking the beginning of the motor biking season in St. Petersburg, Russia, Saturday, April 30, 2022. The sign reads 'Victory!'. /PTI] London, April 30 : Russian President Vladimir Putin is set to declare an "all-out war" on Ukraine "within days" to enable Moscow to launch a general mobilisation of the population, according to Russian sources and Western officials. Russia invaded Ukraine on February 24 in what Putin called a "special military operation" to "demilitarise and de-nazify" Ukraine and barred the use of the word "war", thinking it would be over in a few weeks, The Daily Mail reported. However, army chiefs, frustrated that the invasion has now stretched into the third week, have called on the President to declare war which would enable a mass mobilisation of Russian troops and an escalation in the conflict. Britain's Defence Secretary Ben Wallace said that Putin might use Russia's victory day parade on May 9 to announce the mass mobilisation of his reserves for a final push in Ukraine. It comes as former NATO chief Richard Sherriff warned the West must "gear itself up" for a "worst case scenario" war with Russia in Ukraine. A Russian military source told the Telepgraph: "The military are outraged that the blitz on Kiev has failed. People in the army are seeking payback for failures of the past and they want to go further in Ukraine." Earlier this week, the Russian military was said to be furious that Putin had downsized the invasion of Ukraine and called for a new escalation of the conflict. /IANS