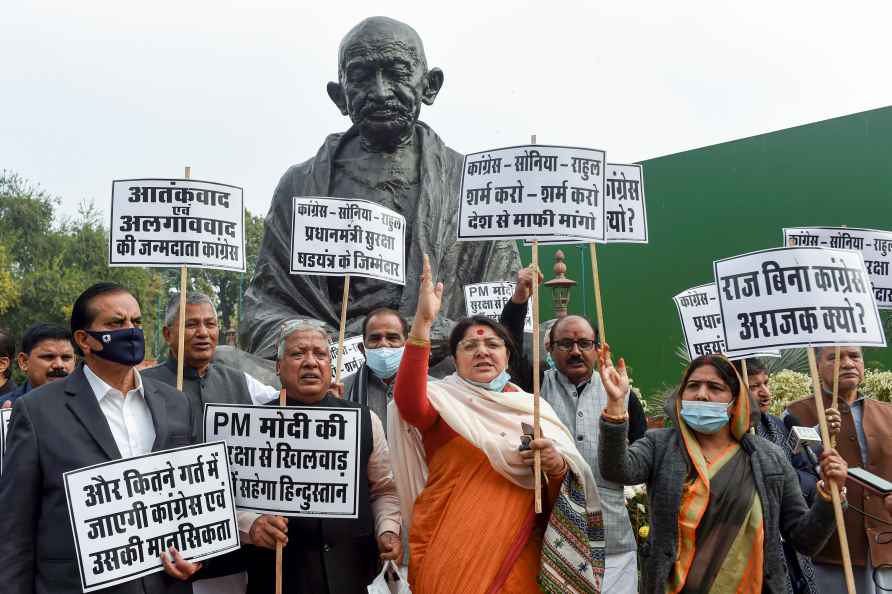 [New Delhi: BJP MPs protest against Congress party over Ferozepur incident, in front of Mahatma Gandhi statue at Parliament, in New Delhi, Friday, Jan.7, 2022. Prime minister?s convoy was stranded on a flyover due to a blockade by protesters in Ferozepur on Wednesday after which he returned from poll-bound Punjab without attending any event, including a rally. ( /PTI] New Delhi, Jan 7 : Aiming to corner the Congress over the recent "lapse" in the security of Prime Minister Narendra Modi during his visit to Punjab, the BJP is all set to launch a nationwide campaign. On Friday, the BJP MPs will stage a silent protest near the Mahatma Gandhi statue in the Parliament House complex against the incident. Along with this, the party has also made a strategy to go to Raj Bhavans across the country and submit memorandum. Similarly, it has decided to hold series of protests to "expose" the Congress nationwide. Further the BJP has also devised a strategy to respond to Congress' "political card" of harassment of a Dalit Chief Minister (Charanjit Singh Channi) by it. For this, the party's Scheduled Caste Morcha and Dalit leaders will stage protest before Ambedkar statue. Meanwhile, it has decided to write a letter to Sonia Gandhi regarding the "lapse by the Punjab government" in the Prime Minister's security and the "attitude" of the Congress' high command over it. The BJP MPs will stage the silent dharna at the Parliament House complex at 11 am on Friday. Furthermore, the party's veteran national and state level leaders will go to the Raj Bhavan of their respective states and union territories and will submit a memorandum to the Governor and the Lieutenant Governor highlighting the incident. On Thursday, many BJP Chief Ministers, veteran leaders, national and state unit office bearers, MPs and MLAs chanted 'Mahamrityunjaya mantra' for the wellbeing of the Prime Minister by visiting other Jyotirlingas and other prominent 'Shivalayas' across the country including Kashi Vishwanath, Mahakaleshwar, Omkareshwar. The party's youth cell also protested against the Congress by taking out torch rallies in all the districts of the country on Thursday. /IANS

'The Boys' renewed for Season 4

Los Angeles, June 11 : The superhero series 'The Boys' is getting renewed for its fourth season roughly a week after the release of its third season that has opened to a positive response, reports 'Va […]

Los Angeles, June 11 : Justin Bieber can't feel half his face as it has been paralysed by a rare virus following which he had to cancel his shows in Toronto and Washington, D.C., reports 'Variety'. Th […]

Quetta, June 11 : Lawmakers in Pakistan's Balochistan have accused Sindh of stealing the province's water share, blaming the Indus River System Authority (Irsa) for its failure in ensuring a fair dist […]