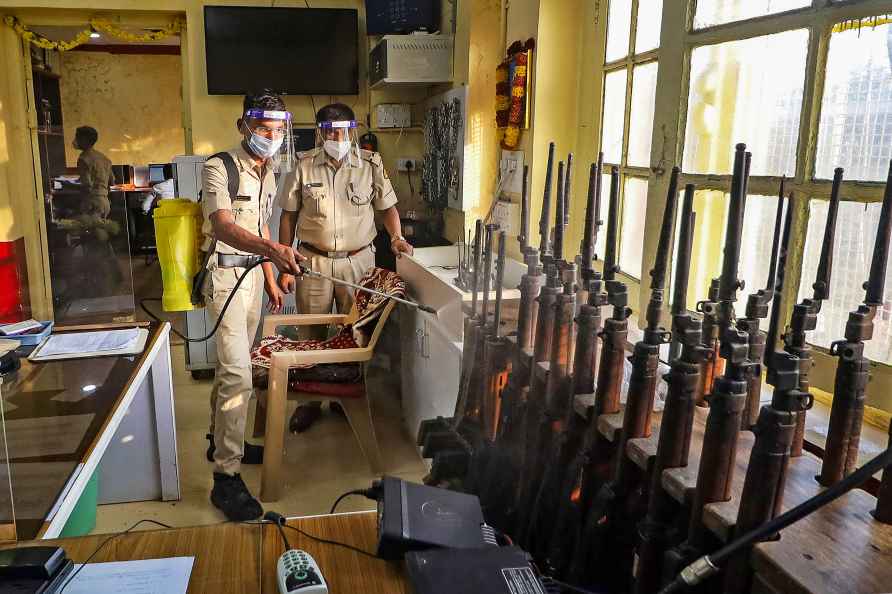 [Bengaluru: A policeman sanitises the Krishna Rajendra Market police station after 15 police officers of the station tested Covid-19 positive, in Bengaluru, Thursday, Jan 6, 2022. ( /PTI] Bengaluru, Jan 6 : As many as 14 police officers attached to City Market police station in Bengaluru tested positive for Covid-19 on Thursday. The incident came to light when the cops were subjected to Rapid Antigen Test (RAT). The tests were conducted in the wake of rapid surge of Covid cases in the city and a cop testing positive in Byatarayanapura police station. DCP West Sanjeev Patil explained that one police sub-inspector, two assistant sub-inspectors and 10 police constables of City Market Police Station have tested positive. All infected persons are home quarantined and the police station has been sealed. The total strength of the police station is 69. The tests have been conducted on 43 cops. The rest are in night duty and they will also be tested, he stated. About 60 police officers attached to Byatarayanapura police station have undergone RT-PCR test on Wednesday following a cop testing positive. Their results are awaited and the police department is getting the police station premises sanitized. With government clamping night curfew and week end curfew, the police department is taking preventive measures to keep the police personnel away from risk of infection. /IANS

Nadal reveals struggles with foot injury, says he can play only after he's numbed his nerves
[Spain's Rafael Nadal poses with his trophy at Alexander III bridge in Paris, Monday, June 6, 2022, after he won Sunday's men's final match at the Fre

Melbourne, June 6 : Cricket Australia (CA) on Monday named Jude Coleman and Dan Marsh as assistant coaches of the all-conquering women's team after the positions fell vacant following the departure of […]

Nadal reveals struggles with foot injury, says he can play only after he's numbed his nerves