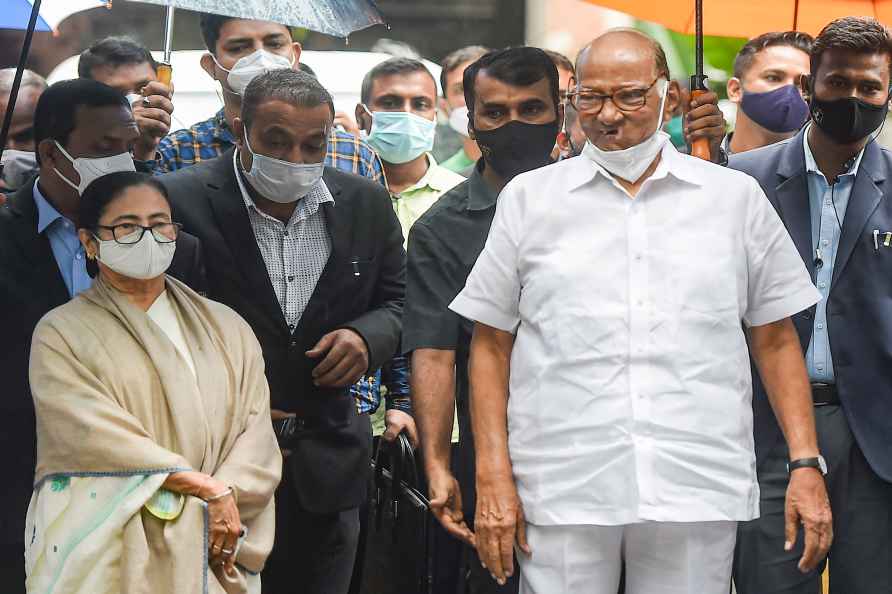 [Mumbai: NCP President Sharad Pawar with West Bengal Chief Minister Mamata Banerjee after a meeting at his residence, in Mumbai, Wednesday, Dec. 1, 2021. ( /PTI] Mumbai, Dec 1 : Taking a broad swipe at the Congress, West Bengal Chief Minister Mamata Banerjee on Wednesday said that there is no UPA left now but called upon all the like-minded Opposition parties to unitedly fight the Bharatiya Janata Party in the 2024 Lok Sabha elections. At her much-anticipated meeting with Nationalist Congress Party President Sharad Pawar, Banerjee discussed the strategy for all Opposition parties to take on the BJP unitedly in the next elections. Pawar, who met Banerjee along with his senior party leaders, said that they held a long discussion on various political issues. "We agreed upon the need to strengthen the collective efforts and commitment towards safeguarding democratic values and ensuring the betterment of the people," he said. Banerjee urged the need for creating "a firm alternative course" as nobody is fighting "ongoing Fascism" in the country. "Sharadji is the senior most leader and I have to come to discuss our political strategies. I am fully agreeable with whatever Sharadji has said," said Banerjee, who is also President of the Trinamool Congress. She said the Shiv Sena is a strong regional party which is fighting the BJP and all such parties must post a collective challenge to the saffron party in the 2024 elections. Lauding Banerjee for sweeping the April-May Assembly polls in her home state, Pawar said her intention for the 2024 elections is clear. "In the current situation, all like-minded forces must unite together at the national level and set up a collective leadership to tackle the BJP." He said the need was to provide a strong alternative leadership, not just today, but for the future election and in this background Banerjee visited to hold "very positive discussions" with all the leaders. Shiv Sena MP Sanjay Raut, who along with Tourism Minister Aaditya Thackeray, met Banerjee last night, said that she is a product of the Congress and has left the party for whatever differences they may have had. "Its their mutual matter and they will sort it out. She has secured a historic win in West Bengal, where not only the BJP, but also the Left and the Congress have been wiped out. All those who left the Trinamool to join the BJP are now coming back," Raut pointed out. The meeting was the prime political highlight of Banerjee's two-day Mumbai trip but she could not meet Chief Minister Uddhav Thackeray as he is currently convalescing after undergoing a spine surgery last month. Banerjee said she was very keen to meet the CM and was unable to do so, but said she prayed for his quick recovery and looked forward to meeting soon in the future. /IANS

[Srinagar: Security personnel during an encounter with militants at Gusoo village on the outskirts of Srinagar, Monday, Jan. 3, 2022. Two militants including a wanted Lashkar-e-Toiba (LeT) terrorist S […]

Govt officers/staff will follow staggered timing to avoid overcrowding: Centre to all its depts.

Govt officers/staff will follow staggered timing to avoid overcrowding: Centre to all its depts. […]