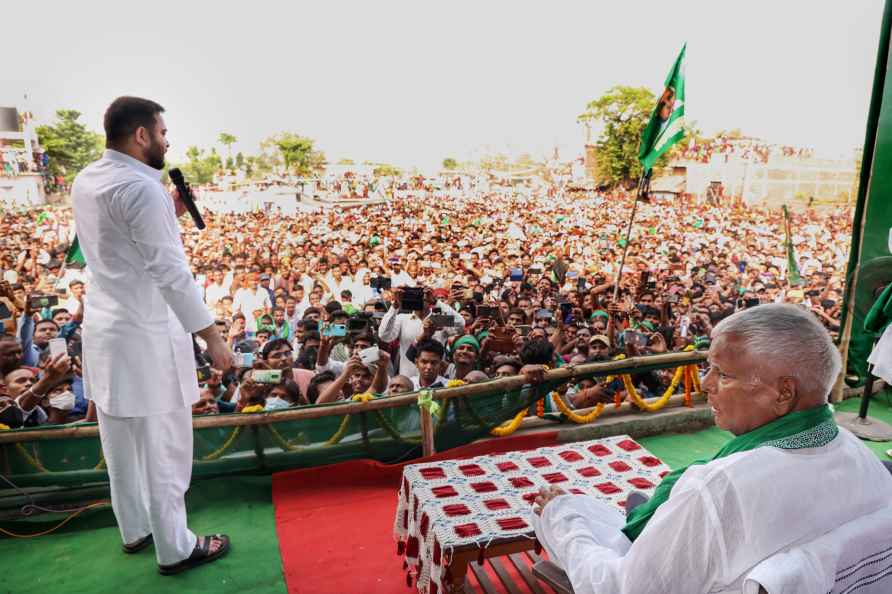 [Darbhanga: RJD Chief Lalu Prasad and party leader Tejashwi Yadav at a rally ahead of the by-elections in Kusheshwar Asthan assembly constituency, in Darbhanga, Wednesday, Oct. 27, 2021. ( /PTI] Patna, Oct 27 : Two controversial words of RJD chief Lalu Prasad have brought him to the centre of Bihar politics ahead of bypolls to Kusheshwar Asthan and Tarapur seats. While campaigning for these two seats, he had used "Bhakchonar" for Congress state in-charge Bhakta Charan Das and "Visarjan" for Nitish Kumar. His taunt on the Congress prompted a sharp reaction from the party leaders with former Lok Sabha speaker Meera Kumar seeking an apology from him. Meera Kumar and other Congress leaders stated that the "Bhakchonar" remark to Dalit leader Bhakta Charan Das amounts to violation of SC-ST Act. Lalu Prasad uttered the "derogatory" word in frustration after Congress party's dismal performance in the 2020 Assembly elections when out of 70 seats given to the party under a coalition pact, it could manage to win just 19. Lalu Prasad had used "Visarjan" for Nitish Kumar on Tuesday to mean that it is an end game for him. Kumar later shot back and said that Lalu Prasad can even get him killed. Lalu Prasad had said: "Tejashwi Yadav tackled him well in Bihar. He has cornered him well and I will do the 'visarjan' (end game) for his remaining term," he said. Thursday is the final day of canvassing for the by-elections with Lalu Prasad addressing rallies in Kusheshwar Asthan and Tarapur. /IANS

Mystery of J.C. Bose's vault remains unsolved for over eight decades
[Bhopal: Children born with congenital disabilities, believed to have been caused by the exposure of their parents to gas leakage in the 1984 Bhopal g

'Waited for long', SC to decide punishment for Vijay Mallya in Jan

New Delhi, Nov 30 : The Supreme Court on Tuesday said it has waited for sufficiently long, and the process to award punishment to Vijay Mallya in a contempt of court, in which he was held guilty in Ju […]

10 water bodies in Delhi to be declared wetlands

New Delhi, Nov 30 : As many as 10 water bodies in the national capital would be declared wetlands by the Ministry of Environment, Forest and Climate Change (MoEF&CC). The identified water bodies […]

'Naa Kosam' song from Nagarjuna's 'Bangarraju' out on Dec 1