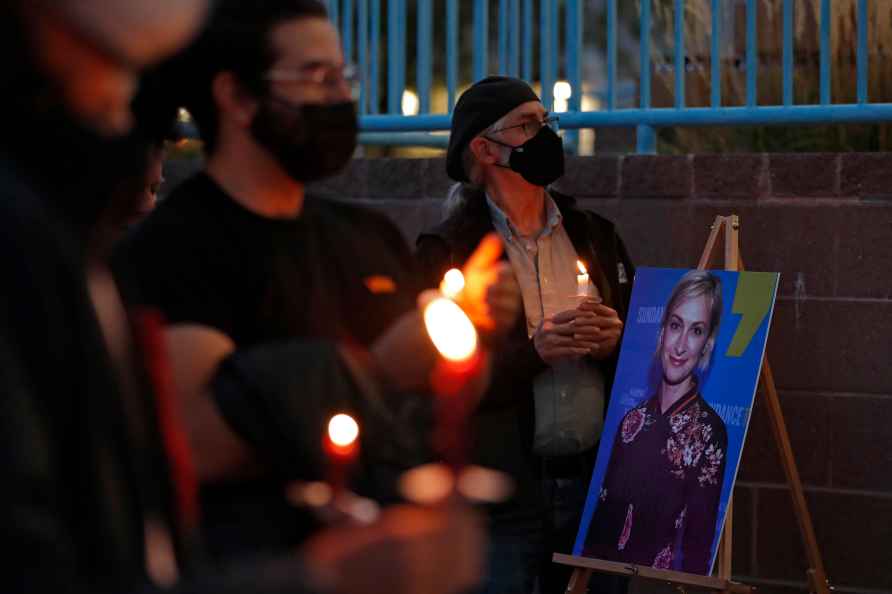 [Albuquerque : New Mexico residents attend a candlelight vigil to honor cinematographer Halyna Hutchins in Albuquerque, N.M. Saturday, Oct. 23, 2021. Hutchins was fatally shot on Thursday, Oct. 21, after an assistant director unwittingly handed actor Alec Baldwin a loaded weapon and told him it was safe to use on the set of a Western filmed in Santa Fe, N.M. /PTI] Los Angeles, Oct 24 : Matt Hutchins, the husband of the late cinematographer Halyna Hutchins, has given a statement regarding the fatal tragedy that occurred on the set of 'Rust' in which a prop firearm discharged and killed Halyna. Matt released a statement through his Twitter alongside a picture of his late wife, reports variety.com. "Halyna inspired us all with her passion and vision, and her legacy is too meaningful to encapsulate in words," he wrote. "Our loss is enormous, and we ask that the media please respect my family's privacy as we process our grief. We thank everyone for sharing images and stories of her life." On Thursday, while Halyna was in New Mexico shooting the western 'Rust;, the cinematographer was shot by a prop gun containing a live round of ammunition. She was transported via helicopter to the University of New Mexico Hospital in Albuquerque, and died shortly after. Authorities have confirmed that veteran star Alec Baldwin discharged the shot that killed Halyna, though an ongoing "shooting investigation" is continuing as to determine key details in the lead-up to the accident. Following her death, colleagues and friends in the industry offered remembrances of the cinematographer. "We lost a truly unique artist, and it pains me to think of the images she never had a chance to create," said fellow cinematographer Stas Bondarenko. Halyna was selected a rising star by American Cinematographer magazine in 2019 and was making a name for herself on productions such as 'Archenemy', 'Snowbound', 'Darlin', 'Blindfire' and 'The Mad Hatter'. /IANS

Yediyurappa's granddaughter left her 9-month-old baby in other room, before ending life
[Bengaluru: Undated image of former Karnataka chief minister BS Yediyurappa with his granddaughter Soundarya Neeraj. Soundarya was found hanging at he

78 days in jail gave opportunity to introspect: Cong candidate in Punjab
[Jalandhar: Delhi Chief Minister Arvind Kejriwal acknowledges greetings of supporters as his convoy passes through a road during his visit ahead of th

Nadal one win away from record 21st Grand Slam
[Melbourne: Daniil Medvedev of Russia celebrates after defeating Stefanos Tsitsipas of Greece in their semifinal match at the Australian Open tennis c

Canberra, Jan 27 : Australians have been warned to brace for a spike in Covid-19 infections when schools return from the summer holidays. The Premiers and Chief Ministers on Thursday held a Nati […]

Chennai, Jan 27 : If rumours doing the rounds in the industry are to be believed, the Hindi dubbing rights of director Lingusamy's much-awaited action entertainer, 'The Warriorr', starring Ram Pothien […]

Yediyurappa's granddaughter left her 9-month-old baby in other room, before ending life