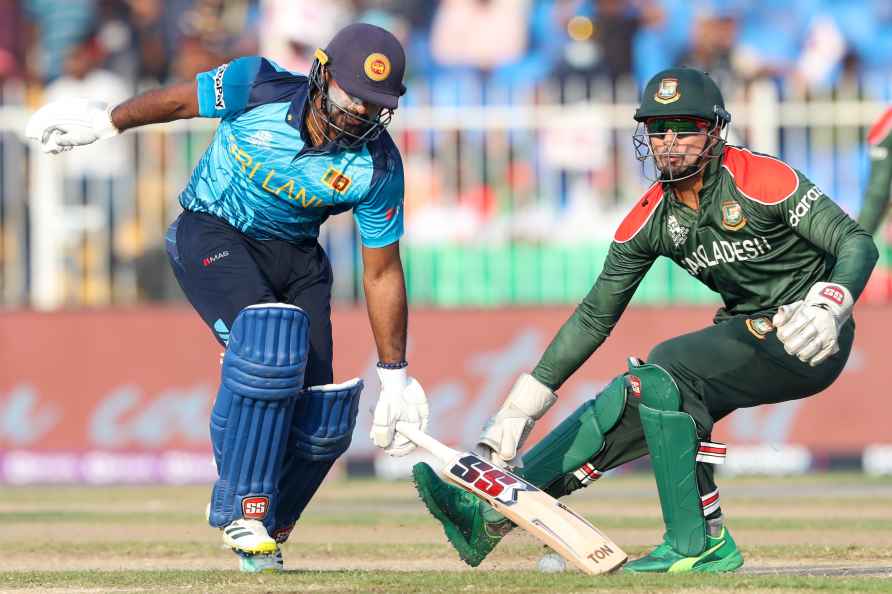 [Sharjah: Sri Lanka's Kusal Perera, left, runs to make his ground as Bangladesh's Nurul Hasan reaches for the ball during the Cricket Twenty20 World Cup match between Sri Lanka and Bangladesh in Sharjah, UAE, Sunday, Oct. 24, 2021. /PTI] Sharjah, Oct 24 : Attacking fifties by Charith Asalanka (80 off 49) and Bhanuka Rajapaksa (53 off 31) helped Sri Lanka hammer Bangladesh by five wickets in a Group 1 match in the Super 12 stage of the ICC Men's T20 World Cup at the Sharjah Cricket Stadium, here on Sunday. Sri Lanka, who came into this match off an unbeaten run in the first round, continued their winning streak in the tournament. Fantastic fifties by Mohammad Naim (62 off 52) and Mushfiqur Rahim (57 off 37) powered Bangladesh to 171/4 in 20 overs. Chasing a stiff target, Sri Lanka lost the wicket of Kusal Perera (1) in the very first over. But, Charith Asalanka, who came out to bat after Parera's wicket, took on Bangladesh's spinners early. Pathum Nissanka then smashed Mahedi Hasan for 16 in an over and took Sri Lanka to 54/1 after six overs. Just when Sri Lanka were dominating the chase, Shakib returned for his second over to take two wickets, conceding just one run in the ninth over. He had Nissanka bowled, before sending back Avishka Fernando for a duck with a straighter one. Wanindu Hasaranga then couldn't get on top of a slower ball from Mohammad Saifuddin, offering a high catch to Naim. From there on, birthday boy Rajapaksa joined Asalanka in the middle to steady the innings. The two left-handers put together a match-defining stand of 86 off just 52 balls. Rajapaksa quickly settled Sri Lankan nerves with an inside-out six over extra cover while Asalanka danced down the track to Mahmudullah before slog sweeping the off-spinner to collect two sixes in the 14th over. Rajapaksa then took 22 off Saifuddin in the 16th over, to comprehensively turn the game Sri Lanka's way. He couldn't stay till the end, bowled by Nasum while going for the cut shot, but with just seven needed off 10 balls by then, the bulk of the work had been done. Asakanka fittingly hit the winning runs behind square as Sri Lanka chased down the target in 18.5 overs with five wickets in hand. This was Sri Lanka's highest successful run chase at the T20 World Cup. Earlier, batting first, openers Mohammad Naim and Liton Das gave Bangladesh a good start. The duo rotated strikes regularly and hit occasional boundaries, taking Bangladesh to 38/0 in 5 overs. In the last over of the powerplay, Lahiru Kumara gave Sri Lanka their first breakthrough, dismissing Das for 16. Das stepped out and tried to loft the ball over cover but didn't get the elevation as the fielder jumped in time to catch it. The experienced Shakib Al Hasan then joined Naim in the middle. Shakib began beautifully and hit two quick boundaries but he couldn't carry his innings any longer and got out to a peach of a delivery bowled by Chamika Karunaratne. From there on, Mushfiqur Rahim and Naim took the responsibility on their shoulders. They took their time before taking Sri Lanka bowlers to the cleaners. Rahim, in particular, was very aggressive in his intent and used the angles of the ground very well to hit sixes -- one against Hasaranga over deep mid-wicket and the other off a slower delivery from Fernando over deep square leg. Naim, on the other hand, complimented his batting partner well and brought his 4th T20I half-century off 44 balls. Binura Fernando, who bowled the 17th over, finally broke the dangerous partnership of 73 runs between Naim and Rahim. Naim, the opener, tried to pull but top-edged the ball to get out, leaving Bangladesh at 129-3 after 16.1 overs. Even after Naim's wicket, Mushfiqur didn't stop and continued dealing in boundaries, scoring his fifty off just 32 balls. In between, Bangladesh lost the wicket of Afif Hossain (7) via a run-out. But, with Rahim and captain Mahmudullah at the crease, Bangladesh were set for a big finish. The duo hit a few glorious boundaries in the last few overs and powered Bangladesh to 171-4 after 20 overs. Brief scores: Bangladesh 171-4 in 20 overs (Mohammad Naim 62, Mushfiqur Rahim 57; Chamika Karunaratne 1/12) lost to Sri Lanka 172-5 in 18.5 overs (Charith Asalanka 80, Bhanuka Rajapaksa 53; Shakib Al Hasan 2/17) /IANS

Cold wave grips Greece, snowfall disrupts traffic
[Athens: A couple walks past a fallen tree on a parked vehicle, in Athens, after a snowstorm on Tuesday, Jan. 25, 2022. A snowstorm of rare severity d

S.Korea's population mobility falls by most in 9 yrs

Seoul, Jan 25 : The number of South Koreans who moved to different residences in the country declined by the most in nine years last year amid fewer housing transactions, data showed on Tuesday. […]

Beijing, Jan 25 : China-based display maker BOE will reportedly supply Apple with OLED LTPO displays for the higher-end models of the iPhone 15 lineup in 2023. According to The Elec, the Chinese […]

Battle for UP: 2 SP candidates to contest from jail

I suppose in an autocratic system like BJP's, there can only be one supreme leader: Priyanka Gandhi on Yogi Adityanath fielded from Gorakhpur.

I suppose in an autocratic system like BJP's, there can only be one supreme leader: Priyanka Gandhi on Yogi Adityanath fielded from Gorakhpur. […]