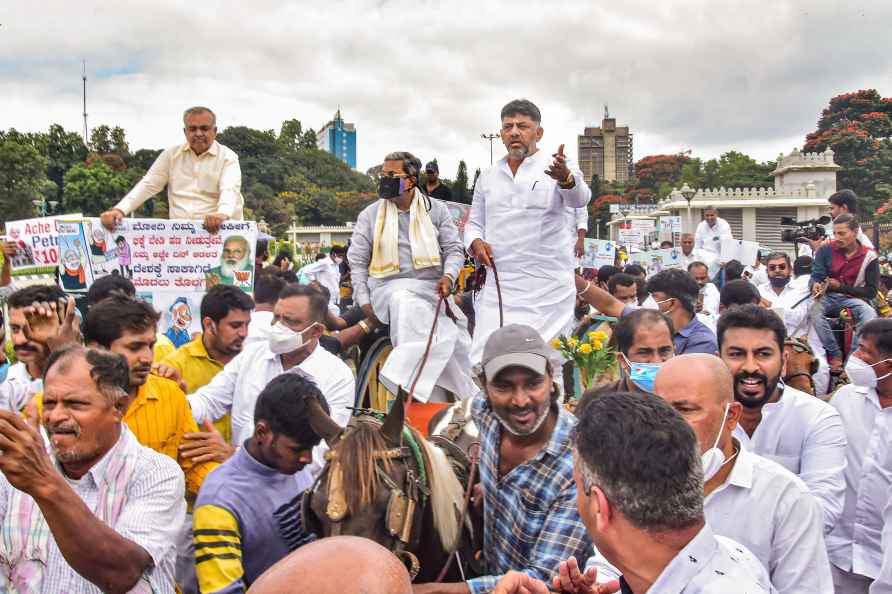 [Bengaluru: Opposition leader in the Karnataka Assembly Siddaramaiah and KPCC President D K Shivakumar ride on a bullock cart to reach Vidhanasoudha for the assembly session, in Bengaluru, Friday, Sept. 24, 2021. ( /PTI] Bengaluru, Sep 24 : Continuing with the protest against the fuel and daily commodities' price hike, the Karnataka Congress on Friday staged a 'tonga' protest in Bengaluru. The Congress leaders of both the Houses of the Legislative Assembly and Legislative Council, reached the Vidhana Soudha on tongas. (A tonga or tanga is a light carriage or curricle drawn by one horse used for transportation in the Indian subcontinent). Karnataka Congress President D.K. Shivakumar, Leader of the Opposition Siddaramaiah, leader of the Opposition in Legislative Council S.R. Patil led the protest on tongas with their supporters. Shivakumar and Siddaramaiah, though belonging to rival camps, sat on the same tonga and led the protest together. The tonga protest rally started from the Congress party office on the Queen's Road. The protest was organised to draw the attention of the state as well as the Central government on the fuel price hike. The Congress in Karnataka had organised a bullock cart protest rally on the first day of the Assembly session followed by the bicycle protest rally to highlight the plight of the common man in the backdrop of the price hike of fuel and daily commodities. Siddaramaiah described the price rise as 'criminal loot' quoting former Prime Minister Atal Bihari Vajpayee. Chief Minister Basavaraj Bommai had replied with statistics and said the inflation rate was more under the Congress and UPA governments' rule. He retaliated with the phrase 'Congress loot'. Shivakumar charged that the government was so thick-skinned that even after being called a 'pickpocket' government, it is not even responding. /IANS

[Bengaluru: Opposition leader in the Karnataka Assembly Siddaramaiah and KPCC President D K Shivakumar ride on a bullock cart to reach Vidhanasoudha for the assembly session, in Bengaluru, Friday, Sep […]

Rupee slips 4 paise to close at 73.68 (provisional) against US dollar.