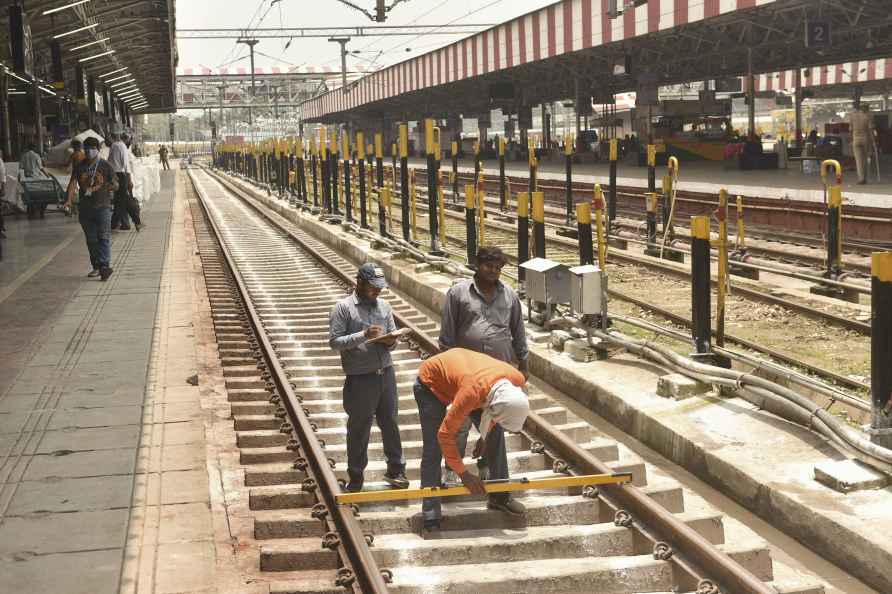 Ayodhya, Aug 27 : Ayodhya has been turned into a fortress ahead of the President Ram Nath Kovind's visit to the holy city on Sunday. He will travel to Ayodhya in a special presidential train from Lucknow. Security forces have been deployed and the credentials of those residing near the railway tracks are being checked. Encroachment along the route are also being removed. The entire railway route is being sanitised and people have been asked to remain indoors on the day of the President's visit. Meanwhile, the railway station is also being given a quick makeover and platform no. 1, where the presidential train will arrive, was freshly painted. Similarly, floral decoration is also being done to welcome the President. To accommodate other dignitaries, including the Chief Minister and the Governor, a VIP guest room has been set up on the platform, with new furniture and other facilities. At least a dozen trains on the Ayodhya route will be diverted to ensure security. Security personnel will be deployed along the Lucknow-Ayodhya railway route. The President is scheduled to inaugurate the Ramayana conclave and other projects after offering prayers at the Ram Janmabhoomi temple. Over 250 artists will perform at cultural programmes at eight different sites during the visit. Incidentally, this is first time that a President is visiting Ayodhya. /IANS

Mumbai, Dec 7 : Actor Rohit Purohit has been roped in to play the character of Dr Vikrant Saxena in the new show 'Dhadkan Zindagii Kii'. He talks about his character, the show, how donning the […]

Vienna, Dec 7 : The federal government of Austria was reshuffled and Karl Nehammer has been sworn in as the country's new Chancellor. Nehammer, 49, was General Secretary of the ruling conservati […]

New Delhi, Dec 7 : In a bid to empower gamers, PC maker HP on Tuesday added a new notebook -- HP OMEN 16 -- to its gaming PC portfolio in India. The gaming notebook is available for purchase at […]