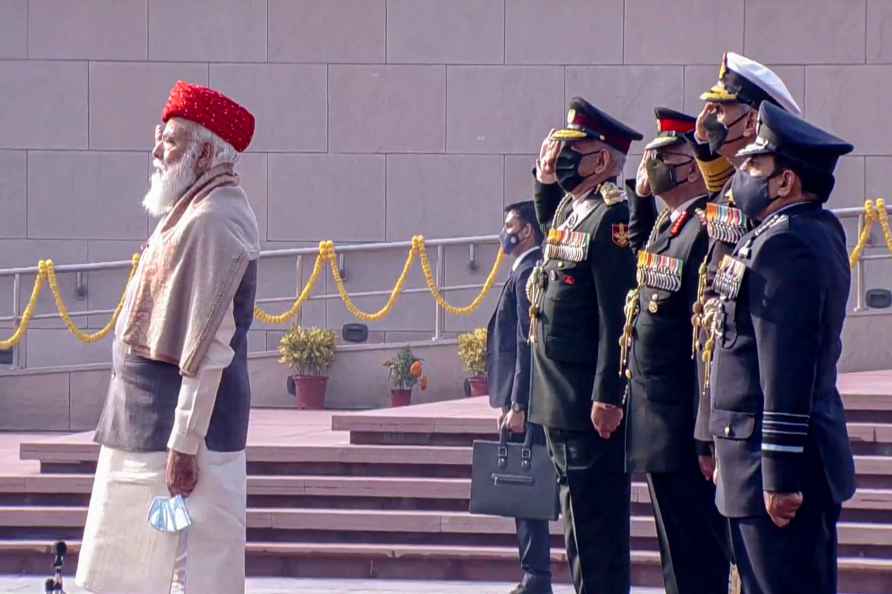 New Delhi, April 8 : Continuing with the excellent tradition of strong bilateral and defence ties between India and Bangladesh, Indian Army Chief General M.M. Naravane is on a five-day visit to Bangladesh. He left for Bangladesh on Thursday morning. General Naravane's visit comes in the midst of Swarnim Vijay Varsh celebrations which mark 50 years of the liberation of Bangladesh, made possible by the historic leadership of the Bongobondhu Sheikh Mujibur Rahman and heroics of the Mukti Bahini who fought shoulder to shoulder with the Indian Armed Forces. The Army Chief will pay tributes to the martyrs of the Liberation War by laying a wreath at the Shikha Anirban on Thursday. This will be followed by one to one meetings with the three Service Chiefs of the Bangladesh's Armed Forces. General Naravane will also visit the Father of the Nation Bangabandhu Sheikh Mujibur Rahman Memorial Museum in Dhanmondi, where he will pay tributes to Bangladesh's founding father. He will interact with Bangladesh's Minister of Foreign Affairs on April 11 at Bangladesh Army's Multipurpose Complex in Dhaka where he will attend a seminar on UN Peace Support Operations and deliver a keynote address on 'Changing Nature of Global Conflicts: Role of UN Peacekeepers'. General M.M. Naravane is also scheduled to interact with the Force Commanders of the United Nations Missions in Mali, South Sudan and Central African Republic and the Deputy Chief Operations Officer of the Royal Bhutanese Army on April 12. He will also attend the closing ceremony of Exercise Shantir Ogrosena, a multilateral UN-mandated counter terrorism exercise comprising the Armed Forces of India, Bangladesh, Bhutan and Sri Lanka along with observers from the US, the UK, Turkey and the Kingdom of Saudi Arabia among others. He will also witness the innovations of the Bangladeshi Armed Forces personnel during the Hardware Display. The Chief of the Army Staff will interact with the members of Bangladesh Institute of Peace Support and Training Operations (BIPSOT) during the last leg of his visit. This visit will further deepen the bilateral relationships between the two Armies and act as a catalyst for closer coordination and cooperation between the two countries on a host of strategic issues. /IANS

[**EDS: SCREENSHOT FROM A LIVE VIDEO STREAM** New Delhi: Prime Minister Narendra Modi holds a meeting with chief ministers of all states over the rising cases and current status of Covid-19, New Delhi […]

New Delhi, April 8 : Continuing with the excellent tradition of strong bilateral and defence ties between India and Bangladesh, Indian Army Chief General M.M. Naravane is on a five-day visit to Bangla […]