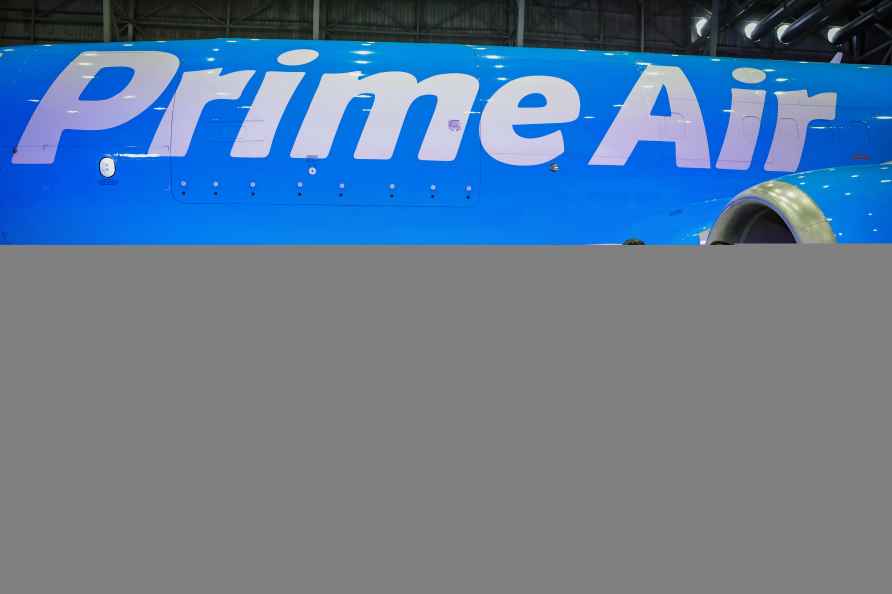 [Hyderabad: Telangana Minister for Municipal Administration KT Rama Rao with Amazon, Vice President, Customer Fulfilment Operations, Akhil Saxena, Vice President, Amazon Global Air, Sarah Rhoads and others at the induction ceremony of Quikjet?s new Amazon-branded aircraft, in Hyderabad, Monday, Jan. 23, 2023. ( /PTI] Hyderabad, Jan 23 : E-commerce giant Amazon on Monday launched Amazon Air in India to enhance its transportation network and enable faster deliveries to customers in the country. Amazon will utilize the complete cargo capacity of a Boeing 737-800 aircraft that will be operated by Quikjet Cargo Airlines Private Limited. Telangana's minister for industries and commerce K. T. Rama Rao was present at the induction ceremony of Quikjet's new Amazon-branded aircraft along with Amazon's senior leadership, including Akhil Saxena - Vice President, Customer Fulfilment (APAC, MENA & LATAM) and WW Customer Service, and Sarah Rhoads, Vice President, Amazon Global Air in Hyderabad. Amazon is the first e-commerce company in India to partner with a third-party air carrier to provide a dedicated air cargo network. The company said that this reaffirms its long-term commitment to strengthen its transportation infrastructure in India. Quikjet will use the aircraft to transport Amazon customer shipments to cities such as Hyderabad, Bangalore, Delhi, and Mumbai. The launch of Amazon Air in India reinforces the company's commitment to continue building capacity to meet the needs of its customers and to grow its transportation network for faster deliveries. Minister Rama Rao noted that Amazon is the first e-commerce company in India to launch the dedicated air cargo network. It chose triumphant Telangana to launch Amazon Air outside North America and Europe. The minister stated that Amazon's love story with Hyderabad continued to grow. He pointed out that Hyderabad is already home to Amazon's world's largest campus and AWS Data Centre has already announced investment of 4.4 billion dollars by 2030. Amazon's largest fulfillment centre in Asia is also located in Hyderabad. Rama Rao said that Telangana offers a conducive environment for the development of multi-modal connectivity and that Hyderabad has emerged as a major hub for e-commerce distribution and supply chain activities. "We have been working towards strengthening the state's air cargo infrastructure, and we welcome the launch of Amazon Air which will further assist in making Hyderabad a cargo hub for the country and will create additional employment opportunities in the state," he said. The minister stated that Telangana and Hyderabad remained shining beacons in terms of attracting investment. During the last eight year, the state attracted 47 billion dollars in investment. This excludes 2.6 billion dollars committed by the World Economic Forum in Davos last week. "Amazon Air comes to India at an important time. Over the last few years, we have taken many positive steps to build our fulfilment, transportation and logistics infrastructure in the country. Our investment in Amazon Air will only further improve the delivery experience for our customers in India. Moreover, the launch will support over 1.1 million sellers in India, enabling growth for ancillary businesses such as transportation and aviation," said Akhil Saxena. Amazon Air was launched in 2016 in the U.S. and operates an air cargo network that has grown to include more than 110 aircraft and more than 70 destinations worldwide. /IANS

Hyderabad, Jan 23 : AIMIM president Asaduddin Owaisi has demanded a ban on the upcoming movie on Mahatma Gandhi's assassin Nathuram Godse. The Hyderabad MP asked the Union government if it will […]

Indore: Indian captain Rohit Sharma with teammates during a practice session ahead of the ODI cricket match against New Zealand, in Indore, Monday, Jan. 23, 2023. ( /PTI […]

Canberra, Jan 23 : Online bullying among Australian children has reached a concerning level, the nation's eSafety commissioner warned on Monday. The office of the commissioner said it has probed […]