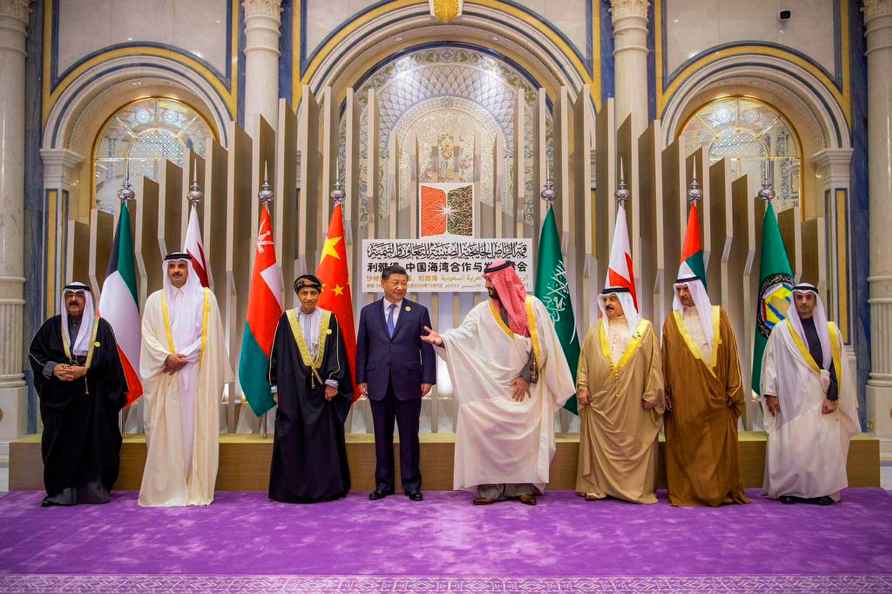 [In this photo made available by Saudi Press Agency, SPA, With the presence of Arab Gulf Leaders, Saudi Crown Prince and Prime Minister Mohammed bin Salman, forth right, greets Chinese President Xi Jinping, after the group photo, during the Gulf Cooperation Council (GCC) Summit, in Riyadh, Saudi Arabia, Friday, Dec. 9, 2022. Gulf Arab leaders and others in the Mideast met Friday in Saudi Arabia as part of a state visit by Chinese leader Xi Jinping, seeking to firm up their relations with Beijing as decades of U.S. attention on the region wanes. /PTI] By Sanjeev Sharma New Delhi, Dec 9 : More than 50 Uyghur groups have urged heads of states and leaders of international organisations meeting with Chinese President Xi Jinping this week in Saudi Arabia to condemn China's atrocity crimes against the Uyghurs and end the genocide in its far-western Xinjiang region, a media outlet reported. Xi, who is paying a three-day state visit to Saudi Arabia, signed a comprehensive strategic partnership agreement with King Salman bin Abdulaziz Al Saud, agreeing to hold a meeting between the two heads of state by turns every two years. During the start of the visit, Chinese and Saudi companies signed more than 30 investment agreements, RFA reported. Xi will also attend summits with Arab countries and the Gulf states, including the first China-Arab States Summit. Xi last visited the Middle Eastern country in 2016. "On various occasions, Uyghur organizations have expressed their great disappointment over the silence of Muslim-majority countries on the Uyghur genocide, which has involved the arbitrary detainment of millions of Uyghurs in concentration camps, where they are forced to renounce their religious beliefs and practices," a statement issued by the groups was quoted by RFA as saying. The statement went on to say that authorities have destroyed or damaged thousands of mosques and cemeteries in Xinjiang, which Uyghurs call East Turkistan, while banning religious practices such as giving Islamic names to children, fasting during the holy month of Ramadan, and forcing Muslims to eat pork and drink alcohol. In October, many Muslim-majority countries voted against or abstained on a United Nations resolution that sought to raise debate at the Human Rights Council over a report by the former U.N. human rights chief on rights violations in Xinjiang. "The failure of these countries to allow a space for debate at the Human Rights Council, a body which was created to do exactly that, contradicts the core values and principles of Islam," the statement said. Saudi Arabia is the site of Islam's two holiest places, Mecca and Medina, and the Saudi royal family has responsibility for their guardianship and facilitating religious pilgrimages there. Dolkun Isa, president of the Munich, Germany-based World Uyghur Congress, or WUC, said China is not only committing genocide against the Uyghur Muslims, but also has declared war on Islam. "It is completely unacceptable that the leaders of the Muslim world will sit with China's dictator on the same stage and just talk about business and cooperation by turning a blind eye to China's attack on Islam," he told the media outlet. Gheyyur Qurban, office director of WUC's Berlin office said countries like Saudi Arabia and Iran not only have remained silent on the Uyghur genocide, but also have supported the Chinese government's position, even at the UN at the expense of their fellow Uyghur Muslims. "It is extremely disappointing to see Saudi leaders who claim to be the Protector of the Two Holy Cities receive Xi Jinping, the main culprit of Uyghur genocide, with pompous ceremonies and allow him to hold summits with Mideast leaders to expand China's infiltration and influence in the heart of Islamic world," he told the media outlet. China is Saudi Arabia's top trading partner, and the kingdom serves as a vital source of crude oil for China. WUC, one of the signatories of the statement, also called on Saudi authorities not to repatriate four Uyghurs detained there back to China, saying their extradition would violate the international principle of non-refoulement. The practice forbids a country receiving refugees or asylum seekers from returning them to a nation where they would likely face persecution. Saudi police arrested two Uyghur men originally from Xinjiang in November 2020 while they were in the country for religious reasons. The arrest was allegedly carried out after the Chinese Embassy in Saudi Arabia requested their extradition. Saudi authorities also arrested Abula Buheliqiemu and her teenage daughter near Mecca this March. Authorities told all four that they faced deportation to China, RFA reported. (Sanjeev Sharma can be reached at sanjeev.s@ians.in) /IANS

ISL 2022-23: Hernan Santana joins FC Goa for the remainder of the season
[Jamshedpur: Jamshedpur FC players and Mumbai City FC players (in blue) vie for the ball during their Indian Super League 2022-23 match, at the JRD Ta