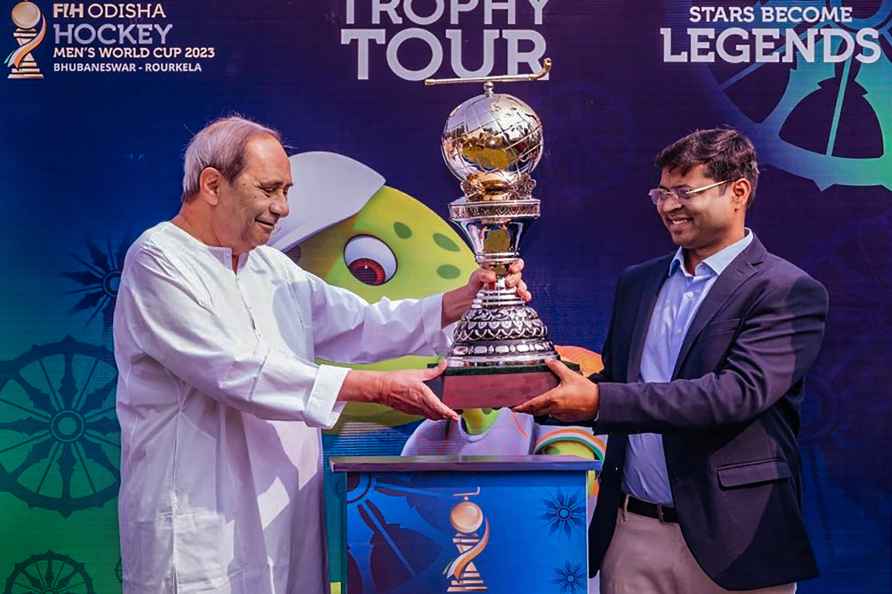 [**EDS: IMAGE VIA CMO (ODISHA)** Bhubaneswar: Odisha Chief Minister Naveen Patnaik launches the trophy tour of FIH Odisha Hockey Men?s World Cup 2023 by handing over the trophy to Hockey India President Dilip Tirkey, in Bhubaneswar, Monday, Dec. 5, 2022. ( /PTI] Bhubaneswar, Dec 5 : Odisha Chief Minister Naveen Patnaik on Monday launched the trophy tour of the FIH Odisha Hockey Men's World Cup 2023 in Bhubaneswar with handing over the trophy to Hockey India President Dilip Tirkey. Wishing the trophy tour a grand success, Chief Minister Patnaik said, "I hope the Hockey Men's World Cup Trophy Tour will build excitement for the World Cup across India. We will be hosting 16 teams and the matches will be played in Bhubaneswar and Rourkela." He said it will be a memorable World Cup for the teams and the fans. Odisha sports and youth services minister Tusharkanti Behera, secretary general Hockey India Bholanath Singh, state sports secretary R. Vineel Krishna, executive director of Hockey India Srivastava and officials and hockey players were present on this occasion. The trophy will travel across 13 states and one union territory before returning to Odisha on December 25, thus giving the fans and public a chance to engage with the prestigious trophy before the winning team lifts it. In the next 21-days, the trophy will journey across West Bengal, Manipur, Assam, Jharkhand, Uttar Pradesh, Punjab, Haryana, New Delhi, Madhya Pradesh, Maharashtra, Tamil Nadu, Kerala, Karnataka and Chattisgarh. Once back in Odisha, the Hockey Men's World Cup Trophy will tour across all the districts. The trophy will also visit 17 blocks of Sundergarh district which is famed for being the cradle of Hockey, officials said. The last leg of the tour will be in Rourkela before finally returning to Kalinga Stadium in Bhubaneswar where the finals will be played on January 29, 2023, they said. /IANS

ISL 2022-23: Hernan Santana joins FC Goa for the remainder of the season
[Jamshedpur: Jamshedpur FC players and Mumbai City FC players (in blue) vie for the ball during their Indian Super League 2022-23 match, at the JRD Ta

New Delhi, Jan 28 : A 43-year-old man was found dead under mysterious circumstances in West Delhi area, said an official on Saturday. The deceased has been identified as Rajkumar Galan, a reside […]

New Delhi, Jan 28 : A man on a two-wheeler who was critically injured after colliding with a car in north Delhi's Kanhaiya Nagar died during the course of treatment on Saturday. In an incident e […]