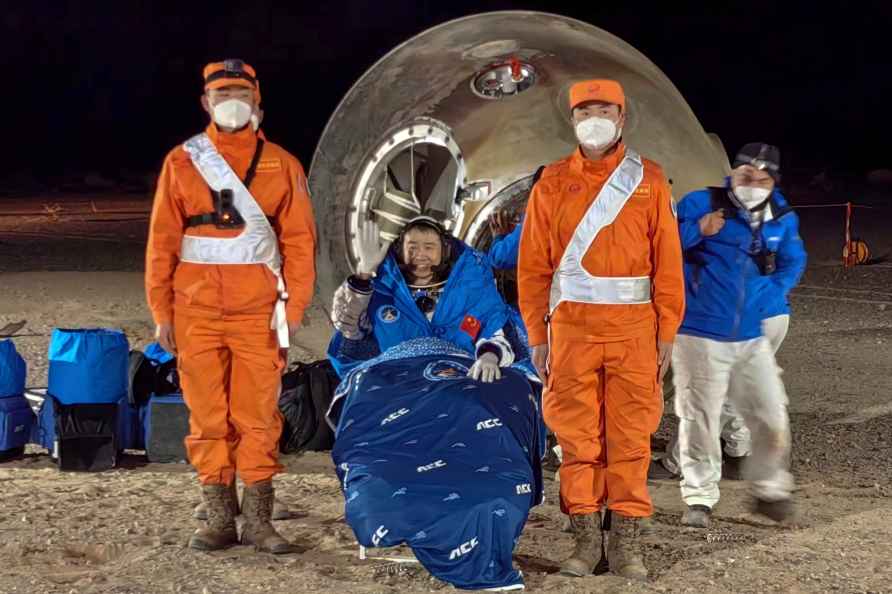 [In this photo released by Xinhua News Agency, astronaut Chen Dong waves as he sits outside the re-entry capsule of the Shenzhou-14 manned space mission after it lands successfully at the Dongfeng landing site in northern China's Inner Mongolia Autonomous Region, Sunday, Dec. 4, 2022. Three Chinese astronauts landed in a northern desert on Sunday after six months working to complete construction of the Tiangong station, a symbol of the country's ambitious space program, state TV reported. /PTI] Hyderabad, Dec 4 : Telangana Chief Minister K. Chandrasekhar Rao on Sunday slammed Prime Minister Narendra Modi for threatening to topple his government and wondered if pulling down the governments of those who question him is his policy. "When we questioned the Centre, the Prime Minister himself said KCR we will topple your government. What does this mean? Have we not got elected like you? Why do you want to topple?" asked the chief minister. The Telangana Rashtra Samithi (TRS) president was addressing a public meeting in Mahabubnagar district on Sunday. He also recalled that PM Modi had claimed that 40 MLAs of Bengal Chief Minister Mamata Banerjee's party are in touch with him. "Can a Prime Minister speak like this? Is buying MLAs a democratic policy? When some thieves came to Hyderabad to lure the TRS MLAs, create instability and topple our government, we caught and put them in jail," said KCR while referring to recent arrest of three alleged agents of BJP while trying to lure four MLAs of TRS with offers of huge sum of money to make them defect to BJP. KCR lashed out at the Centre for what he called creating hurdles in the path of development of Telangana by not releasing the funds. "The inefficient central government neither works nor allows others to work," he said. He urged the people to have discussions in their respective villages on what is happening in the country today. He said the people, especially youth should know what is happening as they may have to pay a heavy price for their indifference. Assuring people that he will continue to stand by them, he appealed to them to stand by him. KCR said BJP was dividing people by instigating them for narrow political gains, creating problems for good leaders working for people by spreading lies and resorting to attacks. He said there should be a revolt somewhere to check this dangerous trend. He reiterated that TRS as Bharat Rashtra Samithi (BRS) will work to influence the national politics. Referring to the progress achieved by Telangana during last eight years, he claimed that the state suffered a loss of Rs 3 lakh crore due to PM Modi government's wrong policies. "Telangana in this short span of time increased its GSDP manifold and if the Centre had also performed at par with Telangana, the GSDP would have been higher by another Rs 3 lakh crore," he said. He alleged that the Centre is creating hurdles for democratically elected state government. He said even after eight years, the Modi government has not decided the share of Telangana in Krishna river water. KCR also reminded Modi of his promise made in 2014 to complete Palamuru-Rangareddy lift irrigation project. He said despite the Centre not extending its cooperation, the state government was determined to complete the project which will irrigate 25-30 lakh acres. The chief minister, who earlier inaugurated integrated district collector office, listed out Telangana's achievements in eight years. He said the state not only overcame electricity shortage but has become a role model for the entire country with round-the-clock supply to farmers and the highest per capita power consumption in the country. KCR said he also fulfilled the promise of providing drinking water to every house by completing Mission Bhagiratha. He claimed that no state can compete with Telangana in terms of welfare schemes. He said no other state has schemes like Rythu Bandhu and Rythu Bhima. The chief minister also spoke about the transformation Mahabubnagar district has witnessed in the last eight years. He recalled that the district was once known for droughts, starvation and migration. "The district has now become an industrial hub. An IT centre has come up. A food park is being set up on 300 acres. An urban park has come up on 200 acre. The district will also get Rs 9,500 crore investment with the setting up of a battery factory," he said. /IANS

Baghdad, Jan 27 : An Iraqi court has sentenced 14 terrorists to death over the mass killings of about 1,700 soldiers when the Islamic State (IS) had seized Tikrit, the capital of Salahudin province, i […]

San Francisco, Jan 27 : The authorities in the US have seized the assets of the major ransomware group Hive, which has extorted thousands of victims for over $100 million in extortion payments after l […]