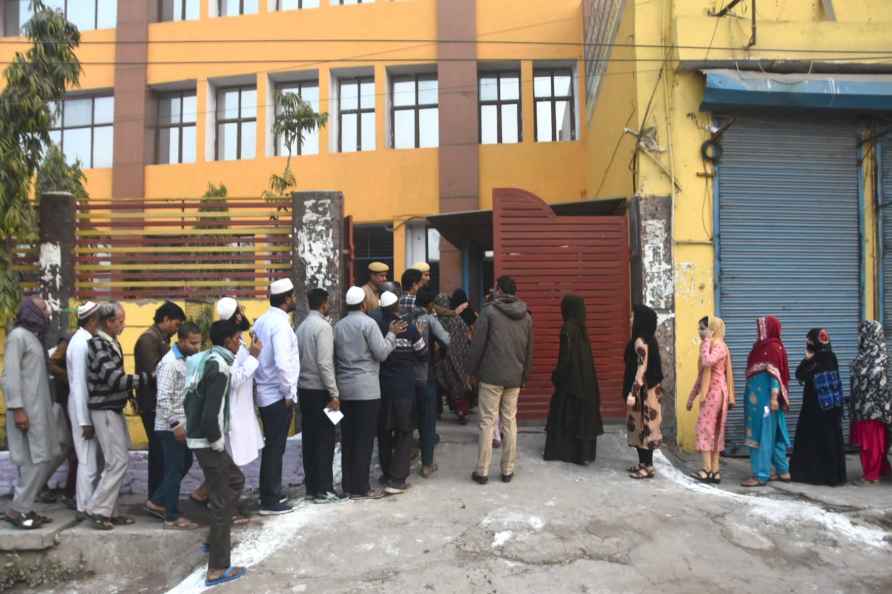 [New Delhi: Voters wait in a queue to cast their votes for the Municipal Corporation of Delhi (MCD) elections 2022, at Chand Bagh area in East Delhi, Sunday, Dec. 4, 2022. ( /PTI] New Delhi, Dec 4 : Voting for the Municipal Corporation of Delhi (MCD) election was underway on Sunday. While the Aam Aadmi Party is looking to gain greater control over the national capital with the civic body polls, the BJP has put in all efforts to continue its reign. Voting started at 8 a.m. and as per the state election commission, polling station gates will be shut at 5.30 p.m., after which only those already inside can vote. Earlier, Delhi Metro had announced that Metro rail services will begin at 4 a.m., two hours earlier than usual, on voting day. Around 1.4 crore eligible voters from 250 wards will get a chance to cast their votes in the crucial local body polls. The counting of the votes will be done on December 7. All the poll officials and security forces are prepared for the elections in the national capital. Delhi State Election Commission has set up 13,638 polling stations for the civic body polls. Around 40,000 police personnel, 20,000 home guards as well as 108 companies of paramilitary and state armed police forces has been deployed to ensure smooth conduct of the MCD election. Over 1,300 candidates from different political parties are in the contest for the Civic body polls in Delhi. The AAP and BJP are fighting on all seats. The Congress has fielded candidates on 247 seats as nominations of three of its candidates were rejected over technical issues. Moreover, all the major political parties including the BJP, Congress and AAP have fielded more women candidates than men this year in the MCD polls. The ADR report said that 693 (52 per cent) female candidates are contesting in the MCD election 2022. In 2017 MCD Elections, 1127 (49 per cent) out of 2315 candidates analysed were women. Analysis showed that a total 136 out of 249 BJP candidates are women. Similarly, the AAP has fielded 136 woman candidates and the Congress has fielded 132 female candidates. The BJP has been ruling over the municipal bodies of Delhi for the last 15 years. The saffron party in the last MCD election in 2017, got a massive two-thirds majority. This will be the first civic body polls in Delhi after the delimitation of wards. The Centre had sent the final delimitation order in October this year. Earlier, there were a total of 272 wards comprising the North Delhi Municipal Corporation, South Delhi Municipal Corporation and East Delhi Municipal Corporation. /IANS

Nine killed in California shooting
[Police vehicles block the street near a scene where a shooting took place in Monterey Park, Calif., Sunday, Jan. 22, 2023. Nine people were killed in

Mumbai, Jan 22 : 'Imlie' actress Megha Chakraborty, who is seen playing the titular role in the show is enjoying shooting for the fictional drama and keeps sharing reels and pictures from the sets. […]

Thiruvananthapuram, Jan 22 : The rogue wild elephant, Palakkad Tusker 7 or PT7, which has been creating havoc in the Dhoni area of the district, was tranquilized during the early morning hours on Sund […]

Shekhar Kapur's tribute to Heath Ledger: 'He was a very spiritual person'

Los Angeles, Jan 22 : Filmmaker Shekhar Kapur, who directed late Hollywood star Heath Ledger in the 2002 epic 'The Four Feathers', has paid fulsome tribute to the late actor as the 15th anniversary of […]