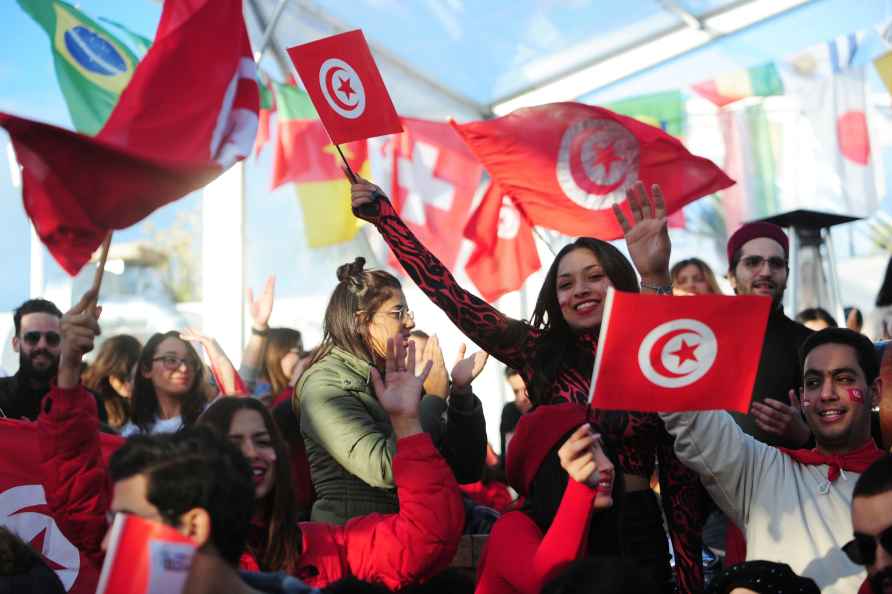 [Tunisia soccer fans gather to watch their national team play against France in a World Cup Group D soccer match played in Qatar, on a large screen set up for fans in Tunis, Tunisia, Wednesday, Nov. 30, 2022. /PTI] Canberra, Nov 30 : Australia head coach Graham Arnold has declared his side will not play for a draw in their crucial upcoming FIFA World Cup match. The Socceroos play Denmark on later on Wednesday, with a draw enough to send Australia into the round of 16 for the first time since 2006. Speaking to reporters ahead of the game, Arnold said the Socceroos would approach the game with the same intent as in their win against Tunisia, ruling out playing for a stalemate, reports Xinhua. "I have never coached to draw in my life. It's about going out and being on the front foot like we were for 30 minutes against France and for 60 minutes against Tunisia," he said. "Now it's time for 90 percent or 100 percent against Denmark and making sure we remove any sloppy mistakes." The Socceroos beat Tunisia 1-0 on Saturday - Australia's first win at a men's World Cup since 2010 - putting them second in Group D behind France heading into match day three. Arnold said significantly changing tactics or lineups at this stage in the tournament could cause confusion for the key clash. However, right-back Nathaniel Atkinson is expected to return to the starting 11 after recovering from an ankle injury that ruled the 23-year-old out of the Tunisia game. It is the second consecutive men's World Cup where Australia will play Denmark. At the 2018 World Cup in Russia, the two nations played out a thrilling 1-1 draw where the Socceroos held the majority of possession and registered more shots on goal. The second-placed team in Group D will play the winner of Group C - most likely Poland or Argentina - in the round of 16. /IANS

Sabalenka-overcomes-Rybakina-to-win-Australian-Open,-first-Grand-Slam-title
[Aryna Sabalenka of Belarus celebrates after defeating Elena Rybakina of Kazakhstan in the women's singles final at the Australian Open tennis champio

ISL-2022-23:-Hernan-Santana-joins-FC-Goa-for-the-remainder-of-the-season
[Jamshedpur: Jamshedpur FC players and Mumbai City FC players (in blue) vie for the ball during their Indian Super League 2022-23 match, at the JRD Ta

New Delhi, Jan 28 : Five men have been arrested while a juvenile has been apprehended by Delhi Police's Crime Branch for allegedly robbing a pharmaceutical manager after throwing red chilli powder in […]

Mumbai, Jan 28 : Filmmaker Karan Johar shared that his mother and producer Hiroo Johar is a big fan of 'Indian Idol' and praised host Aditya Narayan on the 13th season singing reality show, which will […]