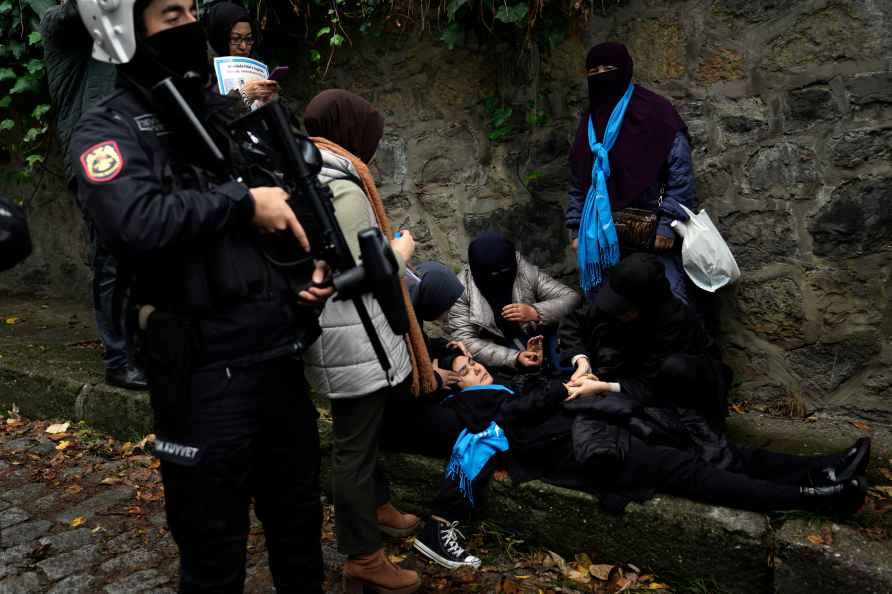 [A Turkish riot police officer stands guard next to protesters helping a woman who fainted during a protest against China's brutal crackdown on ethnic group Uyghurs, in front of the Chinese consulate in Istanbul, Turkey, Wednesday, Nov. 30, 2022. In September the U.N. accused China of serious human rights violations that may amount to ???crimes against humanity??? in a long-delayed report examining a crackdown on Uyghurs and other mostly Muslim ethnic groups. /PTI] Beijing, Nov 30 : China's top security agency has called for a crackdown on "hostile forces" after rare protests against the government strict zero-Covid policy broke out across major cities during the weekend, the media reported. Police officers have flooded now-empty protest sites, with some protesters saying police have contacted them to seek information on their whereabouts, reports the BBC. The ruling Communist Party's Central Political and Legal Affairs Commission, which oversees domestic law enforcement across China, said it was "necessary to crack down on infiltration and sabotage activities by hostile forces in accordance with the law". Police officers were seen on Tuesday patrolling in large numbers in parts of Beijing and Shanghai where demonstrations were held at the weekend. There were also reports of around 150 officers showing up at a busy shopping area in the southern city of Shenzhen after rumours of a planned protest there circulated on social media, the BBC reported. Also on Tuesday, Chinese health officials said the authorities would work to reduce "inconvenience" caused by the Covid pandemic. Mi Feng, spokesperson of China's National Health Commission (NHC), told reporters that lockdowns should be "imposed and eased quickly" and that "excessive control measures should be continuously rectified". China has recorded record numbers of new cases in recent days. It is the only major economy with a zero-Covid policy, with local authorities clamping down on even small outbreaks with mass testing, quarantines and snap lockdowns, BBC reported. Over the weekend, thousands in China took to the streets demanding an end to the strict measures, with some even making rare calls for President Xi Jinping to stand down. Health officials earlier called for more targeted Covid measures, saying complaints over tough curbs were a result of the "arbitrary" local roll-outs, rather than national guidelines. In Guangdong province, authorities announced changes to local Covid policy on Tuesday evening, allowing some close contacts of Covid cases to quarantine at home rather than in state facilities. /IANS

New Delhi, Jan 24 : A 17-year-old student was injured after he was stabbed on his head outside a tuition centre in Delhi's Sangam Vihar area, a senior official said on Tuesday. The incident occu […]

New Delhi, Jan 24 : The Customs officials at Chhatrapati Shivaji Maharaj International Airport, Mumbai on Tuesday said that they seized 90,000 US dollars worth Rs 81 lakh from a passenger who was hidi […]

Chennai, Jan 24 : The textile industry of Tamil Nadu has sought export incentives and additional credit support in the budget for 2023-24 of the Union government to be presented in Parliament on Febru […]