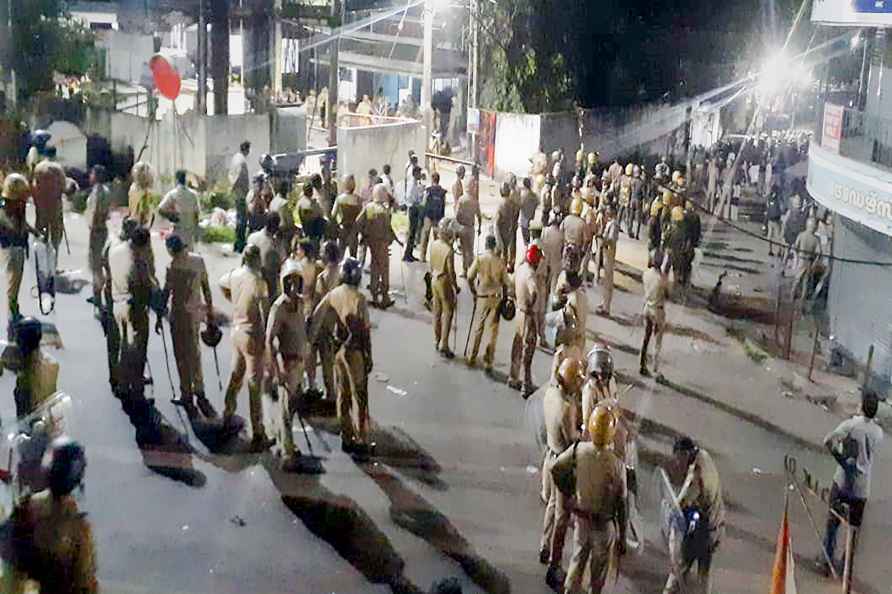 [Thiruvananthapuram: Police personnel deployed to maintain law and order after a mob of agitators attacked Vizhinjam police station following the arrest of one person in connection with violent protests against the construction of Adani port, in Thiruvananthapuram, Sunday, Nov. 27, 2022. ( /PTI] Thiruvananthapuram, Nov 28 : After tension gripped Vizhinjam port area following the fishermen community's protest against the Adani Group restarting work on a $900 million transhipment port, the situation on Monday eased with police releasing four of the five people it took into custody. In protest against the police action on Sunday, the local fishing community led by the Latin Catholic Church went on a rampage and attacked the Vizhinjam police station and injured 35 police officials. In the violence that hit the area, a damage of Rs 85 lakhs has been reported. An FIR against the Archbishop of the Latin Archdiocese of Thiruvananthapuram, Thomas J. Netto, naming him as the first accused had further escalated the tension. Fifty priests, including Auxiliary Bishop, Christudas, and Vicar General, Eugeine Pereria have also been named in the new FIR. Apart from this, the police also registered cases against 3,000 people. Senior priest Eugeine Pereria on Monday told the media that a judicial probe has to be done as some untoward things have now happened. "The protests were going on a peaceful note and suddenly there appears to be some external influences which led to all the acrimony. Priests and women who came to express solidarity with the protesters came under duress. A judicial probe is the need of the hour," said Pereria. Dismissing the allegations, State Ports Minister Ahamed Devarkovil said the protesters give scant respect to the judiciary, which had asked the protesters to maintain calm and not to disrupt the ongoing works. "The state government has been very considerate and in the numerous talks that we have had with them, they came up with seven demands. We are unable to give them an assurance on one demand seeking free supply of kerosene as it comes from the Centre. Another demand is they want the ongoing work in the port to be stopped. That's not possible at all," said the Minister. "The protesters are coming up with new demands every now and then with new demands adding to the confusion," he added. The port project was cleared and work began during the fag end of the Oommen Chandy government in 2011-16. When the Ockhi waves hit the port site in 2017, lot of damage was caused, throwing the work into a limbo. /IANS