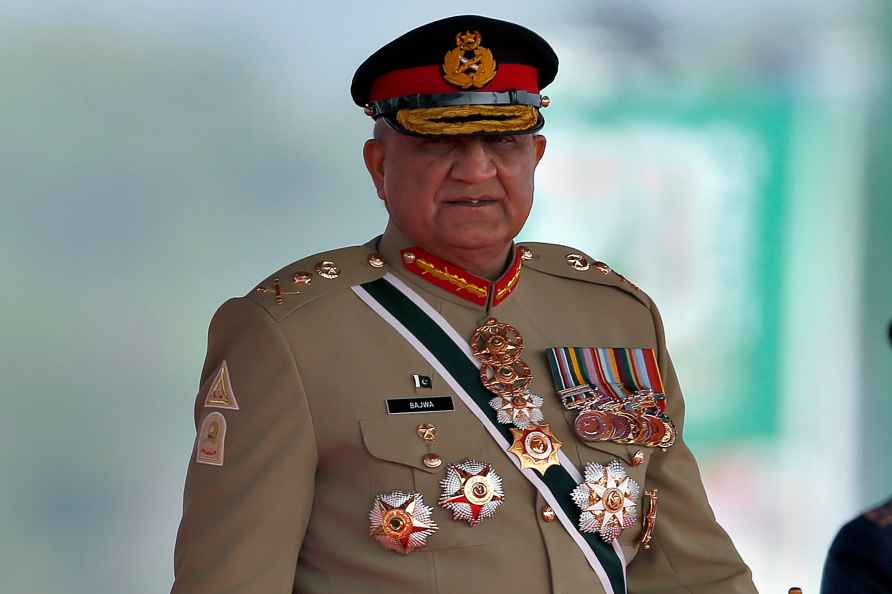 Islamabad, Nov 25 : In light of an inquiry report, two inland revenue officials in Pakistan have been sacked for their involvement in leaking tax data of Chief of Army Staff (COAS) General Qamar Jawed Bajwa and his family, according to a media report. The preliminary inquiry report of the case had been submitted to Pakistan Finance Minister Ishaq Dar, Samaa TV reported. Subsequently, Inland Revenue Commissioner Zahoor Ahmed and Deputy Commissioner Atif Nawaz Waraich have been removed from their posts. The officials are being investigated regarding the matter of data leak under Sections 198 and 216 of Income Tax Ordinance. According to the sources, the tax data was allegedly leaked from credentials of the two named officials, Samaa TV reported. Ishaq Dar on Monday took notice of the case and said that Federal Board of Revenue (FBR) officials who divulged the information had committed serious errors and violated the Official Secrets Act. Subsequently, the Finance Minister directed Tariq Pasha, Special Assistant to the Prime Minister on Revenue, to conduct an investigation into the matter and submit a report. When Qamar Javed Bajwa became a Lieutenant General, his wife was not even a tax filer. His closest friend in Lahore, Sabir 'Mithu' Hameed, was a good businessman but not a billionaire. Everything changed for both families as they moved ahead and become one family, Fact Focus reported in what is being termed as BajwaLeaks. Within six years, both families become billionaires, started an international business, purchased multiple foreign properties, started transferring capital abroad, become owners of commercial plazas, commercial plots, huge farmhouses in Islamabad and Karachi, an immense real estate portfolio in Lahore, and so on. The current market value of the ?? known ?? assets and businesses within Pakistan and outside accumulated by the Bajwa family during the last six years is more than Rs 12.7 billion. /IANS

US-sanctions-Chinese-firm-for-providing-satellite-imagery-of-Ukraine-to-Russia s-Wagner-Group
London, Jan 27 : The US has sanctioned a Chinese company for allegedly providing satellite imagery of Ukraine to support the mercenary Wagner Group's

By Venkatachari Jagannathan Chennai, Jan 28 : Strangely not much of noise is being heard from the Indian insurance sector on hiking the foreign direct investment (FDI) to 100 per cent from the curre […]

Number of our daughters in police and paramilitary forces has doubled in last eight years: Prime Minister Modi at NCC rally.

Number of our daughters in police and paramilitary forces has doubled in last eight years: Prime Minister Modi at NCC rally. […]

By Animesh Singh New Delhi, Jan 28 : As Union Finance Minister Nirmala Sitharaman prepares to present the last full budget of the NDA government before the 2024 Lok Sabha elections, she may try to […]