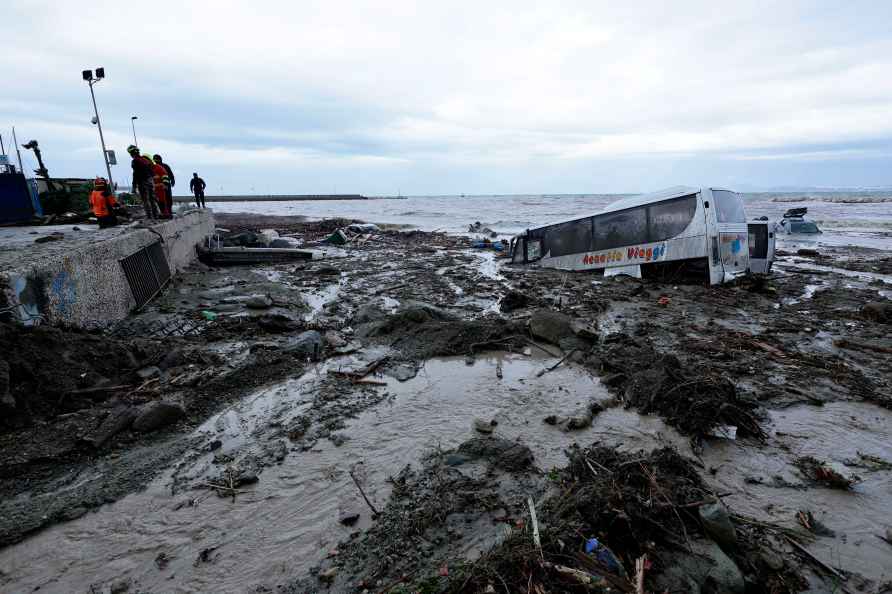 [Ischia: Rescuers stand next to vehicles carried away after heavy rainfall triggered landslides that collapsed buildings and left as many as 12 people missing, in Casamicciola, on the southern Italian island of Ischia, Saturday, Nov. 26, 2022. Firefighters are working on rescue efforts as reinforcements are being sent from nearby Naples, but are encountering difficulties in reaching the island either by motorboat or helicopter due to the weather. /PTI] By Quaid Najmi Mumbai, Nov 26 : It was a cool, hazy evening on November 26, 2008 when I was alone, finishing the day's work in my Andheri west office, seeing off an unscheduled visitor and then locking up the premises to head home. The IANS State Bureau in the country's financial capital was just a year-old then, but it had already made its mark in that brief period, and more was to follow. Driving patiently in the mad-hell traffic, I reached the Western Express Highway at Goregaon when my phone started ringing non-stop, around 9.30 p.m. Muttering irately, I stopped to answer, it was a professional colleague, almost screaming: "There's some shoot-out in Colaba area?? Many police vehicles rushing there?? some localities are cordoned off??" and abruptly cut off. Half-guessing it to be some kind of a mafia gang-war, I nevertheless made some strategic calls to confirm it was more than that?? Just then, the Night Desk chief also called up from the head office in New Delhi, and I assured him that I was bang on the job ?? in the middle of the road - followed by more calls from other seniors?? SmartPhones as the world knows today, were barely smart then, or Social Media, like WhatsApp, was still unborn, so I filed my first brief report on ?? the good ole Mobile Message! I gathered some more dope and sent a second longer 'story' on multiple messages ?? all the while traffic zoomed around me with blaring horns and blinding headlights, many may have wondered what I was doing hooked onto the phone at that hour. After an hour's halt and three proper initial stories filed from the highway, I informed the office that "more after I reach home in Kandivali from my computer" and they reluctantly nodded. A quick shower and meal later, I 'opened' my home office, monitored things over phone, colleagues in the field, live coverage on multiple television channels, and reliable 'sources' in the police and government. Working in 'all shifts', I kept up a steady flow of stories - practically ONE every HOUR - till the carnage ended after some 60 hours, with a prize catch - terrorist Ajmal Amir Kasab, caught alive from Girgaum Chowpatty by that braveheart, Mumbai Policeman Tukaram Ombale, who was martyred. The following day (November 27), I travelled to Churchgate, but the security personnel politely refused permission to go near any of the targeted sites though I managed to sneak around quite close to some of the hot-spots. The locations were the Taj Mahal Palace and Trident hotels, Chowpatty, Chhatrapati Shivaji Maharaj Terminus, Cama Hospital, Leopold Cafe, Chabad House -- all within a 5-sq.km. radius. My coverage included several 'breaking news', descriptive stories of the attacks or unemotional reports about some close professional acquaintances in the security forces getting martyred by the 10 heavily armed Pakistani terrorists - who sprayed bullets on people randomly - hijacked private or police vehicles to wreak bloody mayhem for 60 hours. In between, I was instructed to provide details to several foreign television networks or correspondents or join 'phonos' in studios or shield my ears to impatient senior 'barking' orders demanding 'this point or that angle', and lots more?? all from an overworked lone wolf! Just as those trained terrorists didn't stop to sleep (barring those nine who shut their eyes forever, of course!), during those nerve-wrecking 60 hours, many media-persons near the targeted sites or from other locations, continued their work, just like the valiant security forces -- fatigued but no flags down. I took quick breaks for baths/change/meals, hurrying to and from home or office or quick trips to the action hubs in south Mumbai, as concerned family members hesitantly interjected, advising me to "sleep some time?? for your health" or in the middle of the night, peeping in for "tea-coffee..?" but I shooed them away. In most offices and households, staffers and people were stunned to hear the "real sounds" of bullets shooting from many guns, several automatic weapons firing on both sides, booming of grenades lobbed around, the blazes erupting from multiple locations, clouds of grey-black smoke, armed forces' helicopters hovering near the attack sites, dropping armed security personnel in their respective uniforms??etc. As a housewife, Manali Joshi recalled the horrifying experience - "It all looked and sounded so unreal, unseen even in Hollywood or Bollywood films??" as billions watched the live gory horror unreeling on millions of TV screens globally. Finally, after the nine terrorists were eliminated and Kasab nabbed, the security forces announced the end of the operations - with all sites declared safe and 'secured' ?? as the nation heaved a collective sigh of relief. Around mid-morning of November 29, I informed my top editors that "I need a break now??" and they gave a sympathetic green signal. Zombie-weary, red, swollen toady eyes due to lack of proper sleep, I mechanically drove home that sunny afternoon, grabbed a quick lunch and crashed into bed - to rest in peace for over 24 hours non-stop??! Over the next few days, I learnt this was how scores of other dedicated media-colleagues, the heroic security forces personnel, government officials, ministers, etc, had also similarly worked and rested only after peace returned. (Quaid Najmi can be contacted at: q.najmi@ians.in) /IANS

Mumbai, Nov 27 : Ace Bollywood singer Udit Narayan recalled his first meeting with his wife Deepa Narayan, and his initial days of struggle on 'The Kapil Sharma Show'. He said: "I met Deepa at a […]