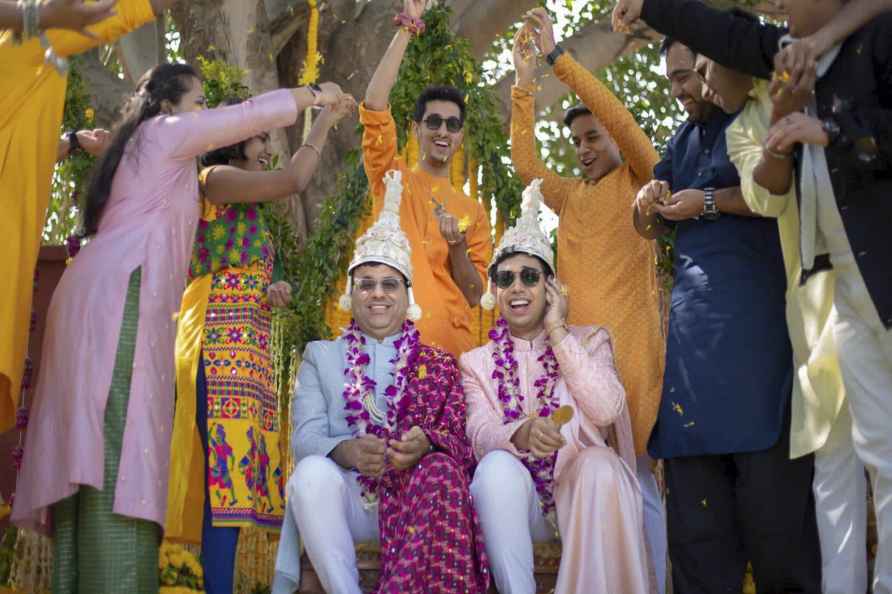 New Delhi, Nov 25 : The Supreme Court on Friday issued notice to the Centre and the Attorney General on two petitions filed by gay couples seeking recognition of same sex marriage under the Special Marriage Act. Senior advocate Neeraj Kishan Kaul, appearing for lead petitioners Supriyo Chakraborty and Abhay Dang, submitted before a bench headed by Chief Justice D.Y. Chandrachud that this is a plea for same sex marriage under Special Marriage Act. The bench, also comprising Justice Hima Kohli, said the high court is already hearing the matter. The counsel submitted that the Centre had informed the Kerala High Court that a transfer plea would be moved before the apex court. Senior advocate Mukul Rohatgi, appearing for other petitioners in the second petition, said this is a sequel to Navtej Johar and Puttuswamy case and this is a living issue not a property issue. Kaul submitted that issue affects basic rights like gratuity, adoption, surrogacy of same-sex couples and also the opening of joint accounts. Chakraborty and Dang have been a couple for almost 10 years and they recently had a commitment ceremony in December 2021, where their relationship was blessed by their parents, family, and friends. After hearing arguments, the top court issued notice returnable in four weeks and also issued notice to the Attorney General. The plea filed by Chakraborty and Dang said, "Despite being a couple for over a decade, calling their parents mummy-papa and maa-baba and going on holidays with them, having bought a home and built a life together, Supriyo and Abhay's relationship is still legally as fragile as it was during the dark days of the pandemic. They do not enjoy any of the rights that married couples do, even though this Hon'ble Court has time and again declared that all adults have the right to marry a person of their choice". Citing judgments, the plea said the apex court has held that Article 21 guarantees that an adult person has the right to marry a person their choice. "The autonomy of individuals to enter into the relationship of marriage and family are crucial facets the freedom of conscience and right to privacy. This Hon'ble Court has always protected inter-faith and inter-caste couples when they chose to marry, and has time and again stepped to protect such couples where their relationships were otherwise threatened by societal and familial pressure", added the plea. /IANS

Barelvi-cleric-seeks-action-against-Dhirendra-Shastri
Bareilly, Jan 26 : President of the All India Muslim Jamaat, Maulana Shahabuddin Razvi Barelvi has demanded action against Dhirendra Shastri under the

Taliban-to-set-new-rules-on-Afghan-women s-aid-work:-UN-official
Kabul, Jan 26 : A top UN official said that the Taliban-led government in Afghanistan are planning to set up new rules to allow women to work in some

SP-leader-Maurya-booked-for-Ramcharitmanas-remarks
Lucknow, Jan 25 : An FIR has been lodged against Samajwadi Party (SP) MLC Swami Prasad Maurya over his remark on the Ramcharitmanas, an epic poem in A

New Delhi, Jan 28 : Union Minister for Commerce and Industry, Piyush Goyal on Saturday called for creation of an international network of mentors, investors and entrepreneurs to strengthen the global […]

New Delhi, Jan 28 : The Delhi High Court has allowed the petitioner to implead the Central Board of Secondary Education (CBSE) and National Council of Educational Research and Training (NCERT) and the […]

New Delhi, Jan 28 : Delhi Police on Saturday found three bodies, including that of a woman and two children, with injury marks on their heads near the railway tracks in North-West Delhi's Narela area. […]