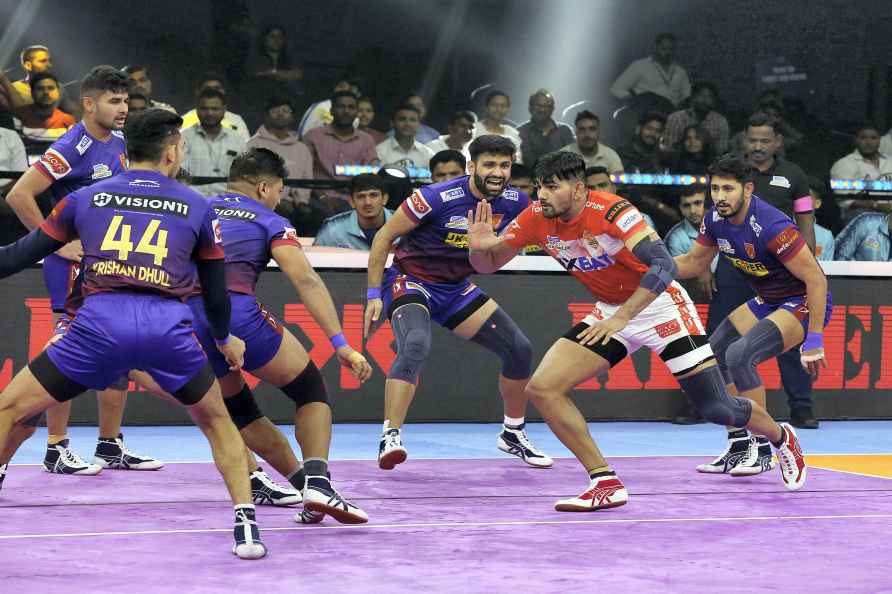 [Hyderabad: Players of Dabang Delhi (in blue) and Gujarat Giants play during their Pro Kabaddi League (PKL) 2022 match, at the Gachibowli Indoor Stadium in Hyderabad, Friday, Nov. 25, 2022. ( /PTI] Hyderabad, Nov 25 : Dabang Delhi K.C. continued their great form as they defeated Gujarat Giants 50-47 in the Pro Kabaddi League (PKL) Season 9 at the Gachibowli Indoor Stadium here on Friday. The Gujarat Giants put up a spirited fight in the final minutes of the match, but the Delhi players held their nerve and walked off the mat as winners of the match in the end. Sonu effected a Super Raid in the opening minutes of the match and helped the Giants inch ahead. Moments later, the Gujarat side inflicted an All-Out and took a massive lead at 10-3 in the 5th minute. However, Naveen Kumar and Ashu Malik picked up touchpoints and kept Delhi in the game at 8-11. Soon after, Naveen effected another raid and reduced the Giants to just two members on the mat. The Delhi side kept raging on and inflicted an All-Out in the 12th minute, but the Giants still held the lead at 15-14. Parteek Dhaiya pulled off a magnificent raid and helped the Gujarat side stay in the lead at 18-16. Dhaiya continued to showcase top form as the Giants kept forging ahead. However, Vijay Malik effected a raid and Sandeep Dhull tackled Parteek Dhaiya as the two sides went into half-time locked at 21-21. Ashu Malik carried out a fabulous multi-point raid in the opening minutes of the second half as the Delhi side roared into the lead at 25-21. Moments later, the Dabang Delhi K.C. inflicted an All-Out to extend their lead further at 30-22 in the 23rd minute. Ashu continued to pick up touchpoints as the Delhi side earned a massive lead at 35-23. Thereafter, the team from the capital city tackled Dhaiya to carry out another All-Out and attained a stronghold of the match at 41-29. Gujarat's Mahendra Rajput effected a Super Raid, catching out Amit Hooda, Vijay Malik and Vishal, but Delhi still held a comfortable lead at 46-38 in the 36th minute. However, Dhaiya didn't let the Giants lose hope as he picked up a multi-point raid and reduced the Delhi side to just one member on the mat. Moments later, the Giants inflicted an All-Out and reduced the gap between the two sides considerably to 43-48. However, it was too big a mountain to climb for the Giants as the Delhi side closed out a narrow victory. /IANS

By Armstrong Vaz Doha (Qatar), Nov 27 : Defending champions France became the first team to qualify for the knockout stage of the 2022 FIFA World Cup after their fighting 2-1 win over Denmark at St […]