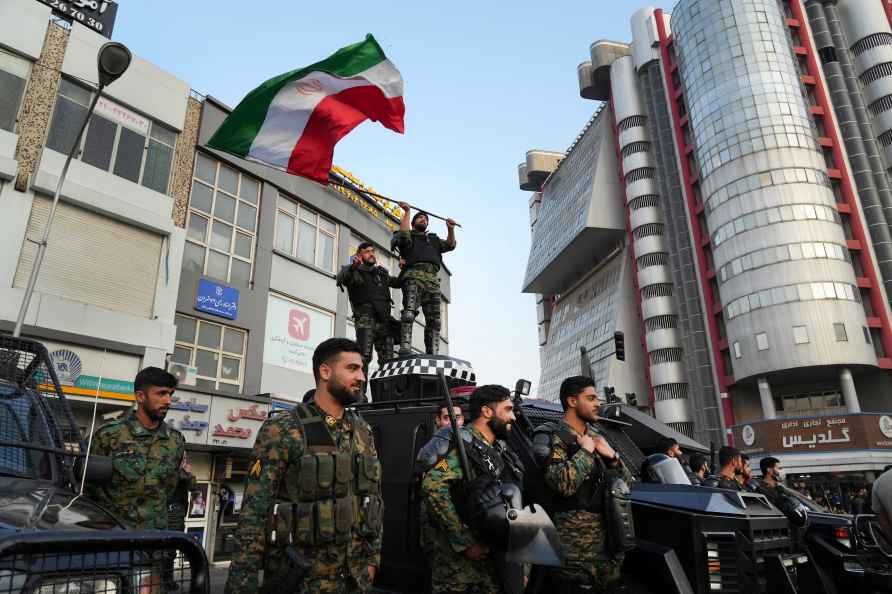 [An anti-riot police officer waves a representation of the Iranian flag during a street celebration after Iran's national soccer team defeated Wales in Qatar's World Cup, at Sadeghieh Sq. in Tehran, Iran, Friday, Nov. 25, 2022. Iran's political turmoil has cast a shadow over Iran's matches at the World Cup, spurring tension between those who back the team and those who accuse players of not doing enough to support the protests that started Sept. 16 over the death of a 22-year-old woman in the custody of the morality police. /PTI] By Armstrong Vaz Al Rayyan (Qatar), Nov 25 : Late goals by Roozbeh Cheshmi and Ramin Rezaeian gave Iran a crucial 2-0 win over 10-man Wales in the Group B match of the FIFA World Cup at the Ahmed Bin Ali Stadium here on Friday. Iran scored twice deep into stoppage time to stay in the World Cup and spoil Gareth Bale's record 110th cap for his country. A long-range effort by Cheshmi in the eight minutes into added time gave Iran the lead while Rezaeian coolly made it 2-0, three minutes from the second goal. The turning point of the match turned out to be and a disastrous one for Wales turned out to be the sending off of goalkeeper Wayne Hennessey, who got the yellow card upon video review in the 88th minute. Hennessey, who has over 100 caps for his country was sent off for reckless challenge on Mehdi Taremi far outside the penalty area with his right leg high up. He became the third goalkeeper in the history of the World Cup to have received a red card and the first player to see the red card at the current edition. Reserve keeper Danny Ward came on for midfielder Aaron Ramsey and Iran then struck twice to get a well-deserved victory. Iran took full advantage of one-man less in the Wales camp with Cheshmi firing into the bottom right corner from outside the penalty after a poor clearance from Joe Allen to give them the lead. Three minutes later, Rezaeian came up with an absolute thunderbolt, unstoppable, perfectly hammered into the corner after being set up by Taremi, beating substitute keeper Ward. The Iranian team played the right ball at the right time and were unlucky when Sardar Azmoun and Ali Gholizadeh hit the right and left post within a few seconds shortly after the restart. Wales, playing their first World Cup in 60 years, never up to the challenge, with the standard of passing, lot to be desired. Gareth Bale and Aaron Ramsey were guilty of a lot of those mistakes and if Wales are to match against England on Tuesday they will need more from the pair. Wales manager Rob Page took responsibility for the defeat. "Our performance before the red card was not acceptable," he said while speaking to BBC Radio Wales. "We hoped it would all come together today, but we were nowhere near the levels we've set and the standards we've set in recent games. One or two you can carry, but when there are so many off days there is only one outcome. I always take responsibility, that's my team, the sending off didn't help of course but at that point we had five forwards on the pitch so couldn't get a defensive shape. "But yes I'll always take responsibility for performances," he said. Page has huge task to lift the morale of the team ahead of the clash against England. "It's a difficult changing room at the minute but we will be ready (against England), it's a local derby and a great game to finish on and we'll be prepared to go." Iran coach Carlos Queiroz said they deserved to win and put behind the 6-2 loss to England in the opening match. "Two points. We played today with amazing character, which is the profile of our team. We play with a sense of unity, cohesion. After the first game we need to get back on route," he said during the press conference "The second point was to get rid of this bad feeling of bleeding. Football is a game of different moments. It's not because you win or lose. Sometimes you lose your dignity, your honour, but of course in our first game we were bleeding in our pride. This was an opportunity to rebound. We put a good scarf (bandage) to stop the bleeding. We played brilliantly and deserved to win," he said. /IANS