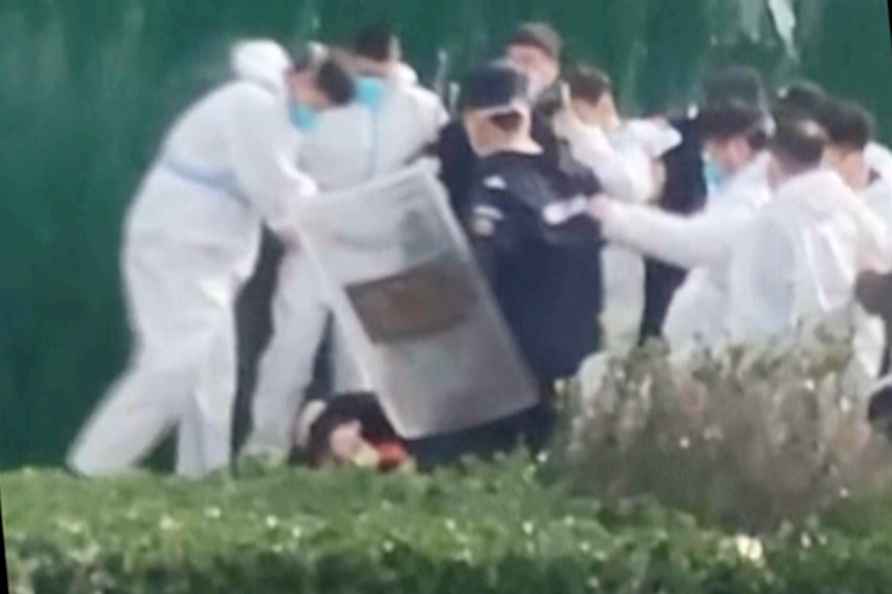 [Zhengzhou: In this photo provided Nov 23, 2022, security personnel in protective clothing surround and kick a protester after he grabbed a metal pole that had been used to strike him during protest at the factory compound operated by Foxconn Technology Group who runs the world's biggest Apple iPhone factory in Zhengzhou in central China's Henan province. Employees at the world's biggest Apple iPhone factory were beaten and detained in protests over pay amid anti-virus controls, according to witnesses and videos on social media Wednesday, as tensions mount over Chinese efforts to combat a renewed rise in infections. /PTI] Hong Kong, Nov 23 : Workers at Apple iPhone supplier Foxconns largest factory in China clashed with security forces and company officials amid protests over late bonus payments for work during Covid lockdowns, the media reported on Wednesday. According to South China Morning Post, violent protests broke out at Foxconn's iPhone factory in Zhengzhou, central China, that is already facing an exodus of employees over fresh Covid breaks. The latest problem can further hamper Apple's supply chain ahead of the holiday shopping season. "The protests started after workers, who have been under strict covid lockdown for weeks, learned bonus payments would be delayed," said the report. Foxconn, officially known as Hon Hai Precision, said in a statement that there had been public protests and "violence" at the factory. "With respect to violence, the company will continue to communicate with employees and the government to prevent similar incidents from happening again," the company added. Hundreds of workers were seen in social media videos, marching down a road, throwing sticks and bricks at anti-riot police. One former worker was quoted as saying that the terms of a "retention allowance", promised to new employees who stay at the plant until February 15, 2023, had been changed, according to reports. The workers now need to stay until March 15 to receive the bonus, according to the report. /IANS