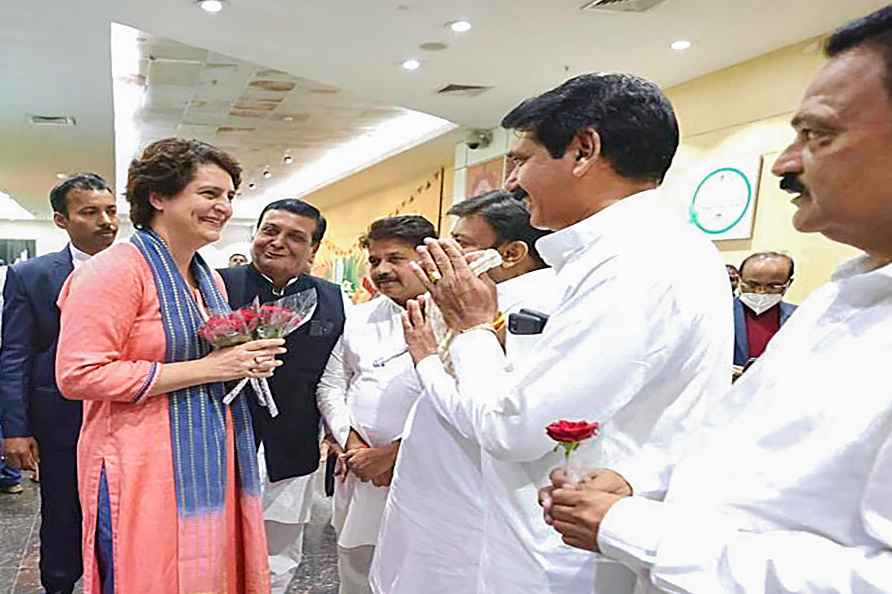 [Indore: AICC General Secretary Priyanka Gandhi Vadra being welcomed by Congress workers upon her arrival, in Indore, Wednesday, Nov. 23, 2022. Vadra will join the 'Bharat Jodo Yatra' led by her brother and party MP Rahul Gandhi in Madhya Pradesh. ( /PTI] Bhopal, Nov 23 : After winding up its Maharashtra leg, Congress leader Rahul Gandhi-led Bharat Jodo Yatra entered its first Hindi heartland state of Madhya Pradesh on Wednesday. The yatra, which entered the state on 77th day after it started from Kanyakumari in Tamil Nadu on September 7, was accorded a warm welcome on its arrival. At Burhanpur district, senior party leaders received their leader Rahul Gandhi. On reaching a village in Burhanpur district, Congress president of Maharashtra unit president Nana Patole handed over Bharat Jodo Yatra flag to Kamal Nath. Nath had reached Burhanpur with around 70 Congress MLAs from the state. The Yatra was welcomed by the state Congress unit in the presence of around a lakh party workers and leaders. It is scheduled to cover as many as seven districts, including Burhanpur, Ujjain, Agar, Malawa, Indore, Khargone, in the Hindi heartland. After taking over the Yatra's flag from Nana Patole, the march started around 7 a.m. in the state. As per the schedule, party general secretary Priyanka Gandhi Vadra, along with her husband Robert Vadra and their children, would reach Indore this evening and join the march at Burhanpur on Thursday, a Congress leader told IANS. Meanwhile, Burhanpur district administration has deployed magisterial officials along with ambulances, and fire brigades, while district police has deployed around 450 personnel along the yatra route. /IANS