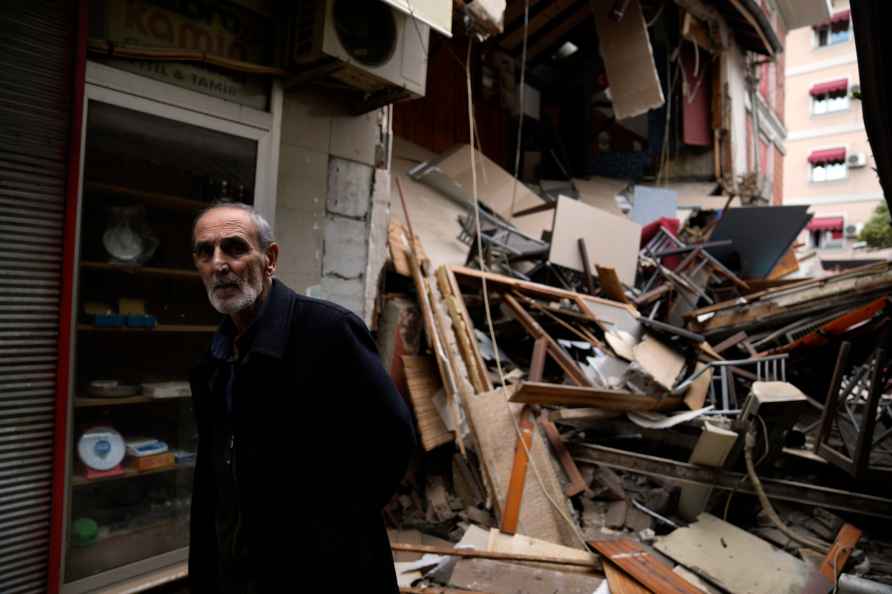 [A man walks part damaged shops in Duzce, Turkey, Wednesday, Nov. 23, 2022, after a magnitude 5.9 earthquake hit a town in northwest Turkey early Wednesday, causing damage to some buildings and widespread panic. At least 68 people were injured, mostly while trying to flee homes. The earthquake was centered in the town of Golkaya, in Duzce province, some 200 kilometers (125 miles) east of Istanbul, the Disaster and Emergency Management Presidency said. /PTI] Ankara, Nov 23 : A strong earthquake measuring 5.9 on the Richter scale struck western Turkey near the town of Duzce on Wednesday, injuring at least 55 people, authorities said. According to the national Disaster and Emergency Management Authority (AFAD), the temblor was centred in Golyaka district and it struck at 4.08 a.m. The injured were treated in hospitals in Duzce and nearby regions, some sustained injuries, Xinhua news agency quoted Interior Minister Suleyman Soylu as saying to Turkish channel NTV, adding that one person was seriously hurt after jumping from a balcony out of panic. There were no reports of heavy damage to buildings and power in the region was cut in a controlled way and then restored to some neighbourhoods, Soylu told reporters. The powerful quake, which occurred at a depth of 6.81 km, was also felt in Istanbul as well as in capital Ankara. Duzce is located about 210 km from Istanbul and some 236 km from Ankara. The AFAD said the quake was followed by a total of 18 aftershocks. Local media footage showed people rushing out of buildings in panic and waiting on the streets wrapped in blankets. Duzce Governor Cevdet Atay has announced the closure of schools for the day. In 1999, Duzce was hit by a 7.2 magnitude earthquake which lasted 30 seconds, killing 845 people and injuring nearly 5,000 others. /IANS