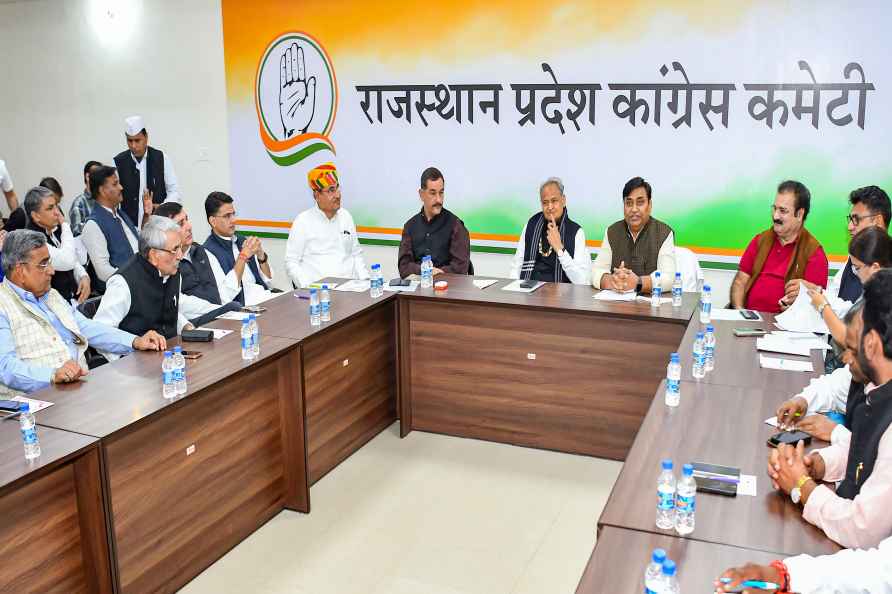 [Jaipur: Rajasthan Chief Minister Ashok Gehlot, AICC General Secretary Jitendra Singh Alwar, Rajasthan Pradesh Congress Committee (RPCC) President Govind Singh Dotasra, Congress leader Sachin Pilot and others during state level coordination committee meeting on party's 'Bharat Jodo Yatra', at RPCC war room in Jaipur, Wednesday, Nov. 23, 2022. ( /PTI] Jaipur, Nov 23 : As hectic preparations are underway in Rajasthan for Rahul Gandhi's Bharat Jodo Yatra scheduled to enter the desert state on December 5, Chief Minister Ashok Gehlot and former Deputy Chief Minister Sachin Pilot will attend a committee meeting on Wednesday amid the ongoing political crisis. The first meeting of the coordination committee of 33 leaders of the Bharat Jodo Yatra was called in the Congress War Room on Wednesday. While Pilot has already arrived at the meeting venue, Gehlot was yet to reach, said sources. "Gehlot and Pilot will be on the same stage for the first time after the political uproar caused by the boycott of the Congress Legislature Party meeting by the MLAs of the Gehlot faction on September 25," party workers said. "The two will be at the same place after nearly two months since the incident. This meeting is being considered very important in terms of preparations for Rahul Gandhi's visit," they added. State in-charge Ajay Maken who is also a member of the coordination committee, will not attend Wednesday's meeting as he has resigned from the post of the party's Rajasthan in-charge. Although Maken's resignation is yet to be accepted, he has not called for any meeting or decision regarding Rajasthan. Maken resigned on November 8 expressing displeasure over no action being taken against Shanti Dhariwal, Mahesh Joshi and Dharmendra Rathore, who were held responsible for boycotting the Congress Legislature Party meeting on September 25. /IANS

Tashkent, Nov 27 : Three people were killed and 38 others injured in a road accident involving a bus and a truck in the Andijan region in eastern Uzbekistan. The collision took place between the […]