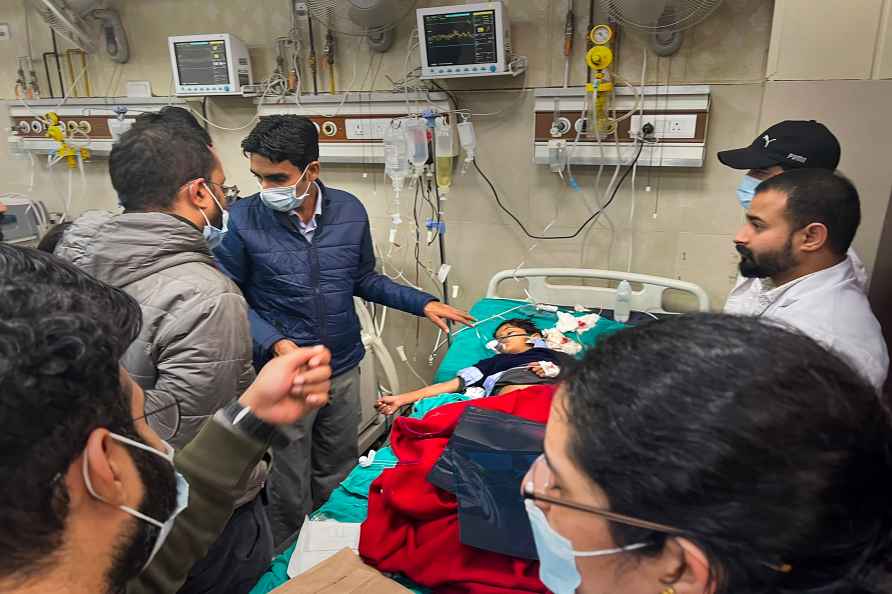 [Jammu: An injured child undergoes treatment at a hospital after three siblings, on their way to school, allegedly jumped from a railway bridge on seeing an approaching train, in Jammu, Wednesday, Nov. 23, 2022. An 11-year-old girl was killed and her two siblings injured in the incident, according to officials. ( /PTI] Firozabad, Nov 23 : In a shocking incident, a 20-year-old HIV positive woman who had gone into labour, was allegedly left unattended by the medical staff who "refused" to touch her. The woman gave birth to a boy who died hours later. Firozabad Medical College principal Dr Sangeeta Aneja said, "A probe has been ordered on the basis of a complaint received from the woman's family." The woman's father, who works in the bangle-making industry, said, "The private hospital was asking Rs 20,000 for normal delivery. After consulting the district field officer of National AIDS Control Organisation (NACO), I took my daughter to the medical where she lay on a stretcher and kept crying in pain for over six hours. Despite repeated requests, no doctor came to help her." After a delay of over six hours, when the matter reached senior officials, a nurse took her to the labour room. She gave birth to a baby boy who was having breathing difficulties. The staff did not allow the family to see the child and took him to a special new-born care unit. The next morning, the child died. NACO field officer Sarita Yadav said, "I had been keeping in constant touch with the HIV-positive woman. The family was unable to afford treatment at a private hospital so I called them to the medical college. But no doctor or hospital staffer came near her. For hours I requested medical assistance. The woman was in a lot of pain. I have apprised senior officials about the incident." The woman has been living with her parents in Firozabad after she got separated from her husband a year after her wedding. She got the HIV infection soon after getting married, her family claimed. /IANS