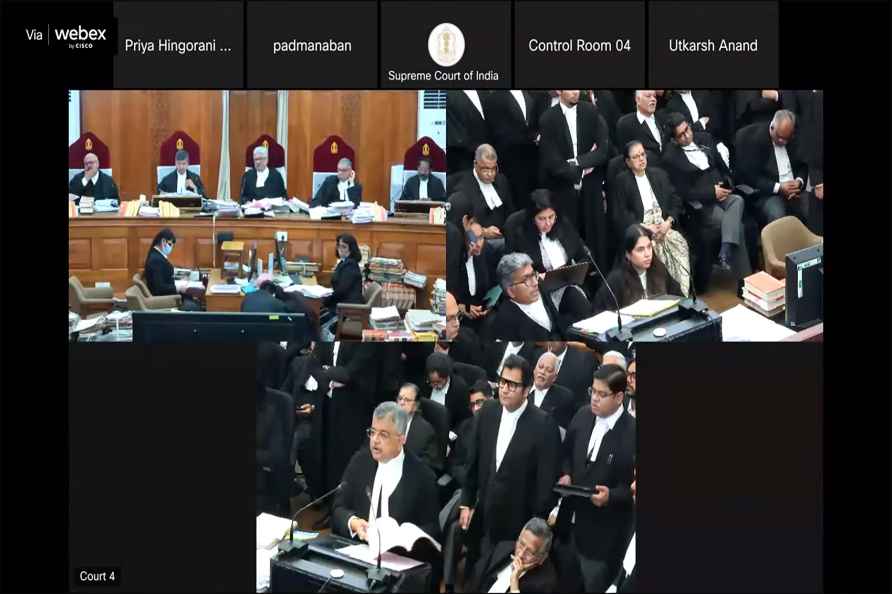 [**EDS: VIDEO GRAB** New Delhi: A Constitution bench headed by Justice KM Joseph and also comprising Justices Ajay Rastogi, Aniruddha Bose, Hrishikesh Roy and CT Ravikumar amid a hearing of a batch of pleas seeking a collegium-like system for the appointment of Election Commissioners (ECs) and Chief Election Commissioner (CEC), at the Supreme Court in New Delhi, Wednesday, Nov. 23, 2022. ( /PTI] New Delhi, Nov 23 : The Supreme Court on Wednesday orally observed that the need is for a Chief Election Commissioner (CEC) who can even take action against the Prime Minister and also asked the Centre to show the mechanism adopted in the appointment of an Election Commissioner (EC) last week. A five-judge Constitution bench headed by Justice K.M. Joseph said: "We need a CEC who can even take action against a PM." The bench, also comprising Justices Ajay Rastogi, Aniruddha Bose, Hrishikesh Roy and C.T. Ravikumar, said suppose for example, there is some allegation against the Prime Minister and the CEC has to act, but the the latter is weak-kneed and does not act. The bench queried the Centre's counsel that was it not a complete breakdown of the system. The CEC is supposed to be insulated from political influence and should be independent. It further added that these are aspects on which "you (the Centre's counsel) must delve into, and why we require an independent larger body for selection and not just Cabinet". The bench orally observed that committees say dire need for changes, and politicians also shout from rooftop but nothing happens. The Centre is represented by Attorney General R. Venkataramani, Solicitor General Tushar Mehta, and Additional Solicitor General Balbir Singh. The bench also queried the Centre's counsel to show the mechanism adopted in the appointment of the Election Commissioner. Former Bureaucrat Arun Goel assumed the office of Election Commissioner on Monday, after being appointed to the post on November 19. Since May,this year, the post of one Election Commissioner in the three-member Commission was lying vacant after Sushil Chandra retired as the CEC. During the hearing, the AG contended that the convention is that all senior bureaucrats and officers at the state and the central government are taken into consideration while appointment and this is scrupulously followed. The AG further submitted that the appointment is done on the basis of convention and there is no separate appointment procedure of CEC. He added that one is appointed as EC and then on the basis of seniority a CEC. Justice Rastogi observed that there should be a transparent mechanism in the appointment of the EC, and the mechanism should be such that people should not question it. He added that, "you just appointed someone as EC 2 days ago... It should be fresh in memory. Show us (the mechanism applied in the appointment)". At this juncture, the AG replied: "So are we saying that there is no confidence in the Council of Ministers?" to which Justice Rastogi said, "no, we are saying for our satisfaction show us the mechanism you adopted in the appointment two days ago". The AG replied that he has already shown how a convention is followed, the process involved in the appointment, and appointments are made on the basis of seniority, and on the aspect of recent EC appointment, he added that the office was vacant since May. "It is not a pick and choose system at alla there is a process," said the AG. The bench said it understands that CEC is appointed from amongst the ECs, but then there is no basis, and why is the Centre only confined to civil servants? The AG said that is a completely different debate, and can we bring in a national pool of candidates, that is a larger debate. He further added that there is also an in-built guarantee in the system, whenever the President is not satisfied with the suggestion then he can take an action. The hearing in the matter will continue after lunch. The top court is hearing a batch of pleas seeking a collegium-like system for the appointment of the CEC. On Tuesday, the Supreme Court said the CEC heads an institution, though with his truncated tenure, he cannot do anything substantial and added that "silences of the Constitution" is being exploited by all and expressed concern at the absence of a law governing the appointments of ECs and CEC. Last week, the Centre opposed petitions seeking a collegium-like system for the selection of CECs and ECs. The apex court in October 2018, referred a PIL seeking a collegium-like system for the selection of CECs and ECs to a five-judge Constitution bench. /IANS

Tashkent, Nov 27 : Three people were killed and 38 others injured in a road accident involving a bus and a truck in the Andijan region in eastern Uzbekistan. The collision took place between the […]