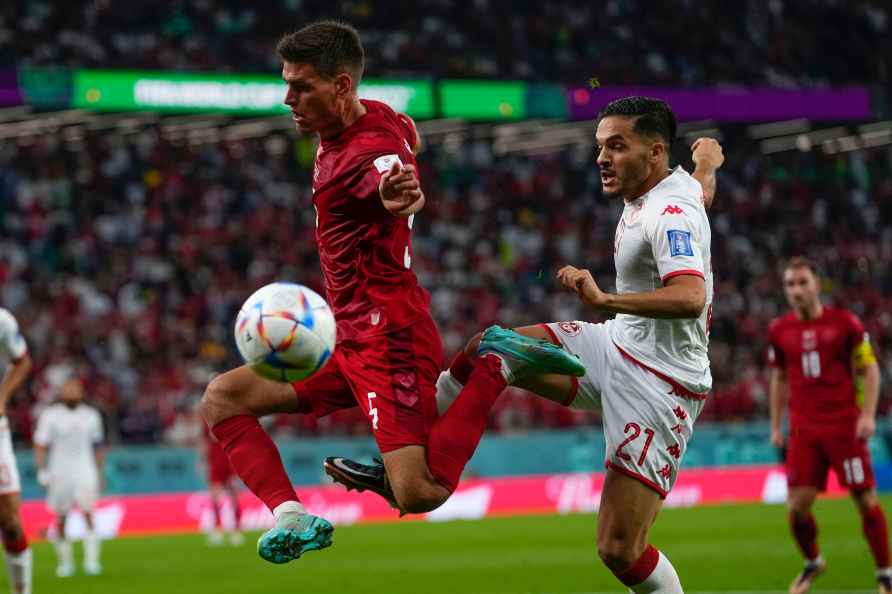 [Denmark's Joakim Maehle, left, vies for the ball with Tunisia's Wajdi Kechrida during the World Cup group D soccer match between Denmark and Tunisia, at the Education City Stadium in Al Rayyan, Qatar, Tuesday, Nov. 22, 2022. /PTI] By Armstrong Vaz Doha, Nov 23 : Tunisia survived a late penalty scare to share points with Denmark in the Group D match of the 2022 FIFA World Cup at the Education City Stadium in Doha, Qatar, on Tuesday evening. The Eagles of Carthage, which have never reached the World Cup knockouts in five previous attempts, dominated the early stages as they kept the pressure on the Danes forcing them into committing mistakes. On the other hand, Denmark took their time to settle down but stepped up the pace as the game progressed with their talisman Christian Eriksen controlling the midfield traffic. Backed by their vociferous supporters, Tunisia brought energy to the game right from kick-off to open their Group D campaign with a strong performance against one of the pre-tournament dark horses. The Africans went into the offensive very early into the match and nearly ripped open the defence in the 11th minute as Mohamed Drager's long-range effort deflecting off Andreas Christensen and going inches off the target. Although the Danes made a slow start to the proceedings, they came into their own with Eriksen keeping Tunisian defenders busy, the Danes flattered once in close proximity to the goal. At the other end, Kasper Schmeichel made sure the teams went into the half time break with the scores tied at 0-0 bringing off a superlative save keeping out a try from Anis Ben Slimane. In the second half, the Tunisians continued to keep the pressure with some hard tackles and came up with the occasional attacks to rattle the Danes. A combined move between Issam Jebali and Youssef Msakni fizzled out as an onrushing Schmeichel brilliantly tipped the ball away from the goal. The Tunisians continued to look for opportunities to cut through the heart of the Denmark defense. At the other end Denmark had the two best chances in the second half. On the first occasion, Aymen Dahmen's tipped over a 69th minute try by Eriksen and of the resultant corner kick substitute Andreas Cornelius headed effort from close range ended into the goal post. The Tunisians continued to be on the tenterhooks in injury added on time as they survived a late VAR over a possible penalty decision over a handball, the VAR review found no handball been committed by Tunisian players. In the end, the Tunisians were happy for the one point from the match. Tunisia take on Australia in the next round match on November 26 and wind up their group engagements against Australia on November 30. /IANS

New Delhi, Nov 25 : The National Investigation Agency (NIA) on Friday filed a supplementary charge sheet in a case related to a criminal conspiracy hatched to carry out terror attacks by Hizbul Mujahi […]