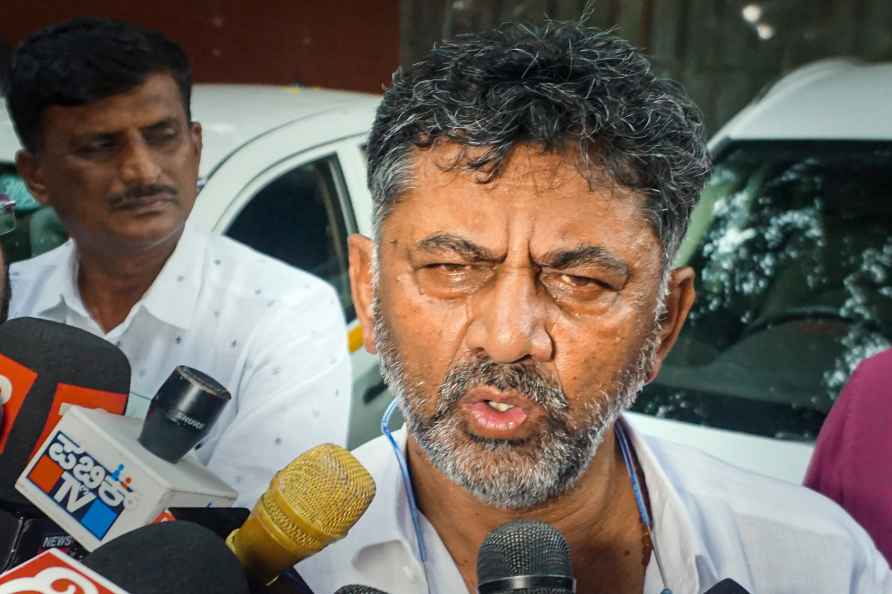 [New Delhi: Congress leader DK Shivakumar addresses media outside the Enforcement Directorate (ED) office after being summoned for questioning in connection with the National Herald money laundering case, in New Delhi, Friday, Oct. 7, 2022. ( /PTI] New Delhi, Oct 7 : Karnataka Congress chief D.K. Shivakumar on Friday arrived at the Enforcement Directorate (ED) headquarters here to join the investigation in the National Herald newspaper case. The agency will be probing him on a few facts related to the financial transactions of AJL and Young Indian (YI). The ED had summoned Shivkumar and his brother, D.K. Suresh to record their statements. Earlier, Congress leaders J. Geeta Reddy, Shabbir Ali and P. Sudarshan had reportedly joined the probe. They were questioned about Young India and Dotex Merchandiseconnection. The Dotex firm is reportedly situated at 5, Lower Rawdon Street in Sreepally of Ballygunge, Kolkata. It is situated in a residential apartment named 'Aakash Deep'. "Dotex firm allegedly paid Rs 1 crore to Young Indian. This was a loan which they gave to YI in 2010. The loan given by Dotex Merchandise was never returned. YI was just incorporated when this loan was paid," said an ED source. The ED has doubts that the money was laundered through YI. National Herald case timeline November 1, 2012, former BJP's Rajya Sabha Member Subramanian Swamy lodged a case in National Herald newspaper case. June 26, 2014, Congress leader Sonia Gandhi and Rahul Gandhi were summoned. August 1, 2014, the Enforcement Directorate (ED) lodged the Prevention of Money Laundering case in the matter. December 19, 2015, a Delhi court granted bail to Gandhis. In 2016, the Congress moved court demanding quashing of the case. In 2019, properties worth Rs 64 crore of the National Herald newspaper were seized by agencies. The Young Indian Pvt Ltd was owned by Sonia Gandhi, Rahul Gandhi, Motilal Vora and Oscar Fernandes. Motilal Vora, the longest-serving treasurer of the Congress party, died in 2020 and Fernandes passed away in 2021. Interestingly, Rahul Gandhi, when he was questioned regarding the financial aspects of the Young Indian-AJL deal, had told officials that all the transactions were handled by Vora /IANS

New Delhi, Dec 7 : Meta Founder and CEO Mark Zuckerberg on Wednesday announced the company is bringing digital avatars to WhatsApp. On WhatsApp, people can now use their personalised avatars as […]