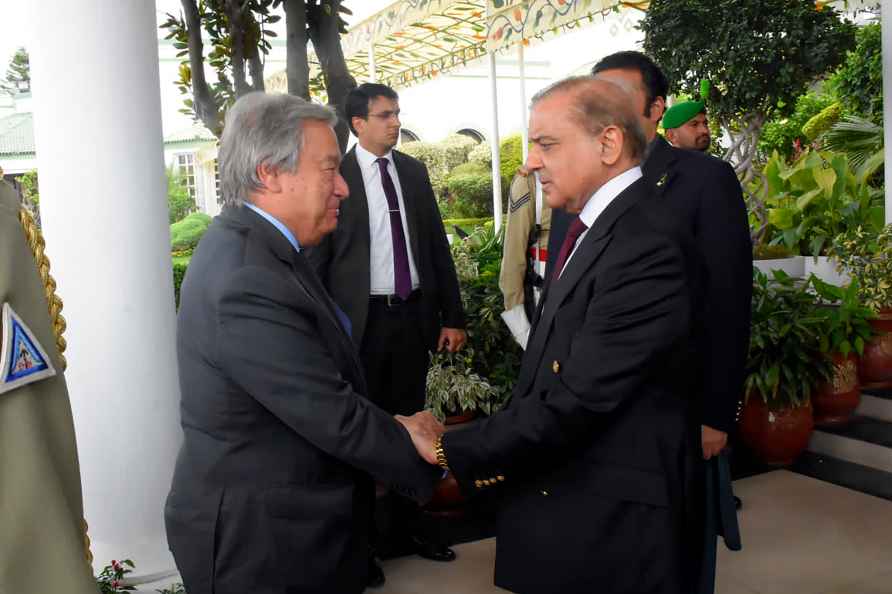 Lahore, Oct 6 : Pakistan Prime Minister Shehbaz Sharif has said that the country should not be forced to go out with a "begging bowl" to rich polluting nations after the floods that have devastated the country and said he would be seeking "climate justice" from the international community, local media reported. Speaking from his home in Lahore, Sharif warned that Pakistan is facing an unprecedented crisis of health, food security and internal displacement after the "apocalyptic" monsoons which put a third of Pakistan's regions under water. Some areas were hit by 1.7 m of rainfall, the highest on record, The Guardian reported. Scientists have determined that the floods were due to climate breakdown. But with Pakistan responsible for 0.8 per cent of global carbon emissions, Sharif said it was the "responsibility of the developed countries, who caused these emissions, to stand by us". "I've never seen this kind of devastation, inundation and suffering of our people in my lifetime," said Sharif, The Guardian reported. "Millions have been displaced, they have become climate refugees within their own country." While the international community has given billions in funds and donations and commitments for further support, Sharif was clear it was "not enough". "The enormity of this climate-induced catastrophe is beyond our fiscal means," he said. "The gap between our needs and what is available is too wide and it is widening by the day," he said. The official death toll from the floods is 1,600, though many estimates on the ground have been higher. More than nine million people have been displaced and over 2 million homes destroyed, and millions of families have been forced to live in makeshift tents or shelters on roadsides. The extent of the damage has been put at between $30bn and $35bn but Sharif said it was "a rough estimate, it could be more", with more than 30,000km of roads destroyed along with bridges, railways and power lines, as well as 4m hectares (10m acres) of crops washed away, The Guardian reported. /IANS

MCD poll results: AAP gets 134 out of 250 wards
New Delhi, Dec 7 : With 134 seats, the Aam Aadmi Party (AAP) on Wednesday won the prestigious battle for the Municipal Corporation of Delhi (MCD), end

New Delhi, Dec 7 : With 134 seats, the Aam Aadmi Party (AAP) on Wednesday won the prestigious battle for the Municipal Corporation of Delhi (MCD), ending the 15-year-rule of the BJP. However, th […]

Hindu is one who understands that diversity is multiple expressions of same unity: RSS chief Mohan Bhagwat.

Hindu is one who understands that diversity is multiple expressions of same unity: RSS chief Mohan Bhagwat. […]

Delhi's verdict a message for nation to do positive politics: Kejriwal after AAP's MCD win

New Delhi, Dec 7 : After the Aam Aadmi Party on Wednesday clinched a clear majority in the Municipal Corporation election, Delhi Chief Minister Arvind Kejriwal said the verdict was a message for the w […]

New Delhi, Dec 7 : The Supreme Court on Wednesday directed the Centre and the Reserve Bank of India (RBI) to submit relevant records in connection with the government's 2016 demonetisation decision fo […]