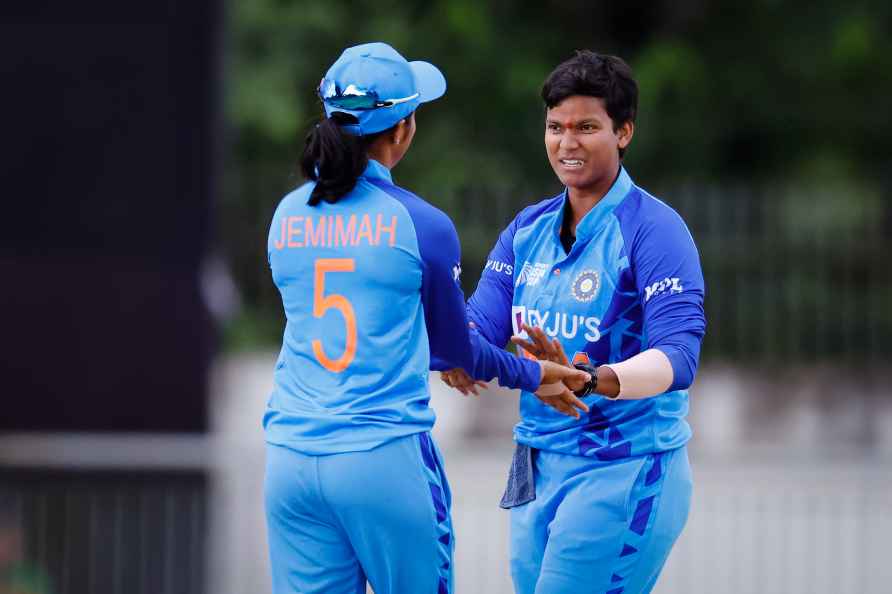 [**EDS: TWITTER IMAGE POSTED BY @BCCIWomen ON FRIDAY, OCT. 7, 2022** Sylhet: Indian women's team player Deepti Sharma celebrates a wicket during the Women's Asia Cup 2022 cricket match between India and Pakistan, at Sylhet International Cricket Stadium, Sylhet. ( /PTI] Chennai, Oct 7 : Former India head coach Ravi Shastri believes that despite the absence of Jasprit Bumrah and Ravindra Jadeja from the upcoming T20 World Cup in Australia, it is an opportunity for the side to discover a 'new champion' player within the set-up. With Jadeja out due to a right-knee injury which needed surgery, Axar Patel was slotted into India's playing eleven as a like-for-like replacement. On the other hand, with Bumrah unavailable due to back injury, senior pacer Mohammed Shami could be promoted from a travelling reserve to 15th player in India's T20 World Cup squad. "(It's) unfortunate. There's so much cricket being played, and people get injured. He is injured, but it's an opportunity for somebody else. There is nothing you can do with injury. I think we have got enough strength and we have a good team. I have always believed if you make it to the semifinals, it could be anyone's tournament. "The endeavour would be to start well, get to the semis, and then you have got enough strength to probably win the (World) Cup, for all you know. Bumrah not being there, Jadeja not being there -- it hampers the side -- but it's an opportunity to unearth a new champion," Shastri was quoted as saying by ESPNCricinfo during the launch of Coaching Beyond, his new initiative with B. Arun and R. Sridhar, at Lalaji Omega International School in Chennai. Shami had been picked in India's squads for the series against Australia and South Africa. But he missed out on playing both series due to a Covid-19 positive result. Though he has played just one T20I in Australia, Shami has sufficient experience of playing previously in the country mainly through Border-Gavaskar Test series and 2015 ODI World Cup. "Precisely, his experience (in Australian conditions is his strength). India have been there a lot in the last six years and he has been an integral part of all those tours. So that experience (of having done well in Australia) counts," added Shastri. Arun, the former India bowling coach who is now serving in the same capacity with Kolkata Knight Riders in the IPL, sounded optimistic about India's chances at the T20 World Cup. "The expectation is that India has to keep winning. If they lose, people tend to criticise them. They are showing a lot of promise, especially in World Cup events, and Australian conditions will suit them." Shastri was enthusiastic about the possible launch of women's IPL next year and believes India are just one step away from winning a global women's tournament to create a long-lasting impact similar to what the men's team achieved after winning the 1983 World Cup in England. "Fabulous (on the launch of the women's IPL). They are only that (little) far away from winning something big. You see what happened with the men's cricket team when they won the World Cup in '83. "So, if the women win a World Cup, the interest that will be generated will be unbelievable. The more and more I see of the Indian women play, they are far more self-confident with the exposure they've got, and they have far more self-belief that they can actually go the distance." /IANS