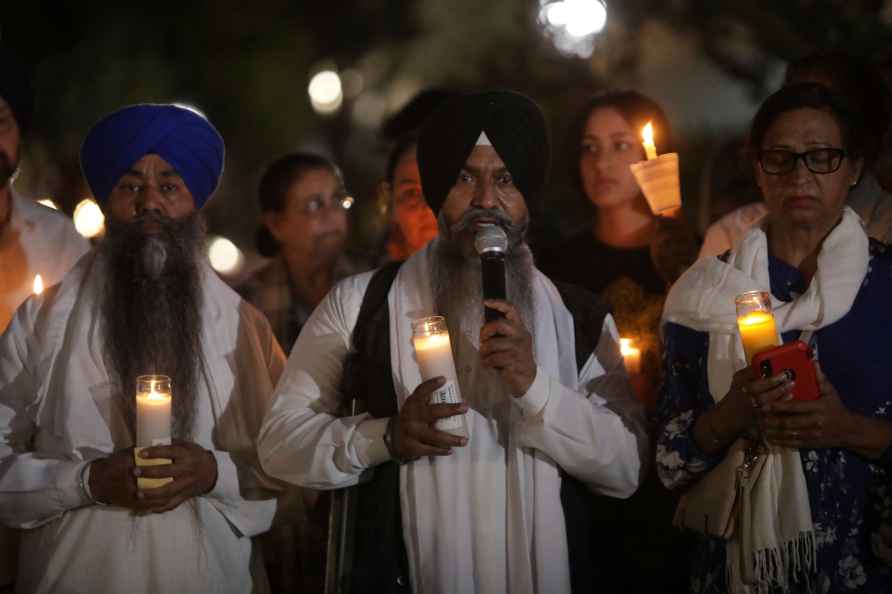 [Babaji Karamjit Singh, center, a Sikh priest from the Peach Ave Gurudwara, leads prayers during candlelight vigil for a Singh family at Bob Hart Square in Merced, Calif., on Thursday, Oct. 6, 2022. Four members of the Singh family were abducted and killed this week. The suspect in the kidnapping and killings of an 8-month-old baby, her parents and an uncle had worked for the family?Äôs trucking business and had a longstanding feud with them that culminated in an act of ?Äúpure evil,?Äù a sheriff said Thursday. /PTI] By Meenakshi Iyer New Delhi, Oct 7 : A total of six murders, including that of an eight-month-old infant, within a week's time begs answer to the question every Indian wants to know -- is the community safe in the US? The US is home to more than 4.5 million Indians, which is the highest-earning ethnic group in the country. President Joe Biden recently went on record to say: "It's amazing, IndianÂ?of descentÂ?Americans are taking over the country: you, my Vice President (Kamala Harris), my speechwriter, Vinay (Vinay Reddy)... You guys are incredible!" Even as one grappled with the shock of four Sikh family members, within the age groups of eight months to 39 years, found dead in California, news of 20-year-old student Varun Manish Chheda stabbed to death on Purdue University campus, sent shockwaves running across the Indian community world over. Earlier this week, Gurpreet Kaur Dosanjh, a Walmart employee, was shot dead and lumped inside a car in a parking lot in San Jose, California. In June this year, Satnam Singh, 31, was shot dead while sitting in a parked SUV down the street from his home in New York. This came days after Sai Charan Nakka, a 25-year-old techie from Telangana, was killed after sustaining an apparent gunshot wound to his head in Maryland Apart from the gruesome killings, Indian-Americans have been consistently battling racial taunts, assaults, hate crime robberies, and vandalism of their properties. According to the Federal Bureau of Investigation (FBI), 161 anti-Asian hate crimes took place in 2019, which rose to 279 in 2020. Giving a religious break-up, the FBI said that 54 anti-Sikh crimes occurred in 2019, which rose to 89 in 2020. Anti-Asian hate crime increased by 339 percent last year compared to the year before, with New York, San Francisco, Los Angeles, and other cities surpassing their record numbers in 2020, according to research by the Center for the Study of Hate and Extremism. Late in August, four Indian American women were told that they were "ruining" America and should "go back to India" by a Mexican-American woman in Texas. In the same month, Krishnan Jayaraman was racially abused and called a "disgusting Hindu" by Californian Rajinder Singh in a Taco Bell outlet in Fremont. Community members have also expressed concerns over multiple brazen attacks on Mahatma Gandhi's statue in New York and other US cities. "Such bigoted attacks motivated by racism, xenophobia, and other forms of hate victimise not only those directly targeted by them but also broader communities through creating an atmosphere of fear and danger," Indian-American Congressman Raja Krishnamoorthi had said recently. Last month, Indian-Americans held a peaceful protest at Time Square against the recent spurt in hate crimes and instances of vandalism of the Gandhi statue in the city. An Indian American Attitudes Survey released last year found that "one in two Indian-Americans reports being discriminated against in the past one year, with discrimination based on skin colour identified as the most common form of bias". Somewhat surprisingly, Indian-Americans born in the US are much more likely to report being victims of discrimination than their foreign-born counterparts," the survey, supported by Carnegie Endowment, said. Biden had spoken strongly against hate crimes at a recent event against racism. It remains to be seen what Biden, who boasts of having appointed more than 130 Indian-Americans to key positions in his administration so far, does now for the community that has made significant contributions to this great landscape. (Meenakshi Iyer can be reached at meenakshi.i@ians.in) /IANS

Mumbai, Dec 5 : Actress Malaika Arora said her son Arhaan was very supportive as he said yes to her to take forward her reality show 'Moving In With Malaika'. In the opening episode of the much […]

Mumbai, Dec 5 : Differences have emerged between the key stakeholders, i.e., lenders and process advisors of Reliance Capital over the resolution plan options. The COC is meeting Tuesday to resolve th […]