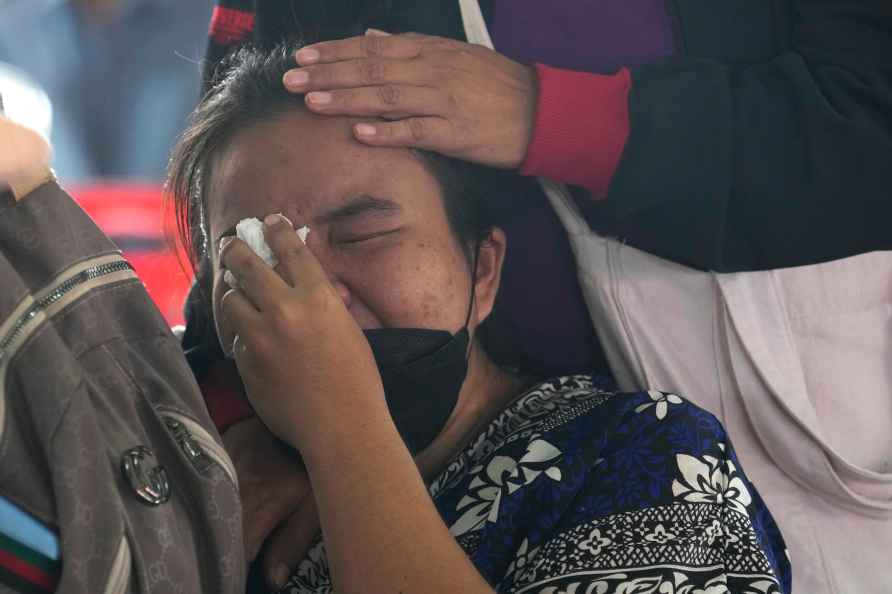 [A relative of a victim cries outside the Childcenter Uthai Sawan that was attacked by a lone assailant in the rural town of Uthai Sawan, north eastern Thailand, early Friday, Oct. 7, 2022. A former policeman facing a drug charge burst into a day care center in northeastern Thailand on Thursday, killing dozens of preschoolers and teachers before shooting more people as he fled in the deadliest rampage in the nation's history. /PTI] Bangkok, Oct 7 : The death toll from a horrific gun and knife attack at a childcare centre in Thailand's Nong Bua Lamphu province has increased to 38, most of them children, local authorities said. The attacker has been identified as a former police officer who was arrested early this year over drug allegations and was dismissed from his post in June, Xinhua news agency quoted National Police Chief Damrongsak Kittipraphat as saying at a press conference late Thursday. He was supposed to face trial on drugs charge in court on Friday, he added. When the attacker entered the childcare centre on Thursday afternoon, he was suspected to be under the influence of drugs and stress due to the upcoming trial, according to Damrongsak. The number of the victims included the shooter and his family members, who were found dead in his residence, the police chief said, without mentioning the number of the injured in the incident. "About the horrifying incident, I would like to extend my deepest condolences to the families of the dead and injured," Thai Prime Minister Prayut Chan-o-cha wrote on social media, adding that he has ordered the national police chief to "fast-track an investigation". Prayut will head to Nong Bua Lamphu on Friday in support of the family of the victims, and he has ordered the provision of psychological counseling services to the people concerned, acting government spokesperson Anucha Burapachaisri said. Thailand's King Maha Vajiralongkorn, together with the Queen, are also expected to visit the community. TV footage showed ambulances and families of the victims gathering outside the centre after the incident. "I cannot see my child's face," cried a man, who lost his pregnant wife in the incident, as a video showed the heartbroken man crying on the ground at the scene. He and his wife, a teacher at the centre, were expecting a baby next month. A woman working at the centre told local media that they were having lunch when she heard sounds and saw the injured falling to the ground. The shooter broke the window in as the door was locked, and she succeeded in fleeing the scene, she said. Suwit Chanwon, deputy provincial governor, said: "We are making sure that all the injured and the family members of the victims are well treated." According to Anucha, the family of the deceased will get a compensation of 200,000 baht ($5,360) per person. On Friday morning, parents gathered outside the building on Friday morning, weeping and clutching their children's favourite toys, while others showed up to pay their respects. Flags across the country are flying at half-mast. Thursday's attack comes less than a month after an army officer shot dead two of his colleagues at a base in Bangkok. In 2020 a soldier killed 29 people and injured dozens more in the city of Nakhon Ratchasima. /IANS

New Delhi, Dec 7 : Meta Founder and CEO Mark Zuckerberg on Wednesday announced the company is bringing digital avatars to WhatsApp. On WhatsApp, people can now use their personalised avatars as […]