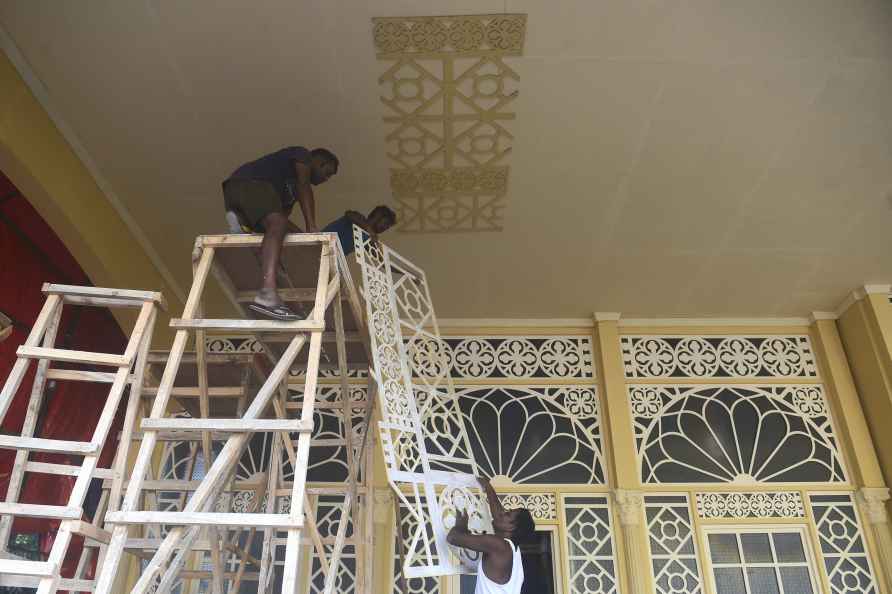 [Kolkata: Workers busy in preparing a stage for the Puja carnival on Red Road in Kolkata, Oct. 6, Thursday, 2022. Chief Minister Mamata Banerjee will be the chief guest and the programme will be attended by senior officials of the State Government and foreign missions. ( /PTI] Kolkata, Oct 6 : West Bengal Chief Minister Mamata Banerjee on Thursday announced a compensation of Rs 2 lakh each for the families of those killed in the Mal river flash flood in Jalpaiguri during idol immersion of Goddess Durga. A sum of Rs 50,000 will also be granted to the families of the injured. The tragedy struck late on Wednesday when thousands of people assembled for immersion of Durga idols on the occasion of the Vijaya Dashami. In a statement, the chief minister has announced that a compensation of Rs 2,00,000 will be granted to each of the families of the persons killed in the flash flood. Similarly, a compensation of Rs 50,000 will be given to each of the families of the persons injured in the same mishap. "Eight people lost their lives, I pray that their families find strength and solace in these difficult times," the statement from the chief minister read. The chief minister also informed that a total of 13 persons are undergoing treatment at Mal Super Specialty Hospital. "I pray for their speedy recovery," she said. The chief minister's announcement on this count came minutes after the leader of the opposition in West Bengal Assembly Suvendu Adhikari launched a scathing attack on the state chief minister and her office alleging that the CMO seems to be sleeping on the issue. There is no clarity on the details and number of missing persons, the leader of the opposition alleged. Meanwhile, the CPI(M) politburo member and the party's state secretary in West Bengal, Md Salim has issued a statement accusing the Jalpaiguri district administration and Mal Municipality of deliberately arresting the flow of river Mal by using stone- boulders to facilitate idol immersion. "Flash flood, which is common in Mal river, can be dangerous at times as it happened on Wednesday evening. Had the administration been cautious such a mishap could be avoided," he added. /IANS

Three Meghalaya MLAs -- two of NPP and one of TMC -- submit resignation to speaker: Assembly official.

Three Meghalaya MLAs -- two of NPP and one of TMC -- submit resignation to speaker: Assembly official. […]