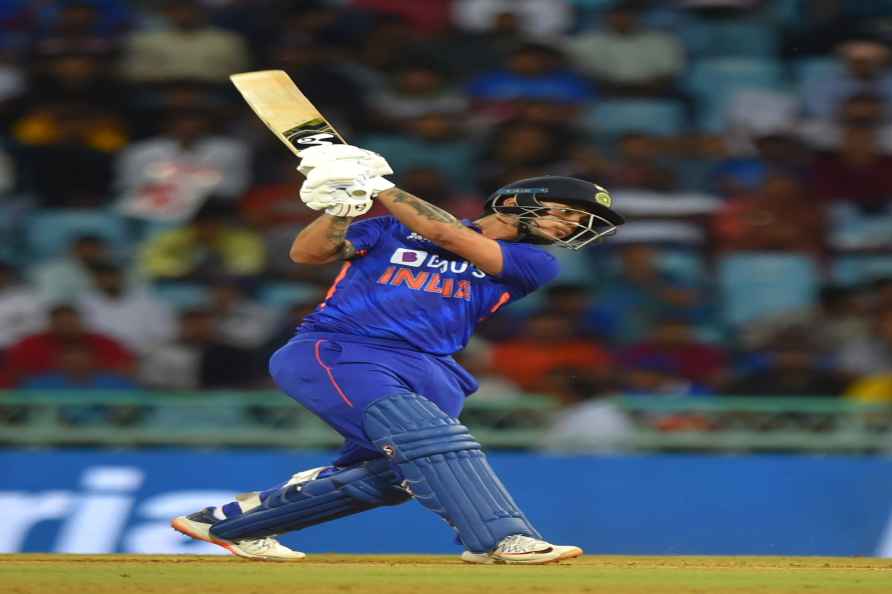 [Lucknow: India's Ishan Kishan plays a shot during the 1st ODI cricket match between India and South Africa, at the Bharat Ratna Shri Atal Bihari Vajpayee Ekana Cricket Stadium, Lucknow, Thurday, Oct. 6, 2022. ( /PTI] Lucknow, Oct 6 : Ruturaj Gaikwad and Ravi Bishnoi have been handed debuts in ODI cricket as India won the toss and elected to bowl first against South Africa in the series opener at the Bharat Ratna Shri Atal Bihari Vajpayee Ekana Cricket Stadium here on Thursday. The match has been reduced to 40 overs per side, with each bowler to bowl a maximum of eight overs. The first power-play will be of first eight overs, followed by 24 overs of second power-play and last eight overs of third power-play. India skipper Shikhar Dhawan said his decision of electing to bowl first came from seeing the moisture on the pitch due to a lengthy rain delay. "We would like to field first as there is a bit of moisture on the wicket and we want to exploit that. We got six batters and bowlers bowlers playing. In the bowlers, we have two spinners and three pacers." South Africa skipper Temba Bavuma said he wanted to bowl first too, observing that the pitch might be difficult to bat early on. "We have a job to do with the bat and we need to adapt accordingly after the first few overs. You gotta be able to adapt to different formats quickly and we still want to keep those T20 skills in check." With ICC Men's Cricket World Cup Super League points for grabs in the series, all three games hold huge importance for South Africa, who are at 11th place in the standings. "Every game for us is a big opportunity. (Janneman) Malan is back at the top, (Heinrich) Klaasen is back in the middle and also (Tabraiz) Shamsi is back." Playing XIs: India: Shikhar Dhawan (captain), Shubman Gill, Ruturaj Gaikwad, Shreyas Iyer, Ishan Kishan, Sanju Samson (wicket-keeper), Shardul Thakur, Kuldeep Yadav, Ravi Bishnoi, Mohammed Siraj and Avesh Khan South Africa: Janneman Malan, Quinton de Kock (wicket-keeper), Temba Bavuma (captain), Aiden Markram, Heinrich Klaasen, David Miller, Wayne Parnell, Keshav Maharaj, Kagiso Rabada, Lungi Ngidi and Tabraiz Shamsi /IANS

High inflation rate good for neither borrowers, nor investors

Address supply chain shocks if you wish to rein in inflation: Analysts