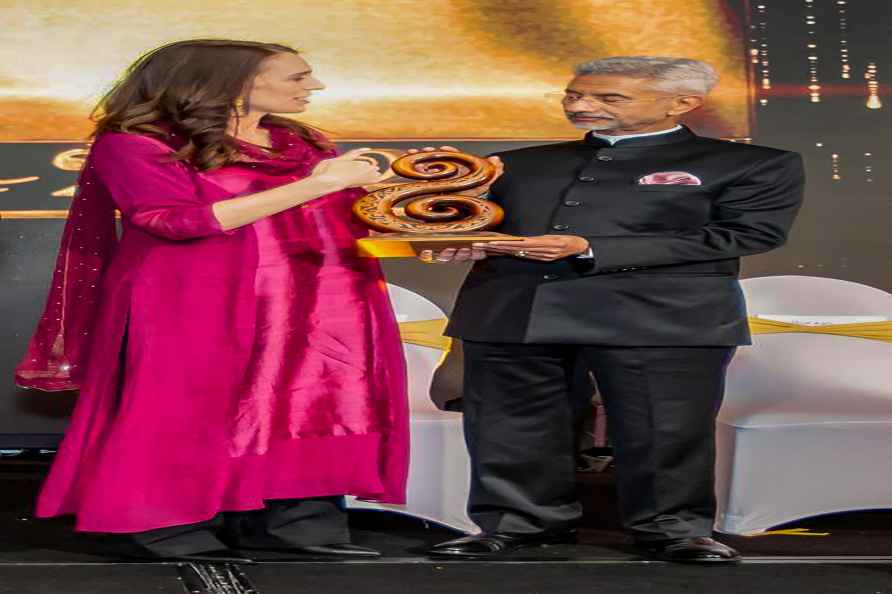 [**EDS: IMAGE VIA @DrSJaishankar ON THURSDAY, OCT. 6, 2022** Auckland: External Affairs Minister Dr. S. Jaishankar with Prime Minister of New Zealand Jacinda Ardern at the Kiwi Indian Hall of Fame Awards 2022 and the New Zealand launch of "Modi@20: Dreams Meet Delivery". ( /PTI] Auckland, Oct 6 : External Affairs Minister S. Jaishankar held talks with his New Zealand counterpart Nanaia Mahuta on Thursday here and discussed wide-ranging issues, including the visa issues being faced by Indian students, Ukraine conflict and security in the Indo-Pacific region besides other bilateral issues. Jaishankar, who was on a tour to the country, said in a joint press conference, "There was a discussion on some current, some pressing issues like the security situation in the Indo-Pacific, the consequences of the Ukraine conflict and naturally we spent some time on the major global issues, most of all climate action, climate justice." He said, "Some of the initiatives which India has been sponsoring over the last few years are the International Solar Alliance, the Coalition for the Disaster Resilient Infrastructure, the Initiative for the Resilient Island States and their importance of collaborating not just bilaterally, but with other countries to deal with contingencies like pandemics, which we know will surely recur at some point in time and, of course, other common concerns, maritime security for example." "I think we do recognise today that countries like India and New Zealand have a particular responsibility in forging a post-colonial order, which is fairer, which is more equitable, and which will provide the prosperity and stability to large parts of the world with which we are historically linked," he said. However, the large part of the conversation went to strengthening the bilateral relationship and the sum and substance of it was really an understanding that both should play to each other's strengths, which specifically meant business, education, technology, digital world, agricultural trade, talent, and most of all people to people connect because that's at the heart of both the societies. On the visa issue , he said, "We spoke a bit about the need for better air connectivity. I also raised with the Minister, concerns which some of our students have faced, students who had to leave New Zealand during the Covid period and who didn't have the opportunity to get their visas renewed.". "I urged a fairer and more sympathetic treatment for them, also students who are waiting to come to New Zealand to pursue their studies and whether the visa process for them could be hastened." He further said, "We also touched upon the skills demand in each society. There are perhaps demands in New Zealand which could be met out of India, and a mobility understanding with many countries, so the possibility whether those could serve as guidance for progress. "There was also a very open discussion on how India and New Zealand together will shape the larger region, the Indo-Pacific region," he added. Jaishankar is on a week-long visit to New Zealand and Australia. /IANS