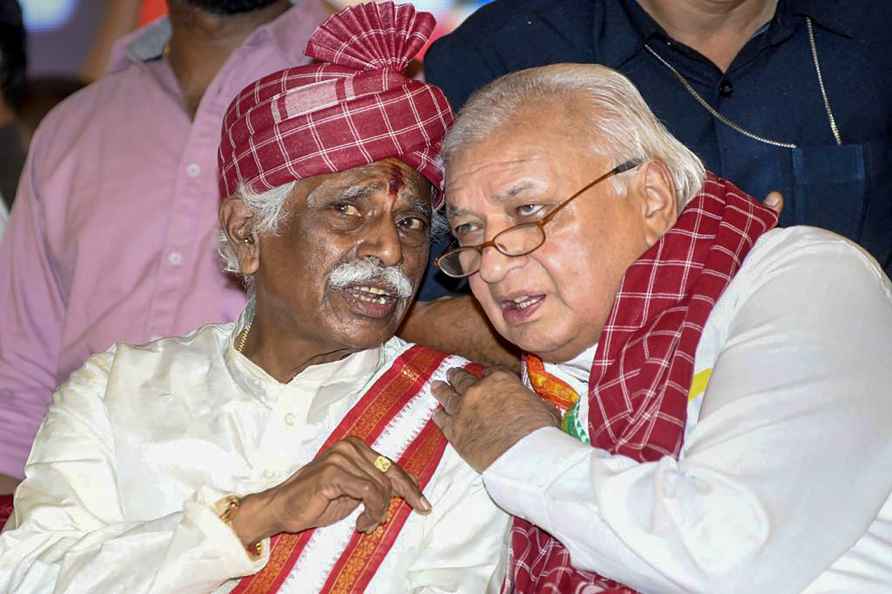 [**EDS: IMAGE VIA @RajBhavanHry** Hyderabad: Haryana Governor Bandaru Dattatraya with Governor of Kerala Arif Mohammad Khan during Telangana's famous Alai Balai festival in Hyderabad, Thursday, Oct 6, 2022. ( /PTI] Hyderabad, Oct 6 : Setting aside their political and ideological differences, leaders of different parties and eminent personalities from various walks of life came together at annual Dasara fete 'Alai Balai'. Haryana Governor Bandaru Dattatreya, who has been hosting the event for last 17 years, Kerala Governor Arif Mohammad Khan, union minister of state for chemicals and fertilizers Bhagwanth Khuba, veteran Congress leader V. Hanumantha Rao and Tollywood megastar K. Chiranjeevi attended the celebrations organised by the Alai Balai Foundation at the Exhibition Grounds here. Former Maharashtra governor Vidyasagar Rao, BJP leaders Ramchandra Rao and G. Vivek, Dattatreya's daughter Vijaya Lakshmi and others attended the event held every year a day after Dussehra. Bonhomie and enthusiasm marked the fete as the participants set aside their differences to greet each other. While Chiranjeevi was the centre of attraction, former MP Hanumantha Rao entertained guests by playing the drums. The event reflected the rich culture of Telangana as artistes displayed their skills through songs, dance and playing of various musical instruments. Personalities who fought for a separate Telangana state were felicitated along with others from fields like sports, literature and culture. Speaking on the occasion, Chiranjeevi described 'Alai Balai' as a part of Telangana culture. He said he had long been waiting to attend the programme. The former union minister said Dattatreya personally visited his residence to invite him for 'Alai Balai'. The actor said such programmes should be held across the country as it helps promote love, affection and brotherhood among people. Chiranjeevi recalled that in the past Pawan Kalyan and Allu Aravind attended the programme. He said it was because of Dattatreya's efforts and personal interest that 'Alai Balai' has gained popularity. He thanked people for the huge response to his film 'Godfather' released on Wednesday. /IANS