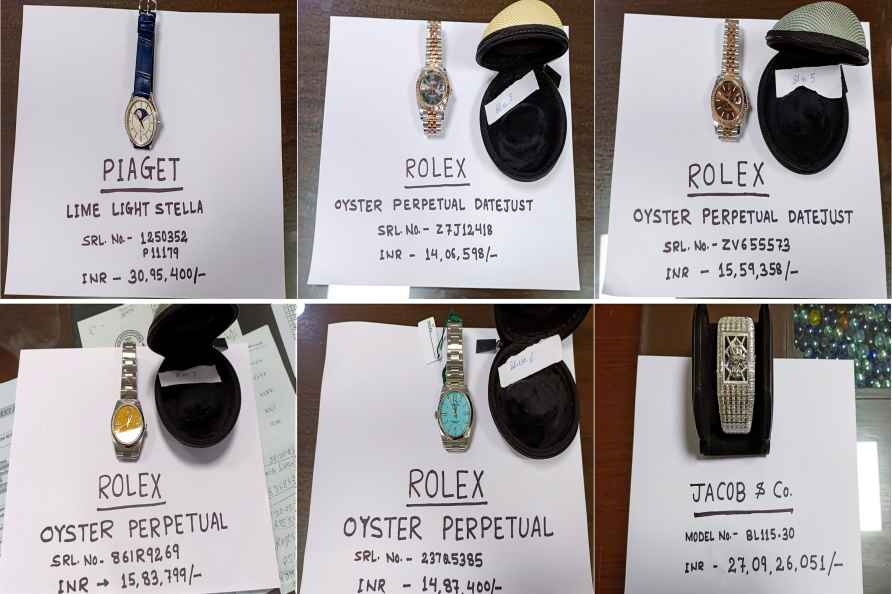 [**EDS: TO GO WITH STORY DES 18** New Delhi: Seven luxury wrist watches, including the one made of gold and studded with diamonds worth Rs 27.09 crore recovered from a man by customs officials at Delhi airport. ( /PTI] New Delhi, Oct 6 : The Customs official on Thursday said a man was arrested at the Indira Gandhi International Airport for smuggling one iPhone 14 pro and seven expensive wrist watches (out of which one was diamond studded) worth Rs 28 crore. A senior official said that the passenger was held on the basis of APIS Profiling. "We have booked a case of smuggling of seven highly precious wrist watches. One out of the four is an extraordinarily exorbitant, customized billionaire piece made of gold and studded with diamonds. One diamond studded gold bracelet and one iPhone 14 Pro was also seized," the official said. The official said that a detailed examination of the baggage and personal search of the passenger resulted in the recovery of the seven wrist watches, including Jacob & Co, Piaget Limelight Stella, Rolex Oyster, one diamond studded gold bracelet and one iPhone 14 having a total value of Rs 28,17,97,864," the official said. The said recovered goods has been seized under section 110 of customs act. The passenger has been placed under arrest in terms of section 104 of the Customs Act, as the offence being non bailable committed by him is covered under 135 of the Customs Act. /IANS