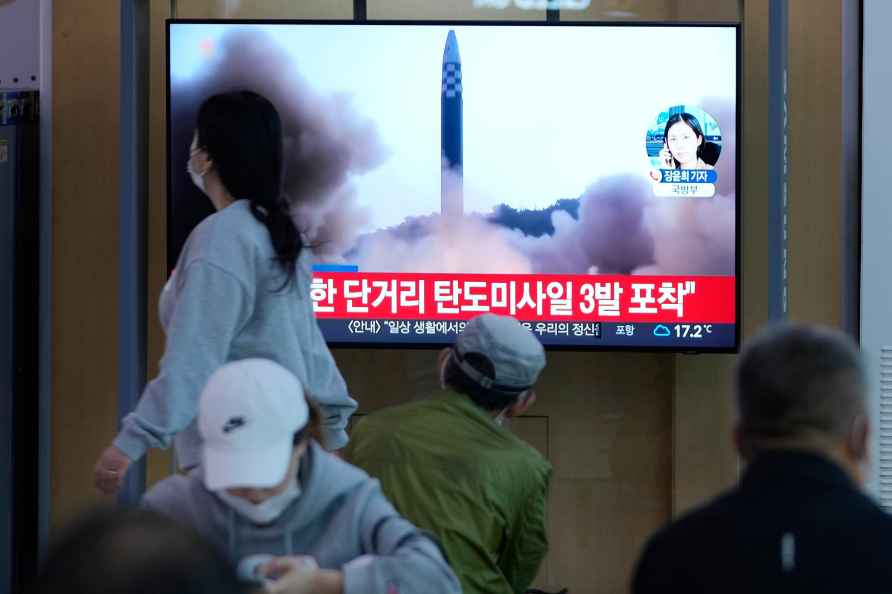 Seoul, Oct 5 : South Korea and the United States fired four ground-to-ground missiles into the East Sea on Wednesday in joint drills, a day after North Korea's intermediate-range ballistic missile (IRBM) launch, according to the South's military. The two sides each launched two Army Tactical Missile System (ATACMS) missiles, which precisely hit mock targets and demonstrated the allies' capability to deter further provocations, the Joint Chiefs of Staff (JCS) said. On Tuesday, the North fired an IRBM from Mupyong-ri in its northern province of Jagang in its first launch of an IRBM in eight months. It flew around 4,600 kilometers over Japan and landed in the Pacific, Yonhap news agency reported. The allies are maintaining a full readiness amid the possibility of additional provocations by the North, the JCS said in a press release without specifying the exact location and time of the drills. Residents in and around the eastern coastal city of Gangneung said they saw a bright flash and heard a strong roar apparently from the training at around 1:00 a.m. The South's military, meanwhile, fired one Hyunmoo-2 ballistic missile, but it fell within the base after an abnormal flight. It said there have been no casualties reported as it is looking into the exact cause of the incident. South Korea and the US held a joint air training Tuesday, in which a South Korean F-15K fighter fired two Joint Direct Attack Munition (JDAM) precision bombs at a firing range on a Yellow Sea island. /IANS

Israel strikes Gaza in response to rocket firing
Gaza, Dec 4 : Israeli fighter jets on Sunday carried out a series of airstrikes on facilities belonging to militant groups in the Gaza Strip in respon

Rocket fired from Gaza into Israel: Military
Jerusalem, Dec 4 : A rocket has been fired from the Gaza Strip into Israeli territory, causing no injuries, Israeli military and media reported.