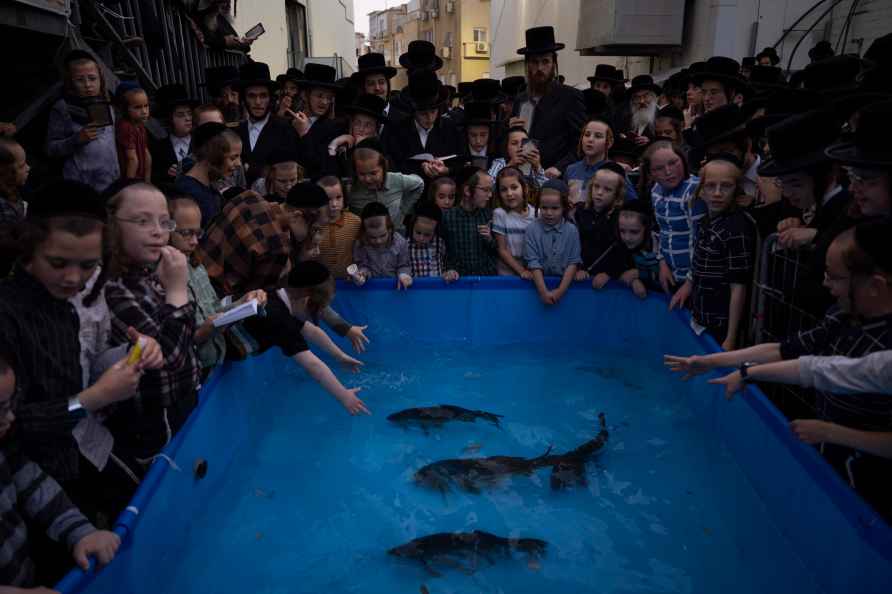 [Ultra-Orthodox Jews surround a plastic pool with water and fish as they participate in a Tashlich ceremony in the ultra-Orthodox Israeli town of Bnei Brak near Tel Aviv, Monday, Oct. 3, 2022. Tashlich, which means 'to cast away' in Hebrew, is the practice by which Jews go to a large flowing body of water and symbolically 'throw away' their sins by throwing a piece of bread, or similar food, into the water before the Jewish holiday of Yom Kippur, which start on Tuesday. /PTI] New Delhi, Oct 3 : The Supreme Court panel on freebies should fix a band of one per cent GSDP or one per cent of state owned tax collections or one per cent of state revenue expenditure for these welfare schemes of the states, according to a research report. With this, the desired welfare schemes can be implemented in a proper way, Soumya Kanti Ghosh, Group Chief Economic Adviser, State Bank of India, has said. Freebies have large fiscal costs and cause inefficiencies by distorting prices and misallocating resources. Some freebies may benefit the poor if properly targeted with minimal leakages, and the outcome may help the society in a more pronounced manner, as interest subvention to SHGs. However, during election campaigns, political parties promise many things like free electricity, free water, cheaper foodgrains, smartphones, laptops, bicycles and farm loan waiver, etc., which seem like motivating voters through promises and fulfilling them with taxpayer's money, Ghosh said. Besides, reverting to the old pension scheme by some states also seems to be a tool used by states for political purposes. For example, three states, namely Chhattisgarh, Jharkhand and Rajasthan have already reverted to the Old Pension Scheme or PAYG (pay as you go) scheme. Punjab is the latest one which is contemplating the shift. India had a PAYG scheme prior to 2004. Under this scheme, the contributions of the current generation of workers were explicitly used to pay the pensions of current pensioners. Hence a PAYG scheme involved a direct transfer of resources from the current generation of taxpayers to fund the pensioners. It seems that the states moving back to the old schemes want to save money currently and use the amount to give freebies to gain popularity. However, it must be emphasized that the money for pensions would be collected from the tax payers in future. It also seems unfair that only a certain section of people get this benefit of pension. The pension liabilities of three states Chhattisgarh, Jharkhand and Rajasthan is estimated at Rs 3 lakh crore. When looked at in relation to their own tax revenue, pension liabilities of states is quite high for Jharkhand, Rajasthan and Chhattisgarh at 217 per cent, 190 per cent and 207 per cent respectively. While for states contemplating the change, it would be as high as 450 per cent of own tax revenue in case of HP, 138 per cent of own tax revenue in case of Gujarat and 242 per cent of own tax revenue for Punjab. Â  If we look at the state budgets, election promises recently made for forthcoming state elections range from 0.1 - 2.7 per cent of GSDP for different states and around 5-10 per cent of own tax revenue of the states, the report said. Further, there are contingent liabilities on the states which have been rising in recent years. As per the latest available information, the off-budget borrowings by states - loans raised by state-owned entities and guaranteed by the state governments - have reached around 4.5 per cent of GDP in 2022. The extent of such guarantees have achieved a significant proportion of GDP for various states. The guarantee amount is significant at 11.7 per cent of GDP for Telangana, 10.8 per cent of GDP for Sikkim, 9.8 per cent of GDP for Andhra Pradesh, 7.1 per cent of GDP for Rajasthan, 6.3 per cent of GDP for Uttar Pradesh. While the power sector accounts for almost 40 per cent of these guarantees, other beneficiaries include sectors like irrigation, infrastructure development, food and water supply. Â  If we include the contingent liabilities along with freebies, then they come around 10 per cent of the GSDP for all the states combined. We must find a solution to this all-encompassing problem of fiscal hara-kiri, the report said. Â  Â  A recent argument to support freebies finding favour with some puritans is quoting the haircut taken by banks through the IBC mechanism. Equating the haircuts with freebies or even the loan write-offs is at best a deeply flawed argument as the promoters cede control of businesses regardless of whether the default triggering admission into CIRP (Corporate Insolvency Resolution Process) is for genuine reasons or otherwise. Additionally, such loan write offs are purely technical in nature and are added back to bank books once recovered, the report said. /IANS