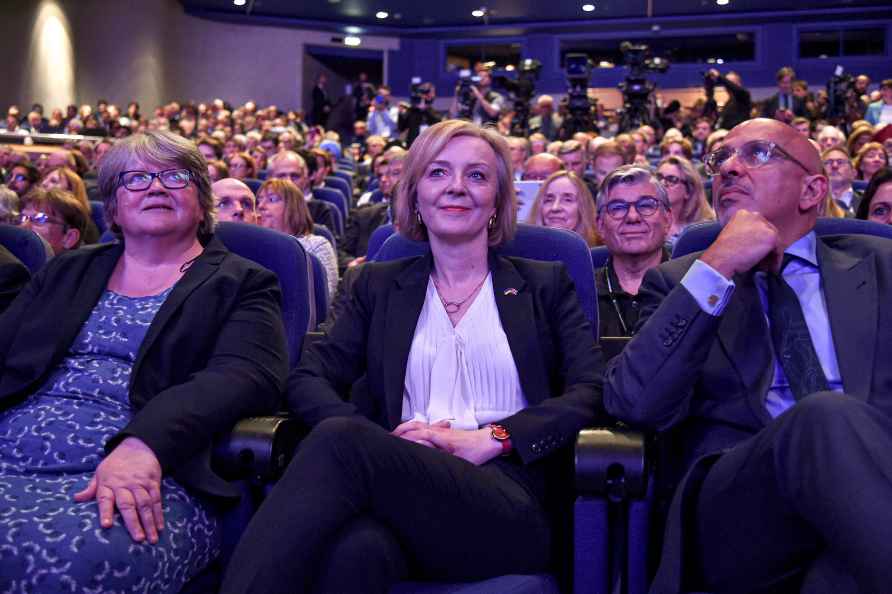 [Britain's Prime Minister Liz Truss, Chancellor of the Duchy of Lancaster Nadhim Zahawi, right, and Health Secretary Therese Coffey listen to Britain's Chancellor of the Exchequer Kwasi Kwarteng speaks at the Conservative Party conference at the ICC in Birmingham, England, Monday, Oct. 3, 2022. The British government has dropped plans to cut income tax for top earners, part of a package of unfunded cuts that sparked turmoil on financial markets and sent the pound to record lows. /PTI] London, Oct 3 : The UK government has U-turned on plans to scrap the 45p rate of income tax, the chancellor has confirmed, BBC reported. Kwasi Kwarteng told BBC that the proposals, announced just 10 days ago, had become "a massive distraction on what was a strong package." "We just talked to people, we listened to people, I get it," he added. The decision, which marks a humiliating climbdown for Prime Minister Liz Truss, comes after several Tory MPs voiced their opposition to the plan, BBC reported. Ex-cabinet minister Grant Shapps had warned the Prime Minister would lose a Commons vote on the proposal. The plan to scrap the 45p rate, paid by people earning over 150,000 pounds a year, had been criticised as unfair at time of rising living costs. On Sunday, the Prime Minister had told the BBC she was absolutely committed to it as part of a package to make the tax system "simpler" and boost growth. But the measure has seen remarkable opposition from the markets, opposition parties and a growing number of Tory MPs. Increasingly, it seemed that Ms Truss did not have the numbers to get it through. On Sunday, senior Tory Michael Gove hinted he would not vote for the plan when it came to Parliament, saying "I don't believe it's right". The former cabinet minister said that the PM's decision was "a display of wrong values." Shapps also urged Ms Truss to U-turn, warning her not to have a "tin ear" to voters' concerns about rising living costs. "I don't think the House is in a place where it's likely to support that," he told the BBC on Sunday. The U-turn, suggestions of which were first reported by the Sun, comes on the second day of the Conservative conference in Birmingham, with Kwarteng due to speak later on Monday. The pound jumped on the news, rising by more than a cent against the dollar to $1.1263. /IANS